Restaurants called Chez Tonton (Uncle’s Place) usually offer foie gras, cassoulet and other hearty, classic French dishes. Here though, the uncle in question is in the kitchen, and before that he lived in the Dongbei region of China where apparently the food is a little special and certainly not at all what most Chinese restaurants serve in Paris.

The restaurant isn’t far from our hotels, so we decided to go down and try out this unusual cuisine!

We might as well tell you straight away – Chez Tonton will not be to everyone’s taste, and definitely not what you expect.

Opened about 18 months ago, the first thing you are confronted with (apart from the masking tape around the windows, forgotten after the last paint job) is the menu with a long list of things that you cannot order there: no nems, no shrimp dumplings, no fried noodles, no sauce and above all no first courses or desserts. Wow. 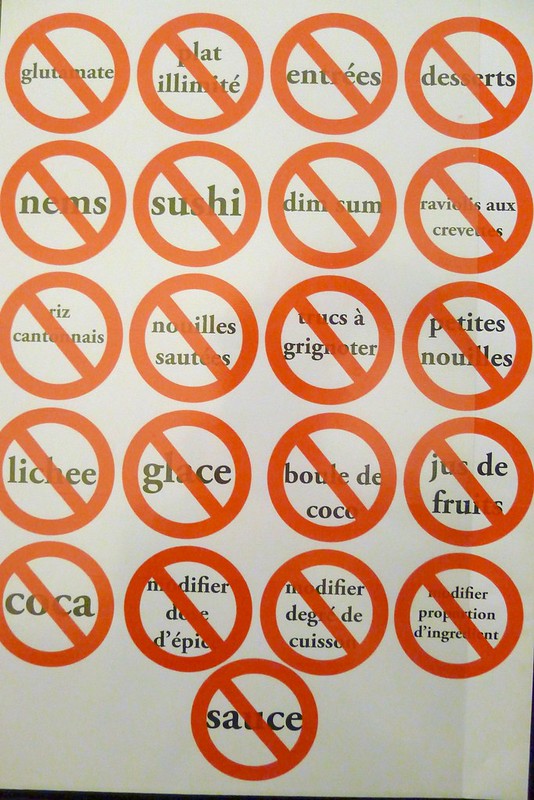 Some people might find this approach a rather negative way to start a meal, and it’s a concept that won’t appeal to everyone, but there is a reason, as our waitress Jianan explained.

It’s her ‘tonton’ who is in the kitchen (in the basement), and as the restaurant’s website explains (in French), ‘tonton’ only prepares dishes from his part of China, a region about the same size as France; carefully crafted and naturally healthy dishes made from fresh produce he buys at the market with his neice.

If you think not having 200 dishes to choose from means a lack of choice, you’re wrong. The menu is several pages long, with detailed and enticing descriptions of the dishes, their ingredients and how they are cooked. There are both cold and hot dishes, some spicy, some not, and although there may not be any shrimp dumplings, you can alway try the shrimp fritters instead…

As for the space itself, it couldn’t be simpler, with plain white wall and almost no decoration at all. 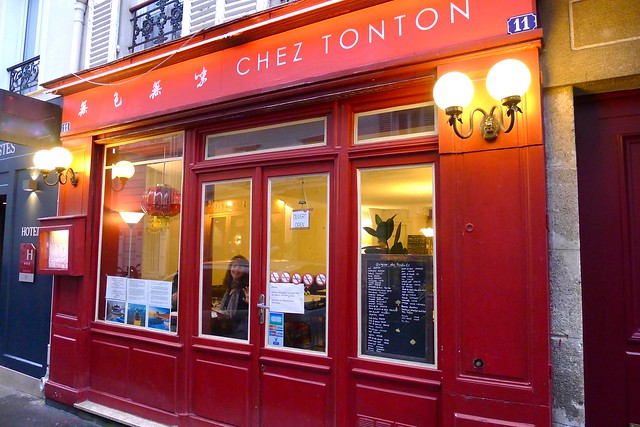 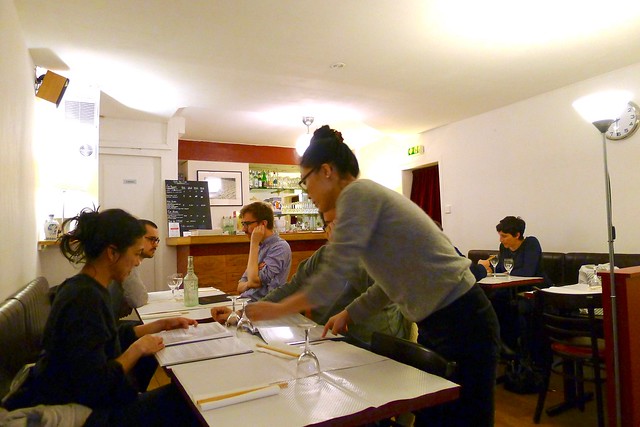 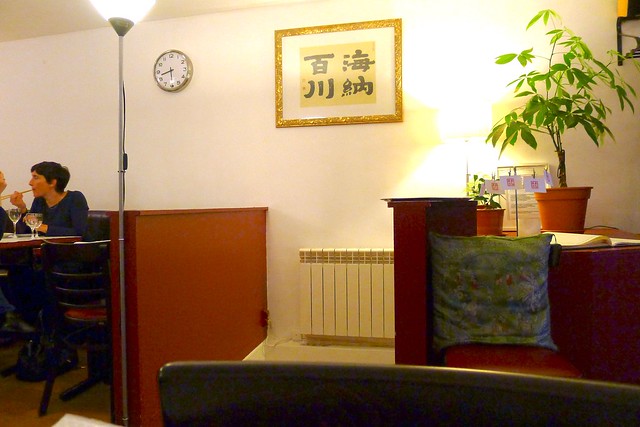 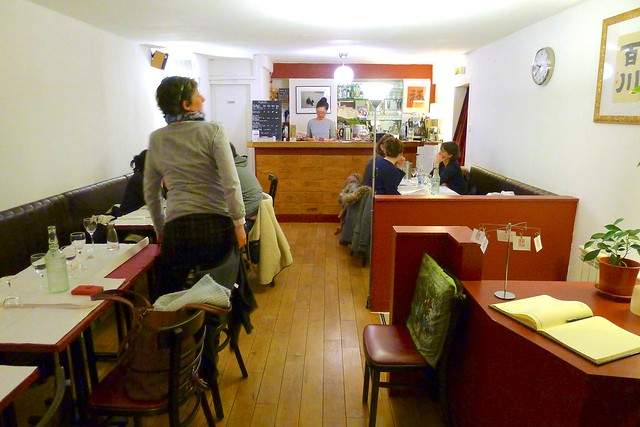 We ate one dish each – quite sufficient for a main meal – but apparently the Chinese tend to order several and share with the whole table, even if that means some food not getting eaten.

The first was “Cajou nuts and prawns. Lots of cajou nuts and shelled prawns, a little red pepper for colour, a pinch of potato flour, a touch of spiced oil and salt“.

The potato flour thickened the dish a little, but my companion had to say in all honesty that she thought it lacked seasoning and was thus a little bland. She would have loved a little sauce to go with it, except they don’t do sauce at Chez Tonton. Shame…

The style of cuisine is not one full of mind-blowing flavours, but it’s definitely prepared with care and love. 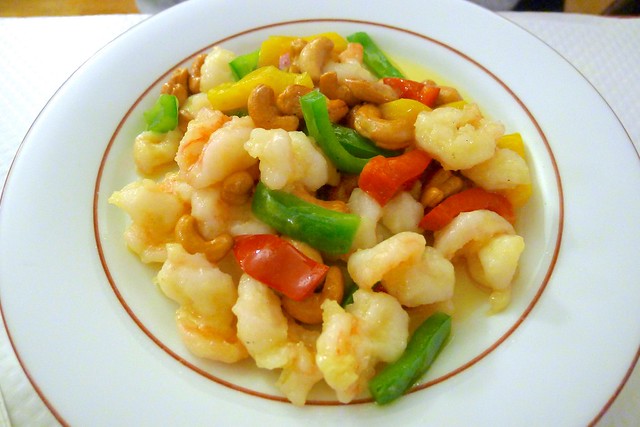 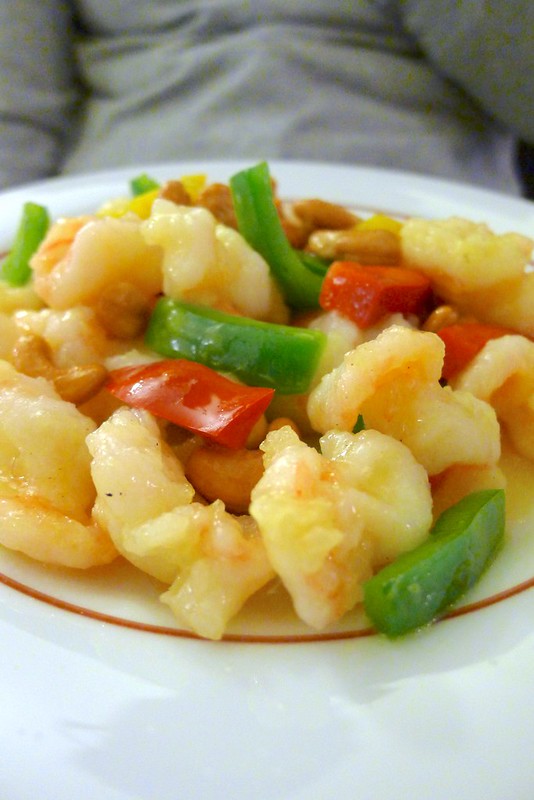 The second dish was chosen for its intriguing description:

With each order, Jianan explains what you are going to get (not sure how good her English is – there’s not English menu, that’s sure). For this dish, we were warned that it would arrive swimming in oil, but that this was necessary to give the aubergine the required amount of spice.

And indeed it did arrive very oily. Although the deep fried aubergine wasn’t crunchy at all as we had imagined it, the spiciness was well dosed and we’d never eaten anything like it!

Even all that oil wasn’t a problem, and we had no tummy problems later on – quite a surprise! 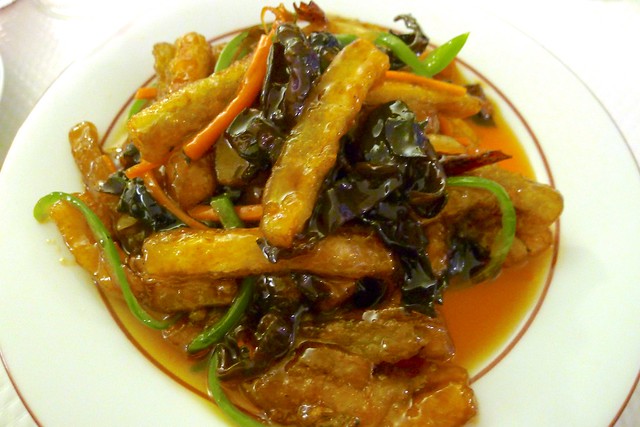 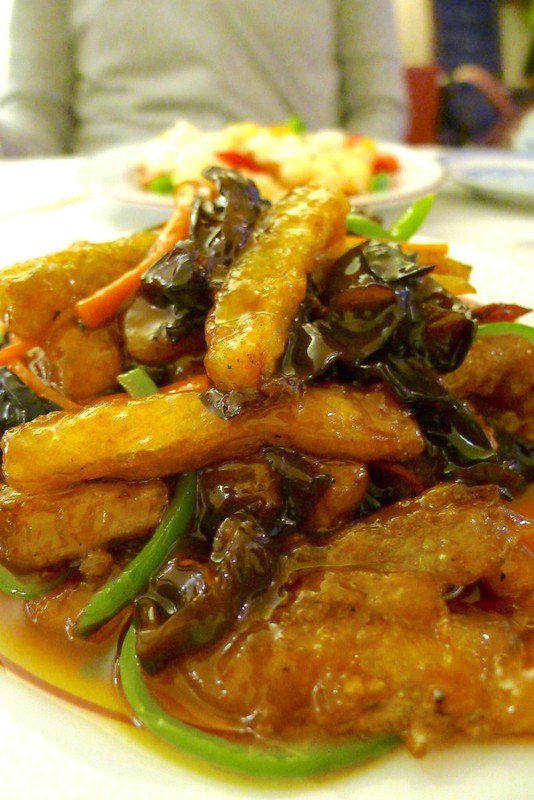 We couldn’t resist taking a quick shot of two other dishes waiting to be served, both displaying the apparent simplicity of the cuisine (not to be underestimated).

The restaurant’s concept may be a little draconian for some, but for a meal out of the ordinary, Chez Tonton is worth considering. 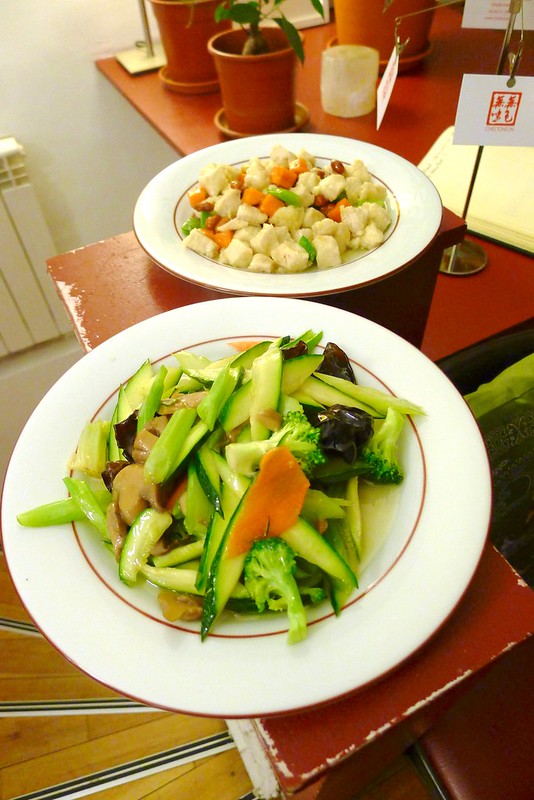 Despite all that, we still really fancied a dessert! And the advantage of Paris is that you are always spoiled for choice.

We thus decided to walk two minutes to La Rotonde, the venerable Montparnasse brasserie that’s always a safe bet. Saying that we just wanted dessert and no main dish posed no problem whatsoever, and we were very warmly welcomed.

It’s a typically Parisian place and we were super pleased to attack some chocolate ice cream. A radical change of scene… 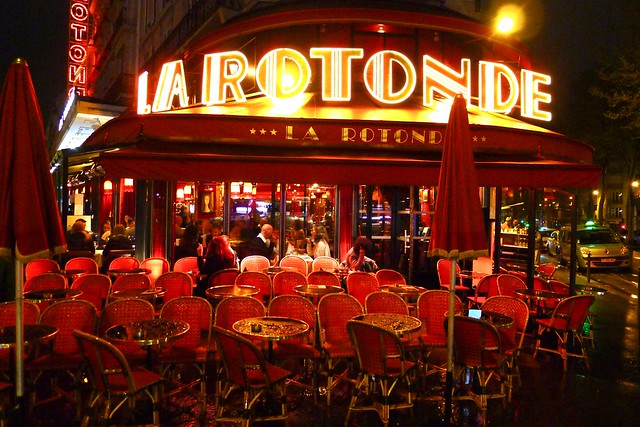 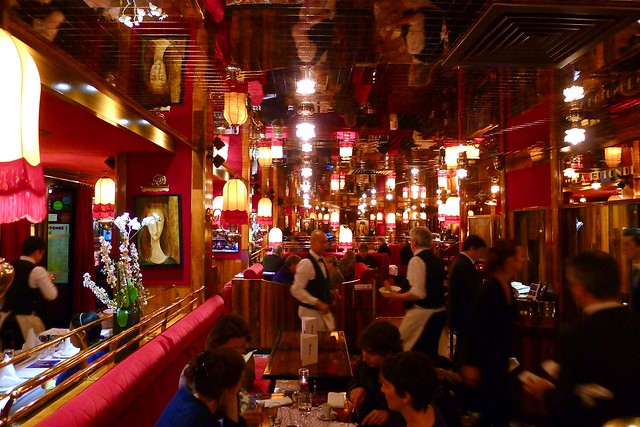 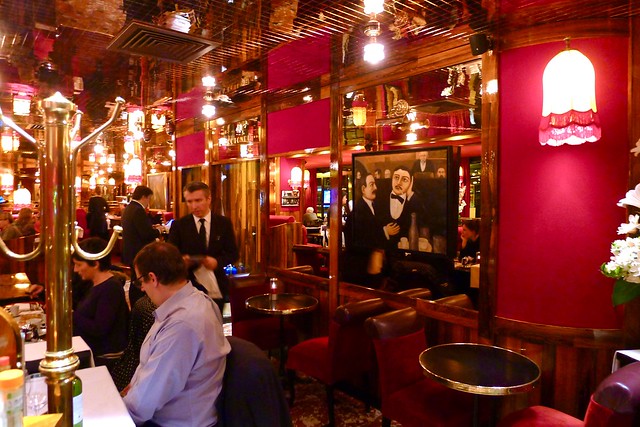 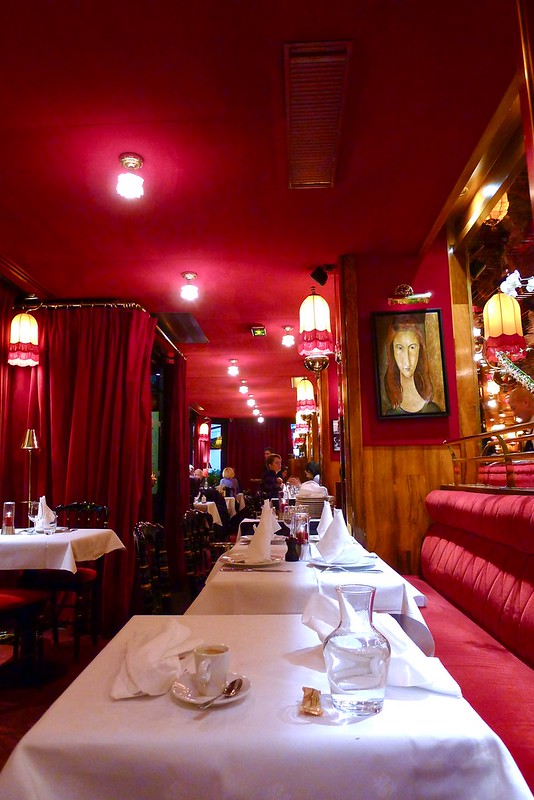 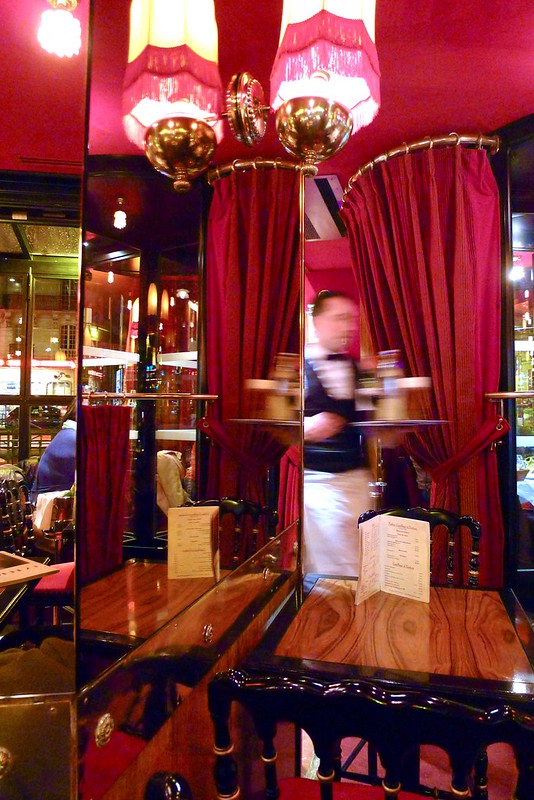 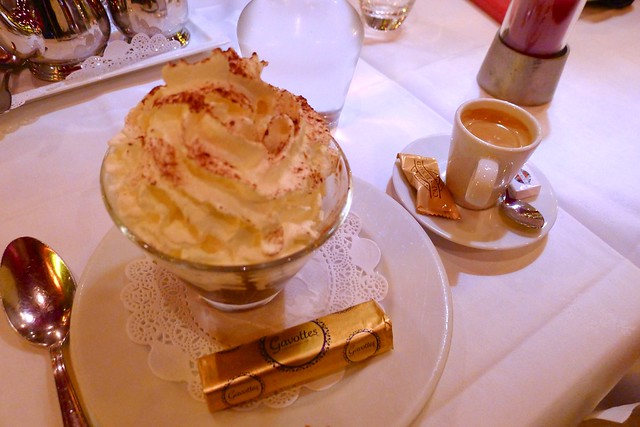 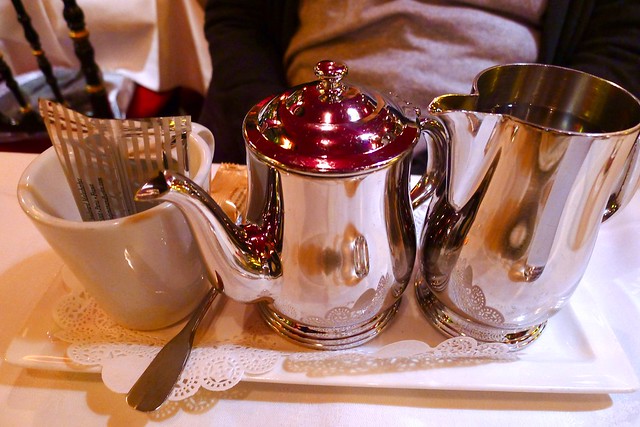 Being able to mix Chinese food and traditional French desserts in the same evening is one of the joys of being in Paris. It was an odd night out, but one we’ll remember for a while!