The restaurant of the Paris Mosque

A nice place to discover…

The Great Mosque is built on the site of the former Pitié Hospital. It was erected to pay homage to the 100,000 Muslims who died during the First World War, and inaugurated on 15th July 1926 by the French president Doumergue.

In a Hispanic-Moorish style, inspired by the Mosque at Fez, the interior decoration was made by north African craftsmen who only used elements (such as mosaics) that came from their own countries.

The ParisMosque located next to the Jardin Des Plantes in the 5th arrondissement. It’s a place of prayer but also of relaxation with a (famous) Hammam, tearoom and restaurant.

. We thought it would be a good idea to eat there after having seen the nearby exhibition,“Dragons, between science and fiction”. Making a reservation in advance was also a good idea! 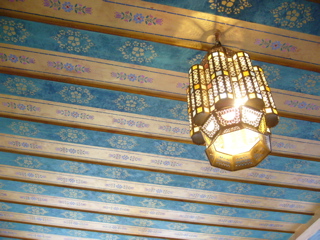 The restaurant is huge, with a whole suite of rooms leading off each other, and when we arrived (1pm) the place was packed. You’ll love the superb décor, both elaborate and colourful.

However, don’t expect big smiles from the staff, as their hospitality leaves a little to be desired. The food could also be better (although it’s not bad), but the couscous is quite light (good for the figure!), the mint tea delicious and the Tagines quite tasty. Our filo pastry ‘bricks’ were good too and the egg ‘chachouka’ was cooked to perfection. 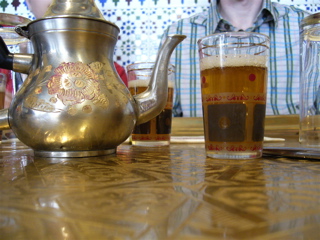 The shady courtyard with its trees and birds is always packed in summer, and this is a place that you should at least stop by at. It’s just a shame the staff aren’t a bit friendlier.