A visit to Cineaqua, the Aquarium at Trocadéro in Paris

It’s hard to believe that Paris once had the biggest aquarium in Europe. Built in 1878 for the Universal Exhibition of 1889, it was later closed, renovated and re-opened in 1937 before being closed again – permanently – in 1985, as the structure had become dangerous.

At the end of the 1990s came a new project to bring the aquarium back to life. However, the troubles were to continue. After several administrational squabbles and minor scandals (including the contract being cancelled despite the aquarium being practically finished), the Paris council has finally leased the site to a private company for the next thirty years. They have completely renovated and rebuilt the place as a huge modern aquarium, although it also houses animation studios and cinema auditoriums. So here are some figures about Cinéaqua, the name for the new “Aquarium Du Trocadéro” in Paris that finally opened its doors in Summer 2006 : The visit takes you from the source of the Seine, into its estuary, the Channel, then on to the Atlantic, Mediterranean, and around the coast of the French territories such as Polynesia and Guyana, showing you the fish and other sea life in each area. Highlights include watching the feeding of the sharks (around 4pm) in the biggest aquarium, with running commentary and two divers (one is there just to protect the other!), the fish touching pool – where kids can lean in and stroke fish! – and drawing lessons, where your child can colour in pre-printed drawings of fish. You can either take the visit as a lesson, or just wonder at the diversity of the animals on show. Also, there are little animated films along the way that keep the children more than happy.

There were however certain things we didn’t really like.

Firstly, it’s a bit pricey (19.50 euros for adults and 12 euros for kids over three years old). Secondly, there was a really awful art exhibition in the middle of the visit that is one of the ugliest things I have seen for years, and had absolutely nothing to do with fish! Thirdly, probably for financial reasons, the complex includes an extremely expensive Japanese restaurant (well, we are opposite the Eiffel Tower after all), where you can overlook the aquarium (great!) and eat raw fish (not great!). Surely this has to be one of the most doubtful concepts ever devised…

All in all, we had a great time at Cinéaqua, as the huge aquariums are amazing, although we would advise you to avoid peak times like Saturday afternoon. If you can afford the entrance fee, your kids will definitely be delighted.

CineAqua is open 364 days a year (closed Christmas day) at the following times. Mon-sun : 10am to 8pm. Last entry at 7pm

Photographs by JasonW : more pictures of the aquarium 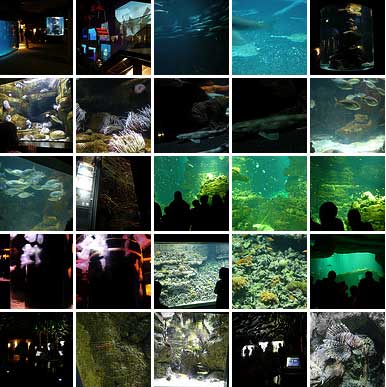