Aquarius, a vegatarian restaurant in Paris

The 14th arrondissement doesn’t have the reputation of being particularly interesting, or fun, or attractive. Oh dear. However, we’re ready to make an effort if it seems worth it, and a friend had recommended we try Aquarius, perhaps the oldest vegetarian restaurant in the city (founded in 1980).

So was it crusty and dry, or lush and delicious? Read on… 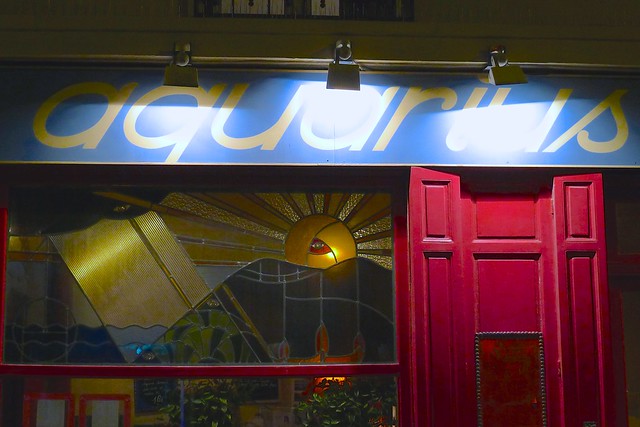 The French love their meat, and France is probably the least vegetarian-friendly country in Europe, but Paris has lots of foreign visitors, so it’s only logical that the city have at least a few decent veggie restaurants. Whether it’s for visitors or not, Aquarius has been serving vegetarian food for nearly 35 years, quite a feat.

If you’re mad about French chic, and our talent for interior design… you are going to weep upon entering Aquarius. There’s a high chance that the interior hasn’t been redone since the day they opened. The colours are ugly beyond belief. The pictures aren’t hung straight. The lighting is appalling. Don’t even get me started on the ceiling.

It’s probably one of the fugliest interiors I’ve ever seen in a restaurant. 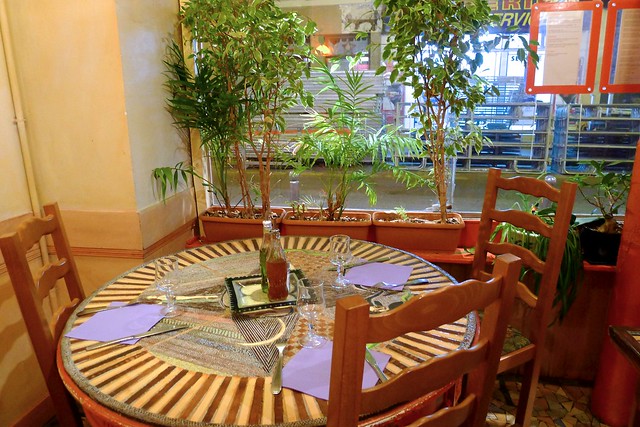 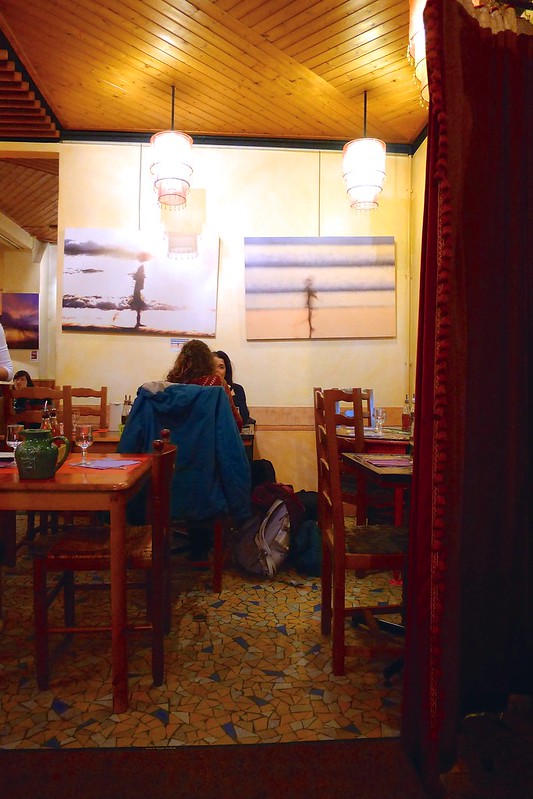 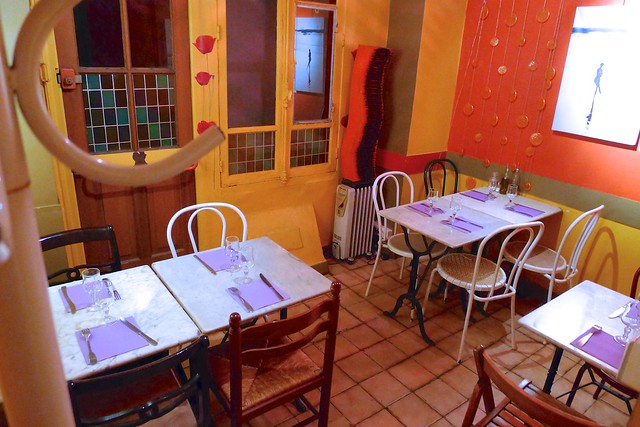 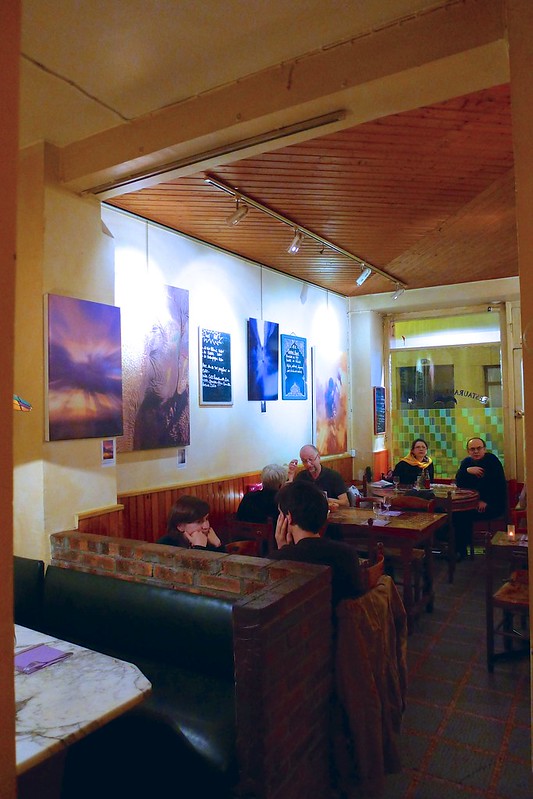 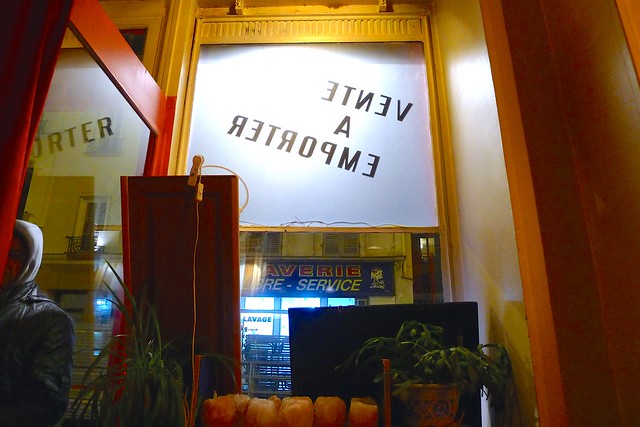 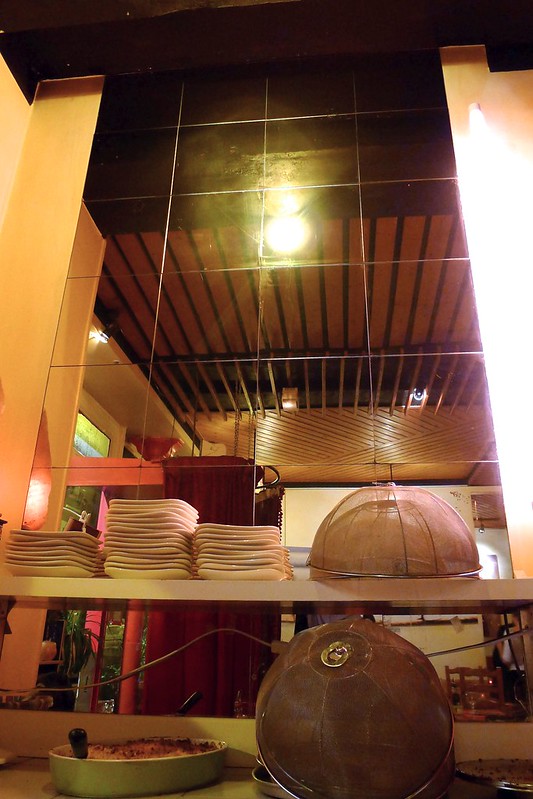 The waitress is smiley but expeditious (well she does the entire place to serve by herself) and service is a little, e, random. For example, we were already seated and choosing what to eat from the menu when an Indian gentleman arrived. He spoke English only , and the waitress kindly used her broken English to answer his questions, however nonsensical they were (like “are lentils better than chickpeas?”). He had a lot of questions, and the waitress took his order directly afterwards.

This meant we were treated to a ten-minute conversation in stilted English between an Indian man and a French woman, and he got served before us! During the whole thing, other diners were arriving, and the waitress just waved them on saying “Site wherever you like”. I got the impression they would be waiting quite a long time – even longer than us – before ordering.

For some reason, a vegetarian restaurant in France has to be ugly and disorganised. In the 21st century, that’s just silly.

The good news was that we had easily found tasty-looking dishes on the menu for our meal, and – even better – the restaurant served alcohol! We went for a pitcher of house red, which was reasonably priced and very good.

The vegetable paté was tasty, but the ‘grilled toast’ that was supposed to accompany it was nowhere to be seen. The other starter, a (vegan) salad of marinated seaweed was interesting in the mouth and surprisingly tasty. While both were served quite generously, it has to be said that presentation was a little bland. Both dishes looked like they had been teleported from 1975. 🙁 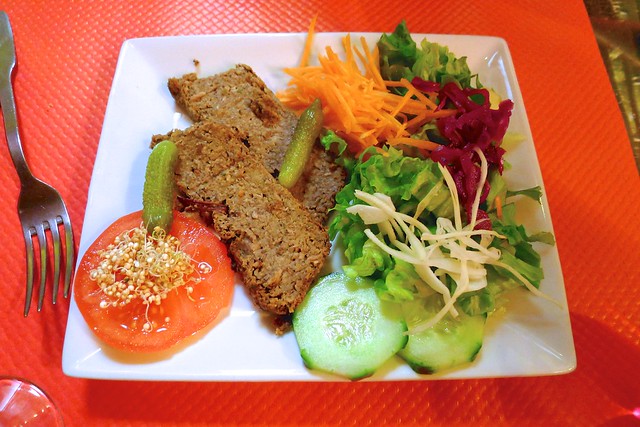 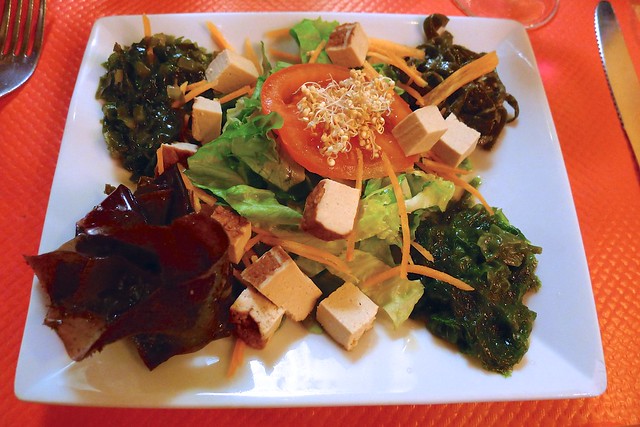 For our first main dish, we had chosen the nut roast, which turned out to be just two thin slices with lots and lots of vegetables. The sauce was great, and there was even blackcurrant jelly (like a real roast) but a little more roast would have been appreciated.

Nevertheless, it was copious and very tasty (especially the sauce). 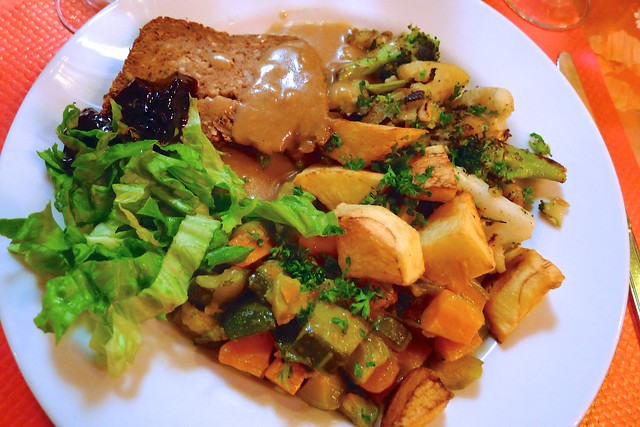 The other main dish was a vegetarian couscous, a dish of the day that turned out to be extremely copious (part of it was even serve on a second dish), varied and tasty. After a first course and main course we were both pretty full. 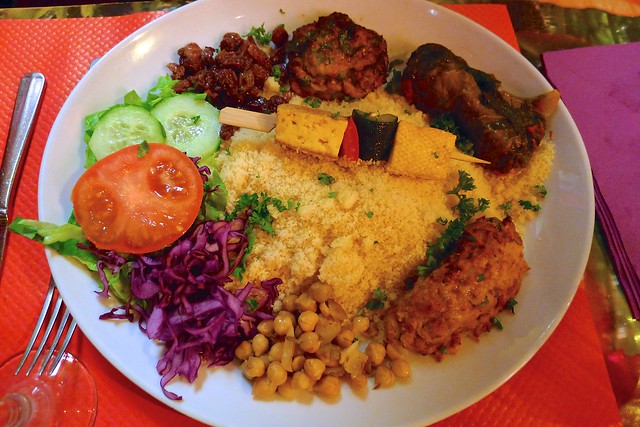 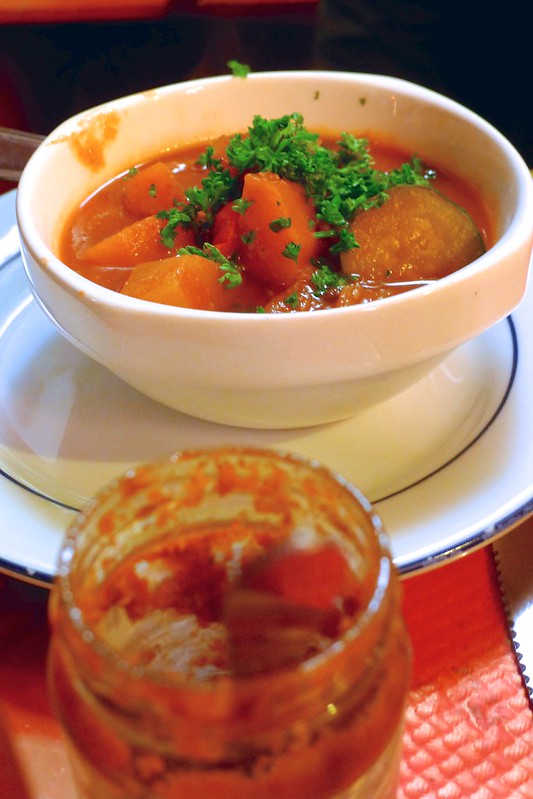 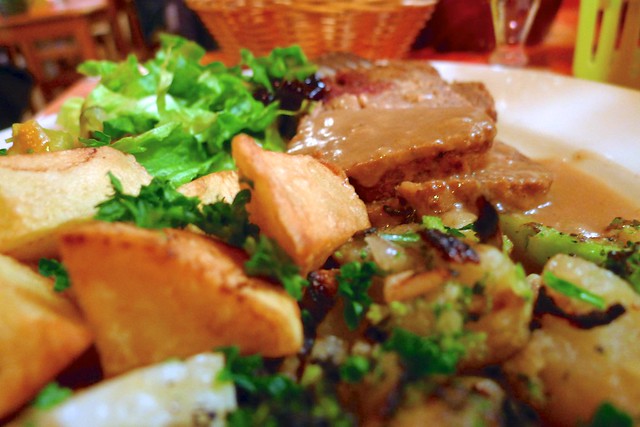 Of course, not even being full could stop us from tasting dessert! The strawberry cake (dessert of the day) and cheesecake finished us off completely. Both were creamy and fresh, a lot better than certain supposedly smarter restaurants we could mention. Bravo! 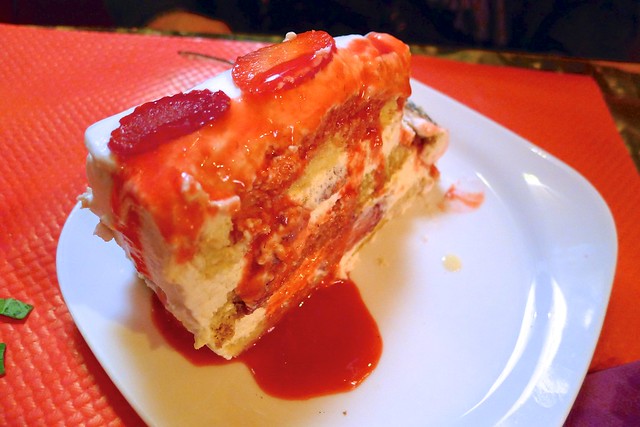 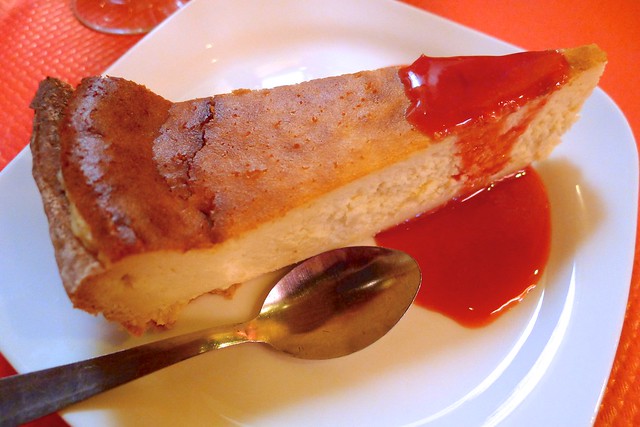 So, despite an interior that would make Philippe Starck hyperventilate, Aquarius has been going for nearly 35 years, which must mean something. All their dishes are cooked on site (and you can tell) and the prices are extremely reasonable, with a fixed price two-dish evening menu et 17€. That’s very rare in Paris!

Don’t expect a designer setting, don’t be in a hurry (these things take time) and you’ll eat a good vegetarian or vegan meal for a very decent price. With so few good vegetarian options in Paris, it would be cruel not to recommend Aquarius. 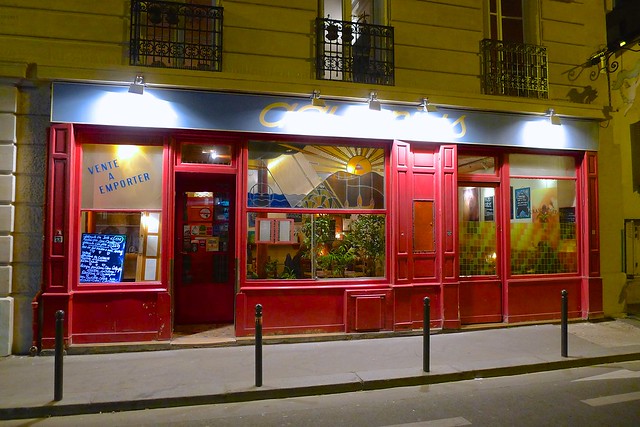 To check out all our photos of the Aquarius vegetarian restaurant, click the play button below, then click the four little arrows bottom right to go into fullscreen mode.