The AG restaurant in Saint-Germain-des-Prés

Inventive, fresh, unpretentious, copious… the food prepared by chef Alan Geeam has a lot going for it. His second restaurant, the AG (geddit?) in the heart of Saint-Germain-des-Prés, very close to our hotels, deserves to be full to bursting, as indeed it was the night of our visit.

Here’s how our evening went.

Opposite the Marché Saint-Germain in a fairly quiet street which will soon be home to Paris’ thrid and biggest Apple Store (1,300m²), the AG has a long but rather thin terrace (for more space and greenery, you really should try the secret garden at la Belle Juliette) and minimalist interior design with an art déco edge (like Le Baume!). 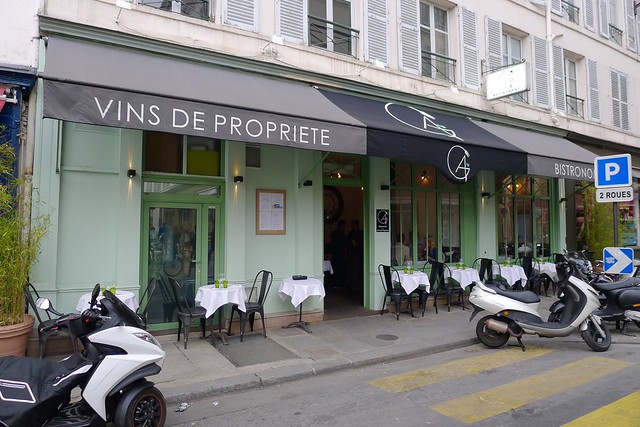 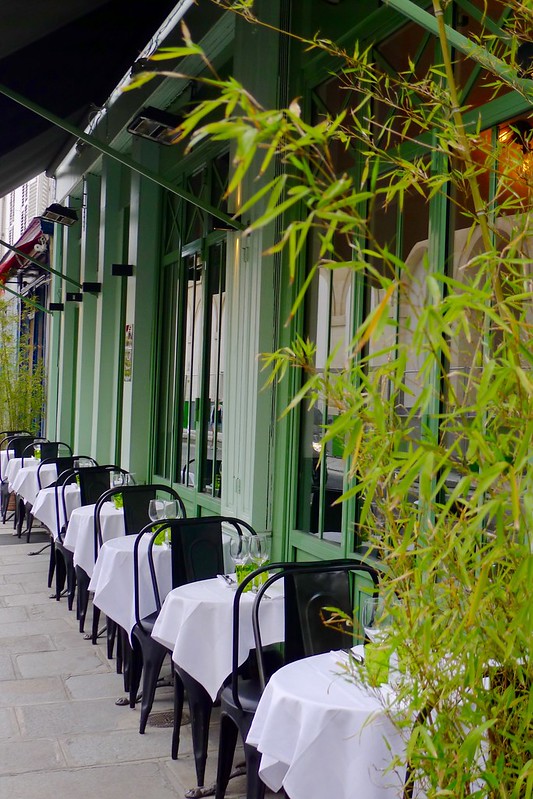 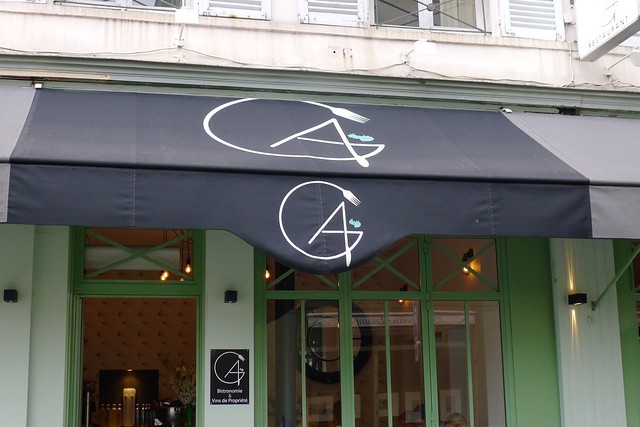 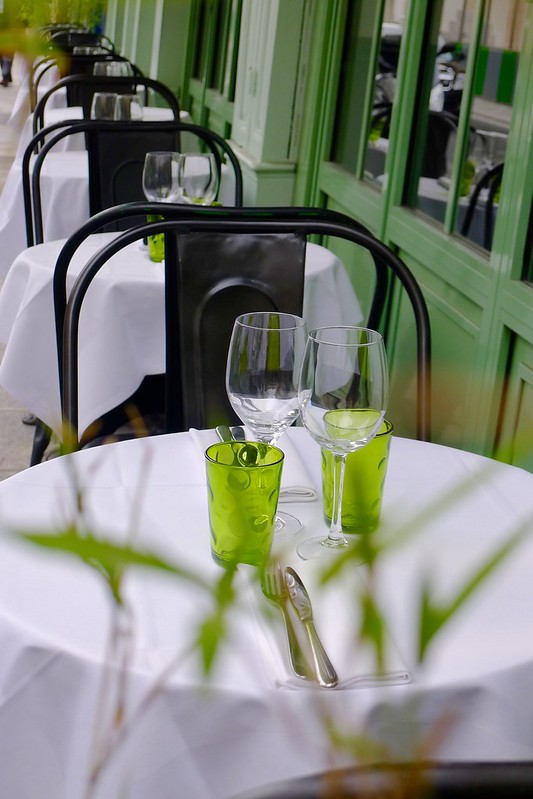 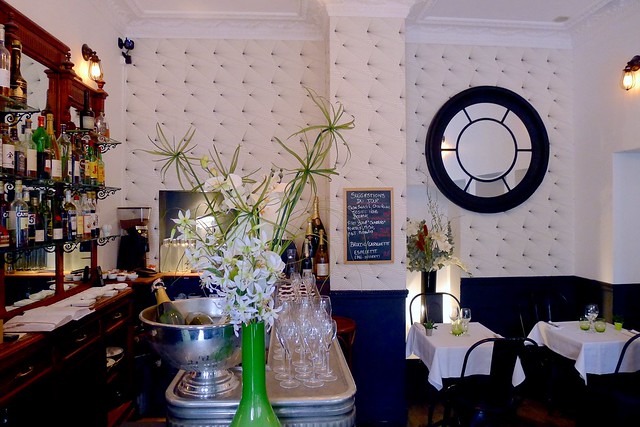 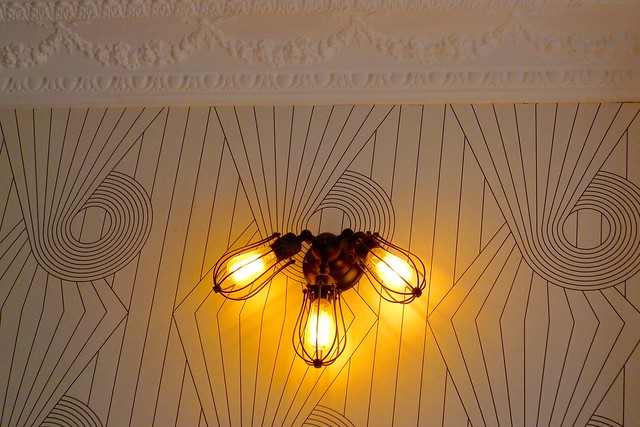 The restaurant has a range of fixed price menus that aren’t excessively priced for the neighbourhood – 22€ for two courses at lunchtime, 40€ for three courses in the evening and a tasting menu of five dishes for 58€, with an optional five-glass wine accompaniment for 20€.

À la carte you’ll find five choiced for each course, plus a few daily specials (expect to pay 20-30€ for a main dish). We decided to go for the 40€ three-course menu which seemed plenty.

For the first course, we chose the daily special – ‘snack-style’ tuna with black sesame seed, red cabbage and beetroot – and a soft-boiled egg with mushroom caviar and thin crispy bread slices.

The tuna melted in the mouth as if it had been cooked (despite being served almost entirely raw), but the black sesame seed were more of a decoration than a taste sensation. It was a nice sensation to chew, but not excessively strong-tasting.

The soft-boiled egg was perfectly cooked, neither too hard or too jelly-like, and the mushrooms were subtle without being absent. The crispy bread was a good counterpoint to the mushrooms, making for an interesting mix of tastes and textures.

Even before these two dishes arrived, we were served a little pot of creamed asparagus and scampi, together with some delicious sliced brown bread. They certainly know how to treat you right at the AG!

A special mention should go to the presentation too – very artistic with lots of little salad leaves and flowers. It’s obvious they pay special attention to composition and colour as well as taste. 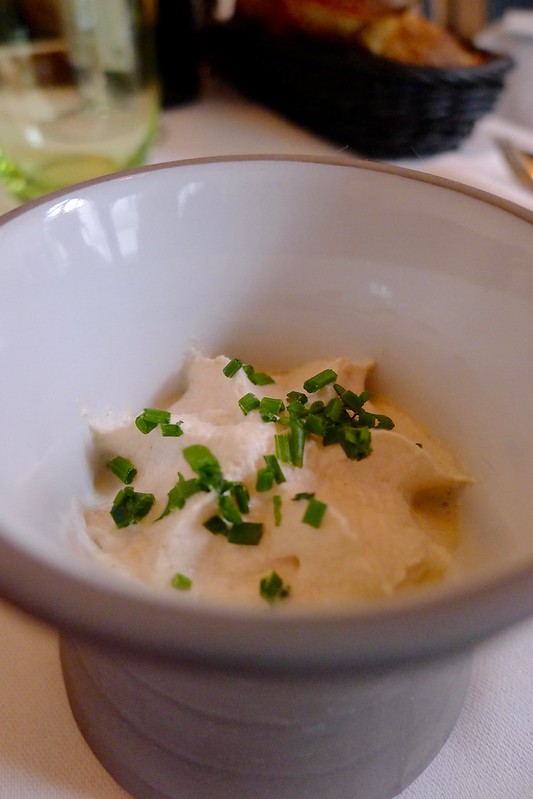 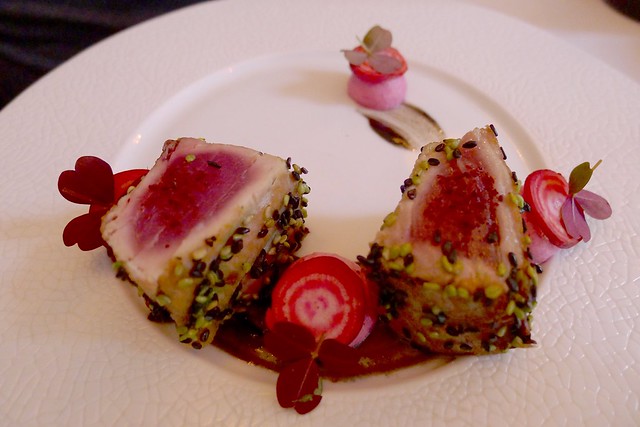 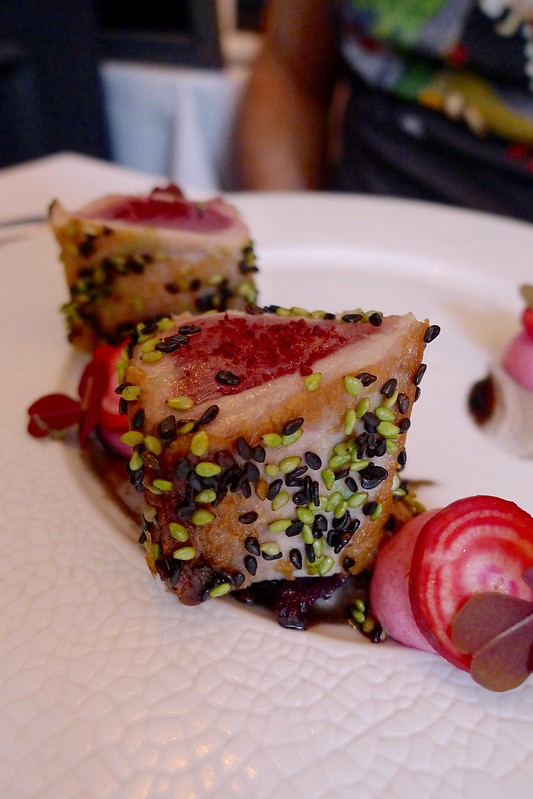 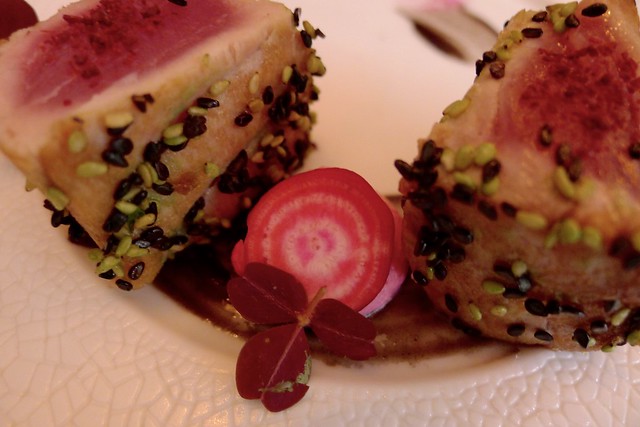 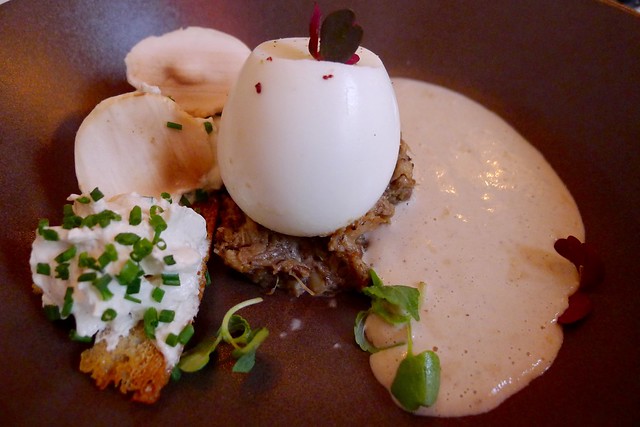 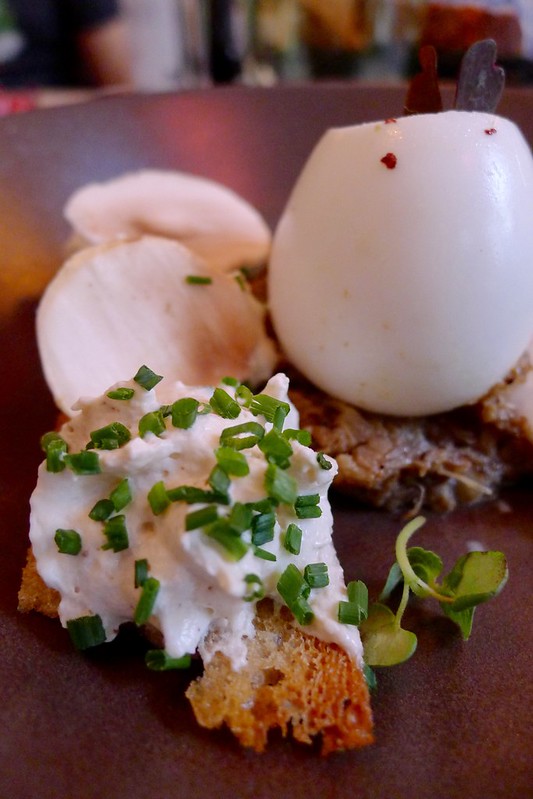 For the main dish we chose the vegetarian option, and cod with French-style peas and a mousseline of spinach and green tea.

The vegetables were great, spectacular-looking, tasty, cooked to perfection and served with a multitude of aromatic herbs and placed on a bed of black rice risotto which was melt-in-the-mouth and creamy without being too rich.

The cod was also perfectly cooked, and the dish looked like a modern art painting with its swathe of spinach. We weren’t sure we could taste the green tea in it, but the effect was great, as were the borrage leaves (not something we’ve come across very often in restaurants). 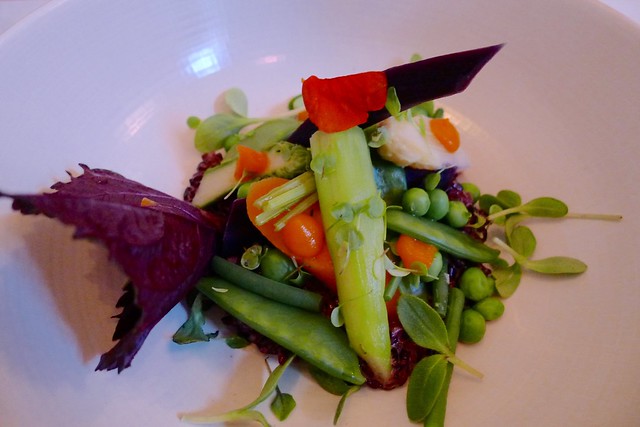 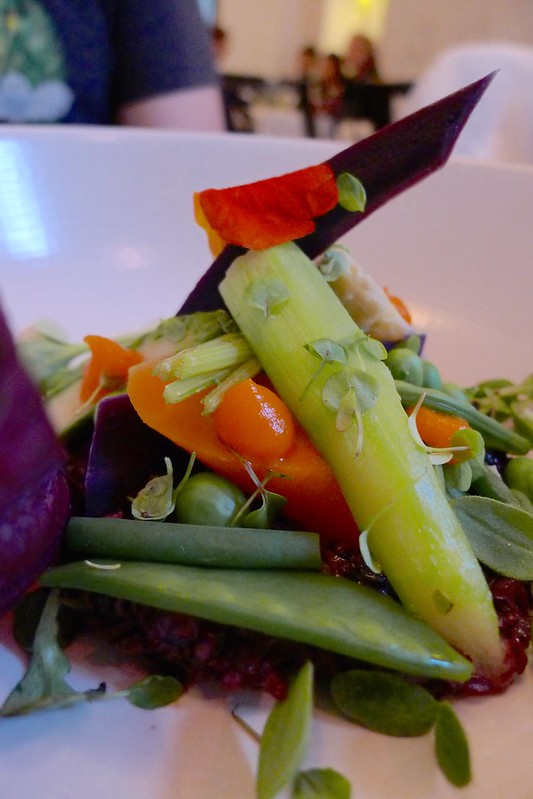 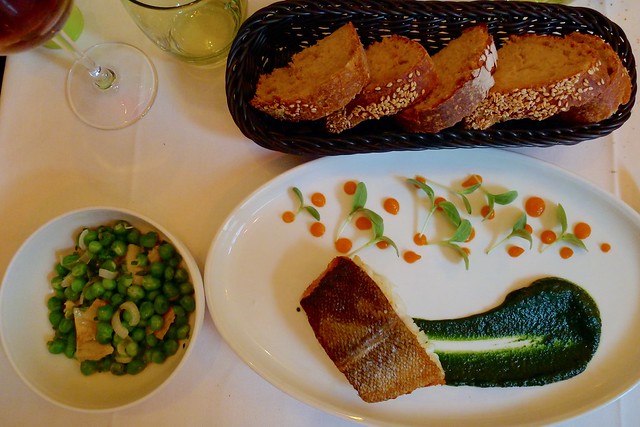 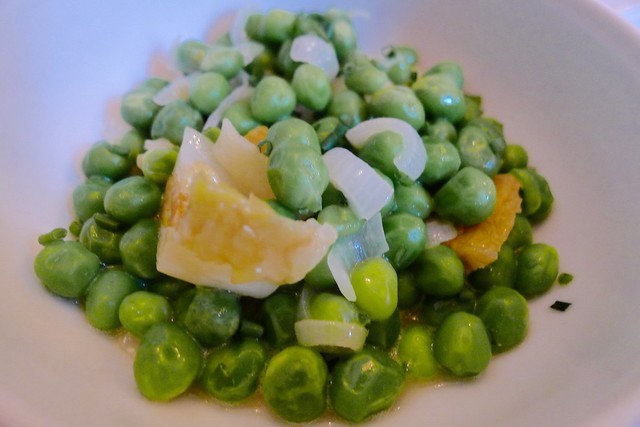 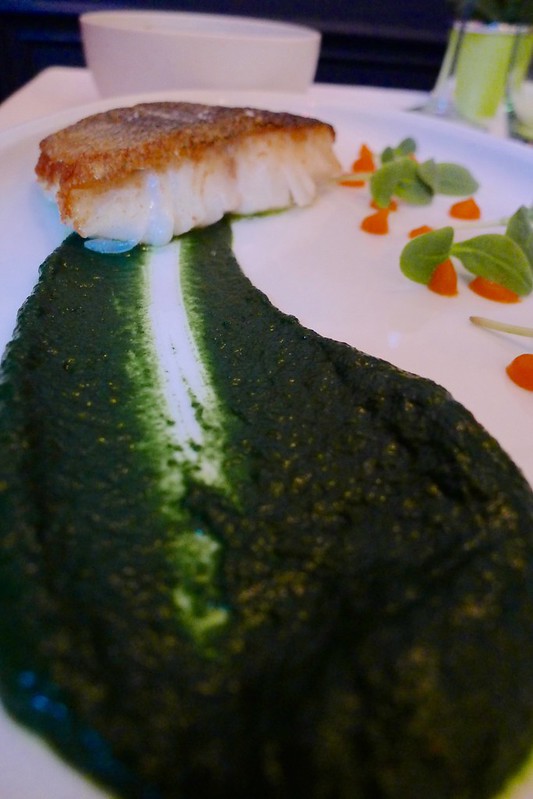 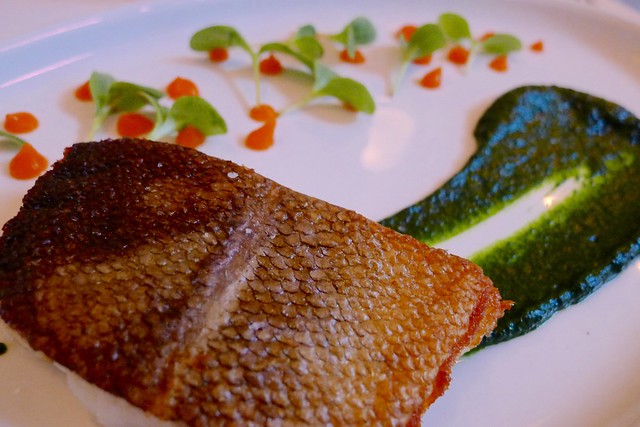 The dessert of the day (Brocciu / garriguette strawberry / espelette) was mysteriously marked as being a ‘pre-dessert’ (smaller than a real dessert?), but we took it as a standard one. It turned out to be one square of Corsican cheese topped with a strawberry jelly, accompanied by fresh, strong-smelling strawberries.Yummy and extremely colourful.

And although we are sometimes disappointed by chocolate / caramel desserts (often stodgy and/or over sweet), here it was perfect and spectacularly presented – the little saucer holding the caramel ice cream was actually the lid to a bowl, and once removed the chocolate dessert itself was revealed. Fun stuff! 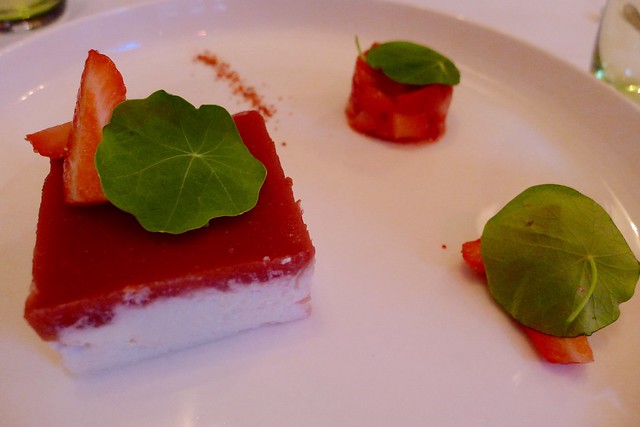 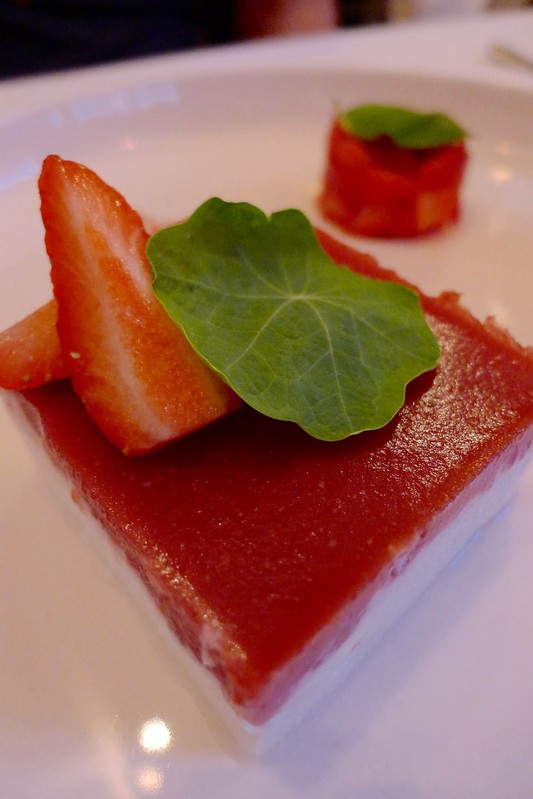 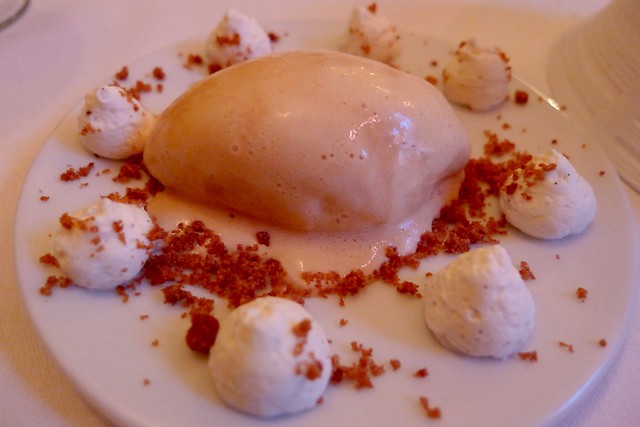 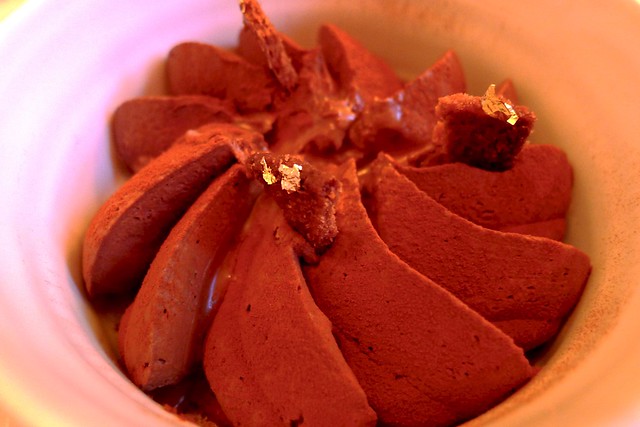 By the way, watch out if you ask for an espresso after the meal – it comes served with loads of lovely sweet nibbles, including a great marshmallow and a couple of chocolate options. We were more than full by this time! 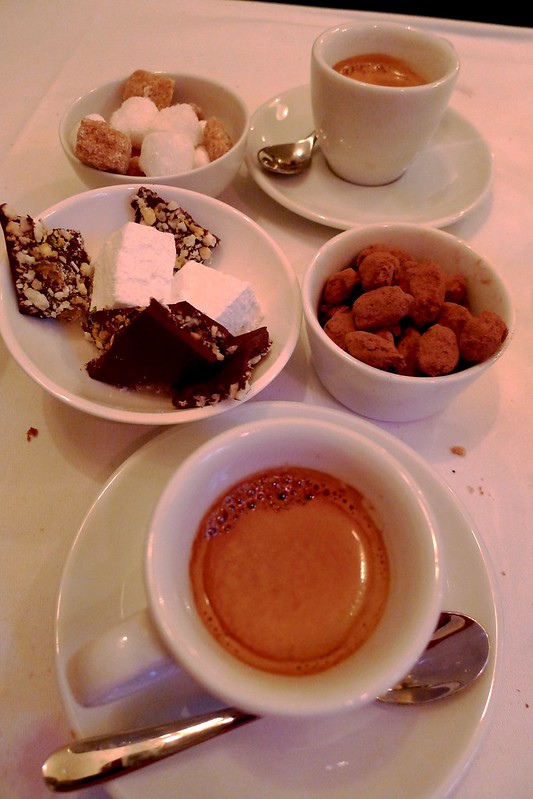 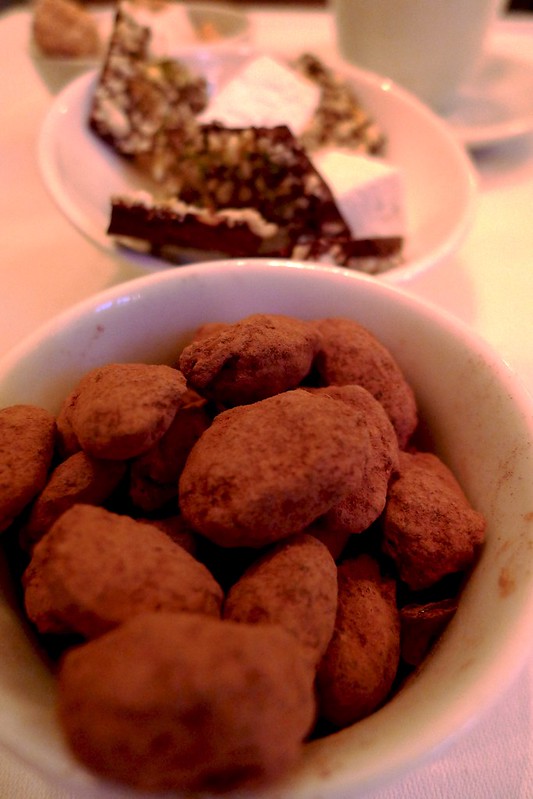 During the entire meal, the staff was attentive and efficient – no excessive waiting, but no forcing us to race through the meal either. The chef even came to our table for a quick laugh!

The evening was relaxed and friendly, perhaps a little noisy in the small dining room but bearably so. For surprising, impeccably presented, tasty food,  the AG won’t disappoint you, and – even better – it’s extremely close to us  (10 minutes on foot from the Hôtel Design Sorbonne and less than 15 minutes from the Hôtel Les Dames du Panthéon). 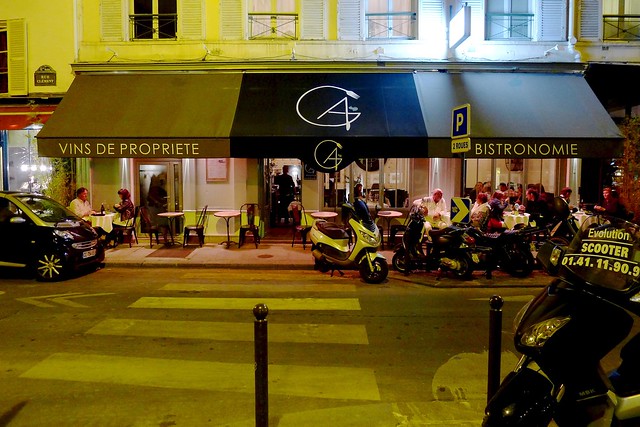