You might not be familiar with the name of Cyril Lignac, but with his thick accent (southern) and manly-but-short beard, he’s pretty much the French Jamie Oliver and Delia Smith rolled into one (albeit slightly younger than the former and half the age of the latter), with appearances on numerous TV shows (cooking and otherwise), TV ads, his own line of kitchenware, etc.

In the past few years, he’s also opened up several restaurants in Paris, the latest one being Aux Prés, in Saint-Germain-des-Prés just minutes from our hotels.

So we went down to see if TV chefs can get away with murder when they want to, or whether Monsieur Lignac’s reputation really is merited. Here’s our review.

In a recent, previous life, Aux Prés was almost certainly a very ordinary, rather dismal brasserie. Now though it has been given a makeover – deliberately dark and cosy, there are a few retro designer touches, a few kitsch items and some flowery wallpaper that they are obviously very fond of (it features on their business cards too).

You could almost believe you’re in Brussels, and it’s a space that’s probably better suited to winter nights than summer ones, especially as their air conditioning isn’t great at handling summer heat – the night we ate it was probably about 34°C in there, and everyone was suffering, including the staff.

Nevertheless, we like the interior design, and it seems to attract a slightly younger crowd than other places in the area. 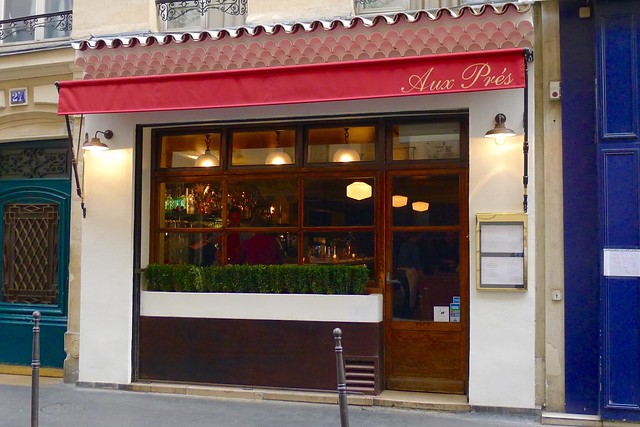 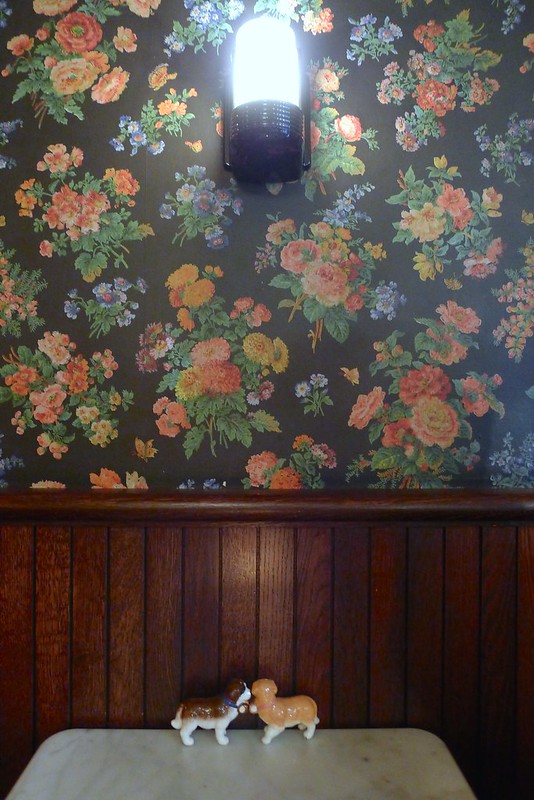 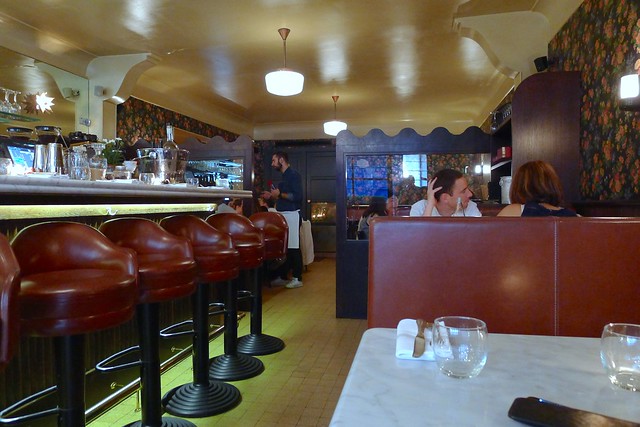 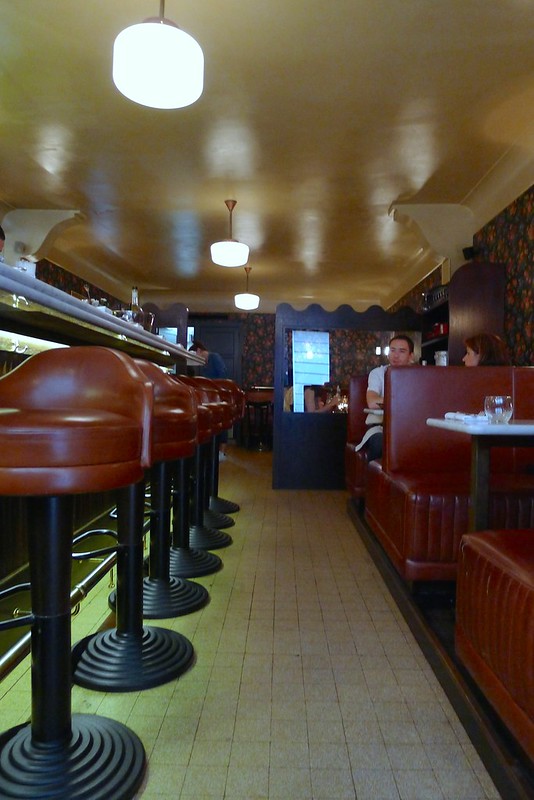 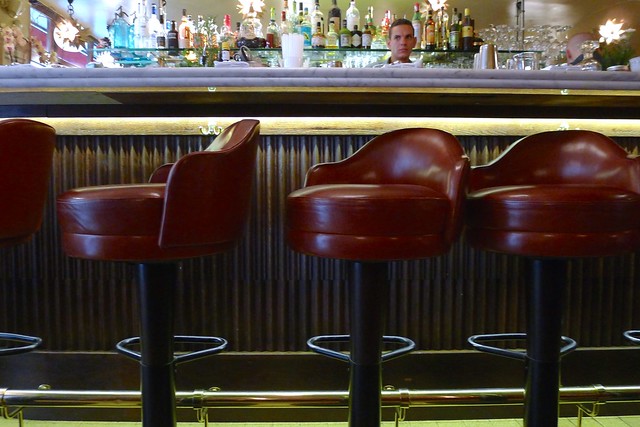 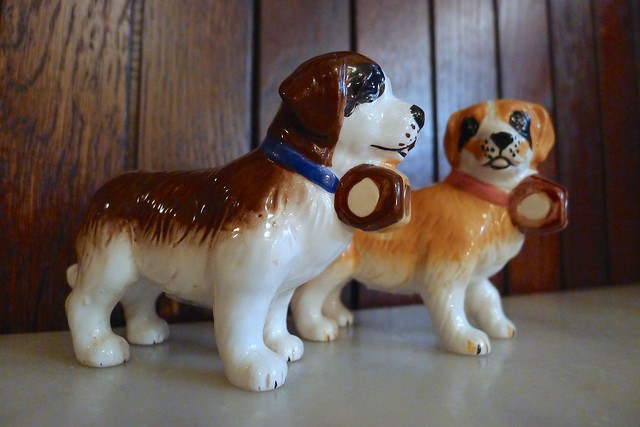 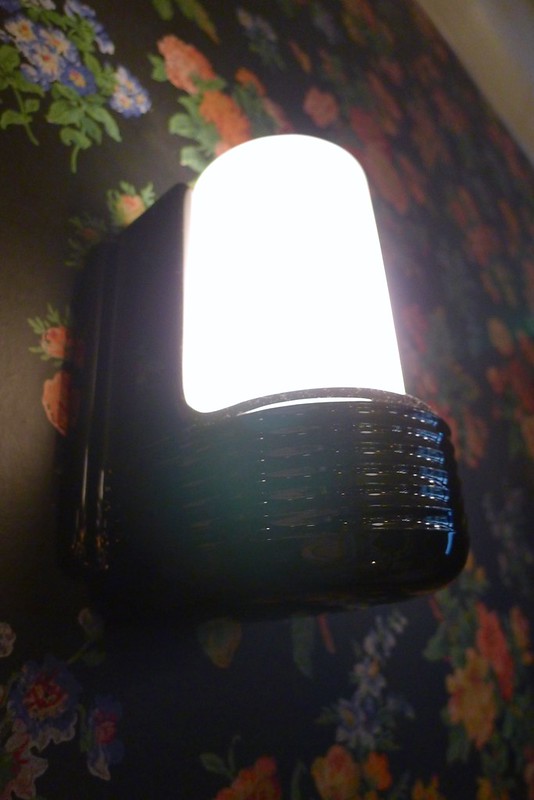 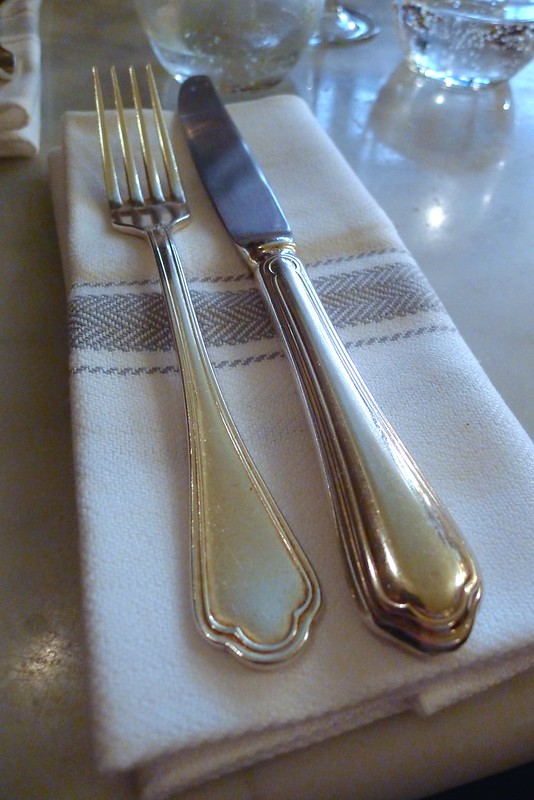 Sweating on our faux leather seats, we checked out the menu and decided to order a bottle of chilled white wine and some sparkling water as quickly as possible! 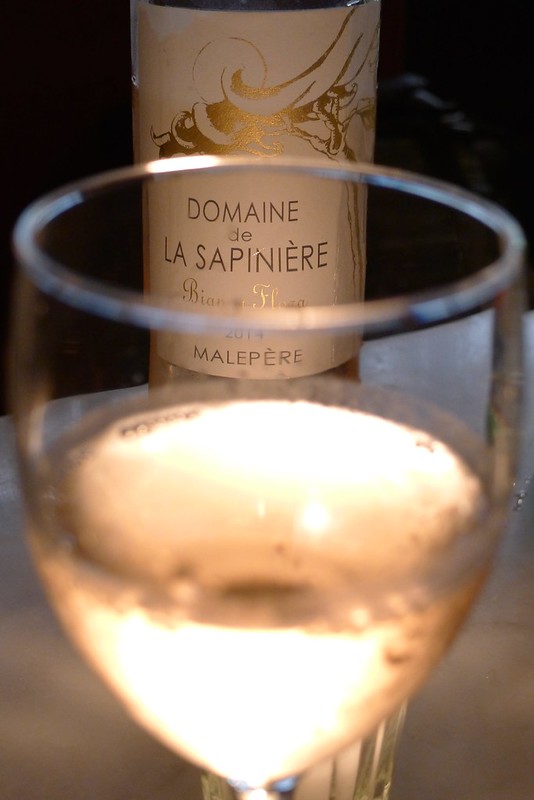 The restaurant has a couple of fixed price menus, two courses for 32€ (lunchtime only) or three courses for 45€. It’s neither excessive, nor the cheapest place in the area, and the name of the chef is probably part of the reason why.

We decided to start with “ginger-marinated tuna with Thai pepper pickles” which melted in the mouth and smelled delicious, a “(super creamy) burrata with (scrumptious) cherry tomatoes,  lemon confit and piquillo peppers”, served with pine nits that really added something to the overall taste, and “crunchy rice, tuna marinated in Sriracha, avocado”, a great surprise with its crunchy exterior and soft interior, although it didn’t pack the spicy punch we had been hoping for.

All the dishes were beautifully presented, with dark plates and little touches of greenery to set everything off. 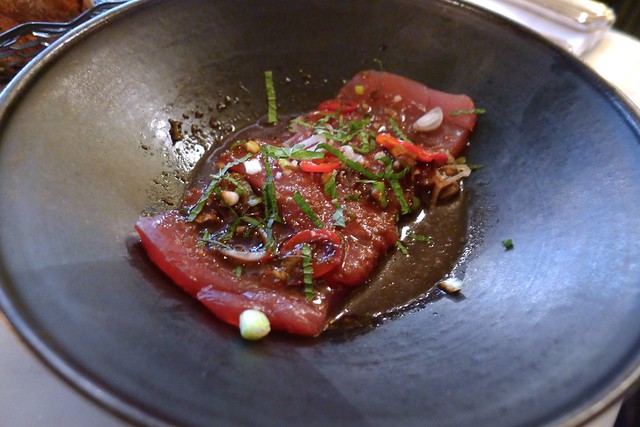 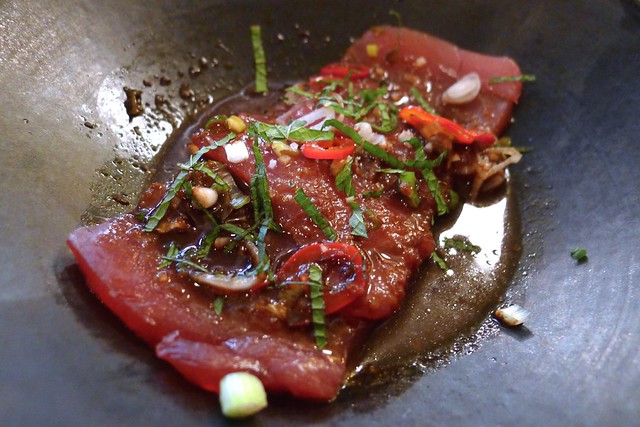 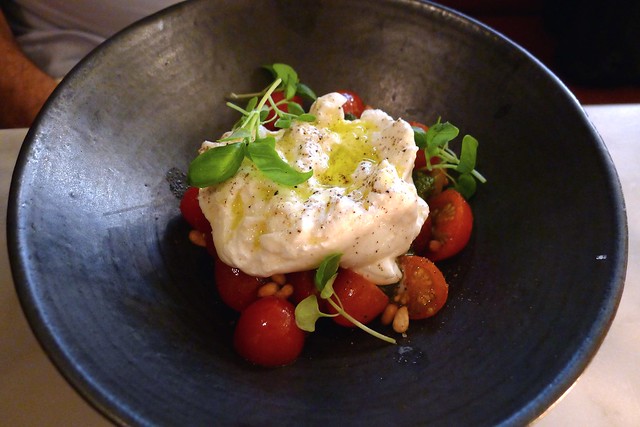 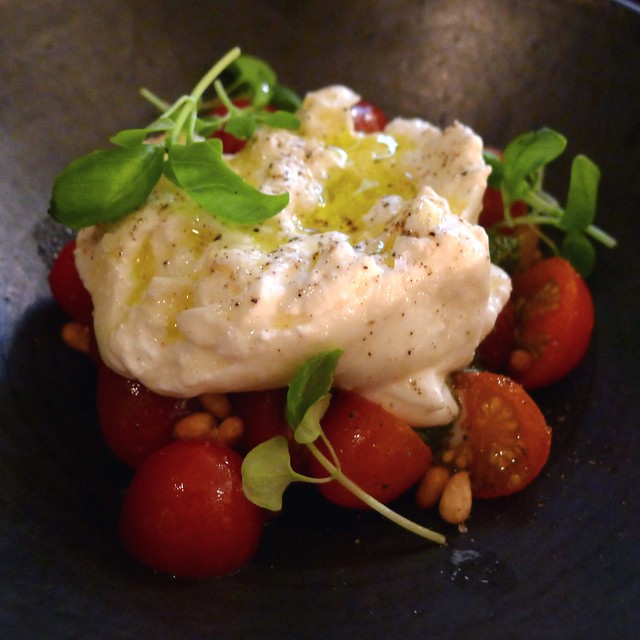 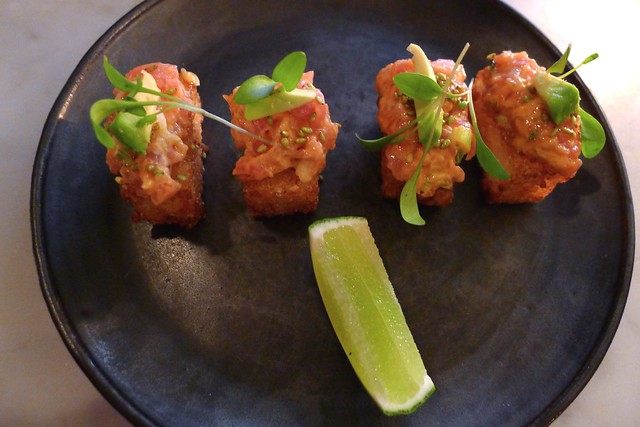 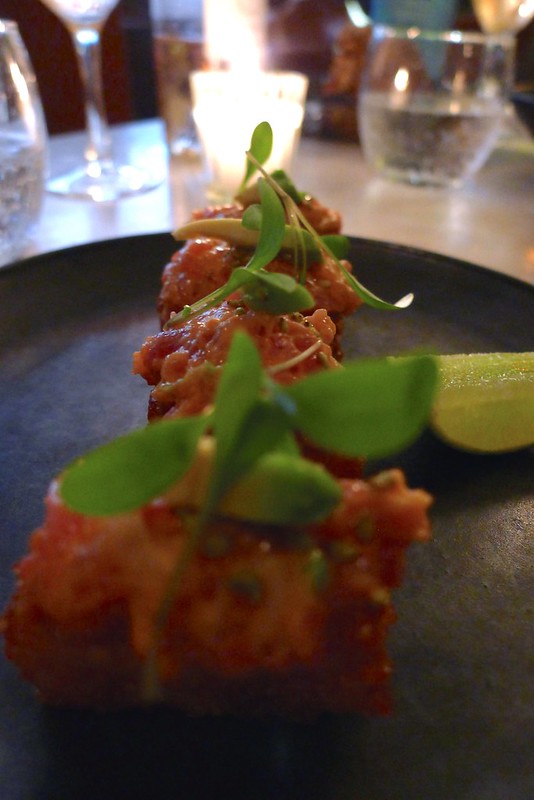 Our main dishes were served smartly, without making us feel rushed (makes a change from a certain restaurant we could mention).

One was actually a starter (soft-boiled organic egg, chanterelle mushrooms with hazelnuts, sweet onion) but still quite filling and a great mixture of super-soft textures. The grilled organic salmon, served with chanterelle mushrooms (obviously a chef favourite), edamame beans and fried croutons was bursting with colour and taste, and perfectly cooked.

Finally, just to shake things up a bit, we also asked for a vegetarian dish (not on the menu), suspecting – as is often the case – that it would annoy the chef, or be lacklustre, or both. In fact, it turned out to be a great surprise, very generously served with super-fresh vegetables (carrots, onions, peas…) dripping with delicious butter and accompanied by… chanterelle mushrooms! 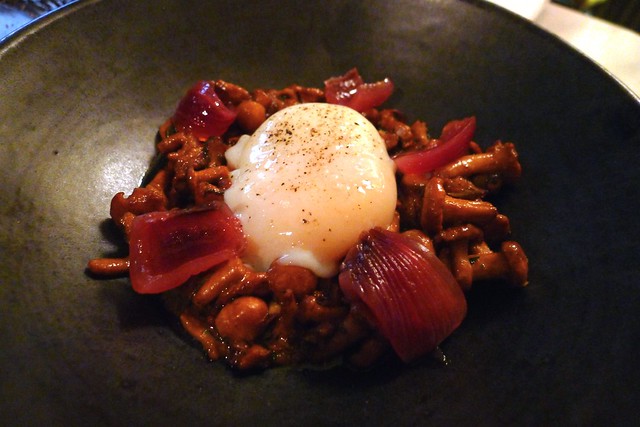 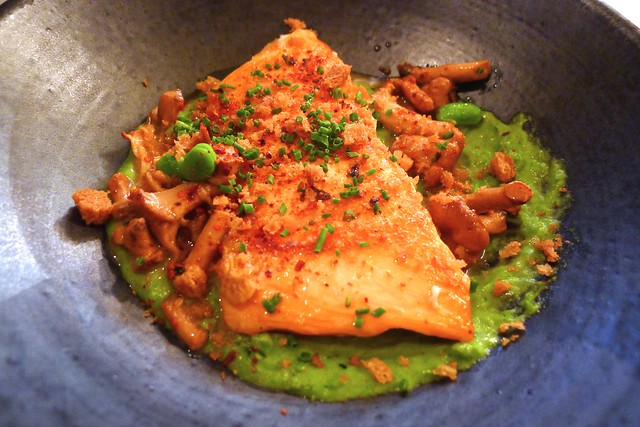 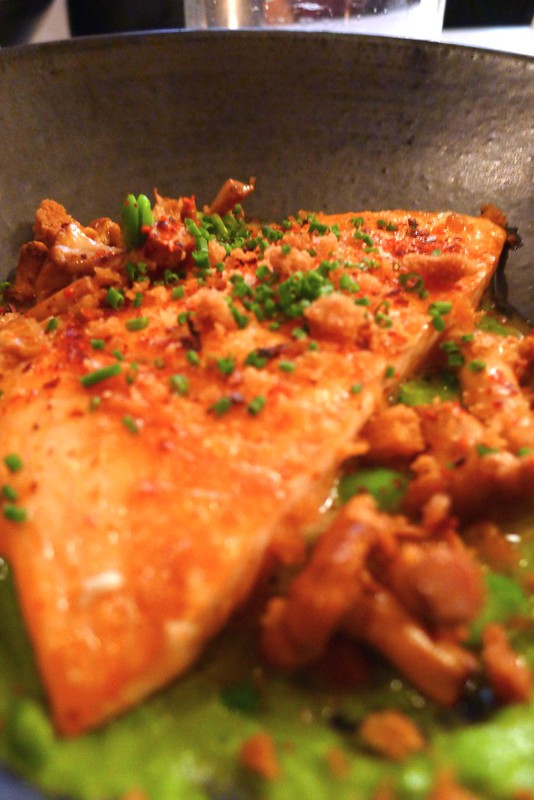 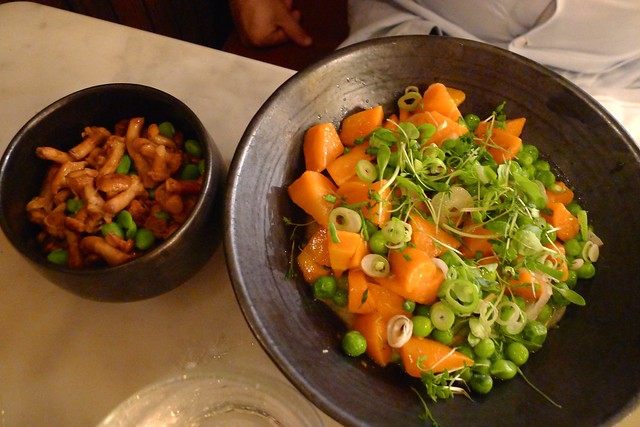 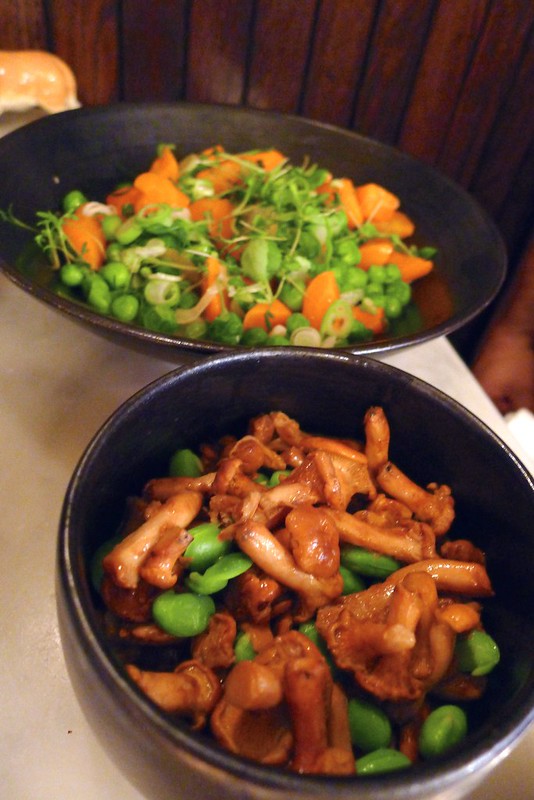 Unfortunately, dessert wasn’t quite as amazing.

The rum baba and its whipped cream were a little bland (although leaving us with the bottle of rum helped raise our spirits a little), the raspberry French toast with pistachio ice cream was similarly OK-ish (but nothing more) and the sundae with Tahiti vailla, cookie pieces and chocolate sauce failed to leave a great impression.

Perhaps by this time we were so hot that we were unable to appreciate the food? 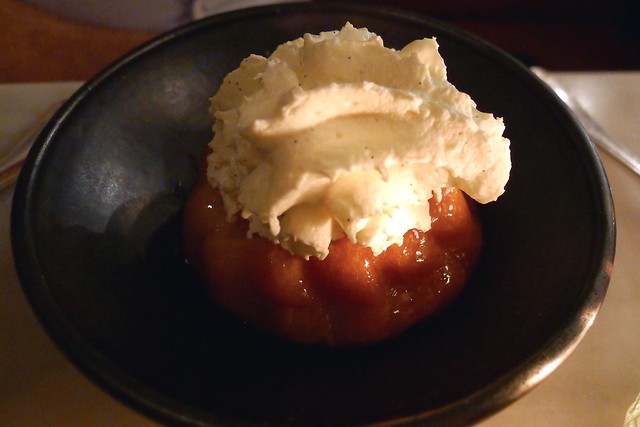 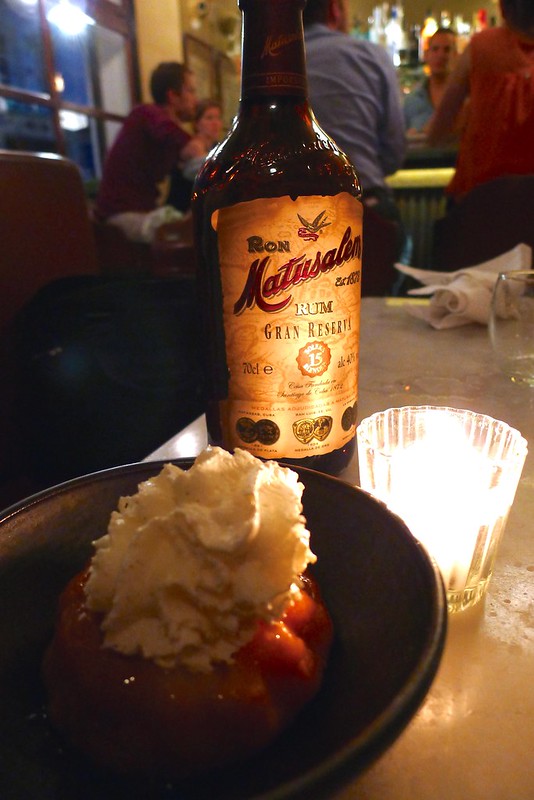 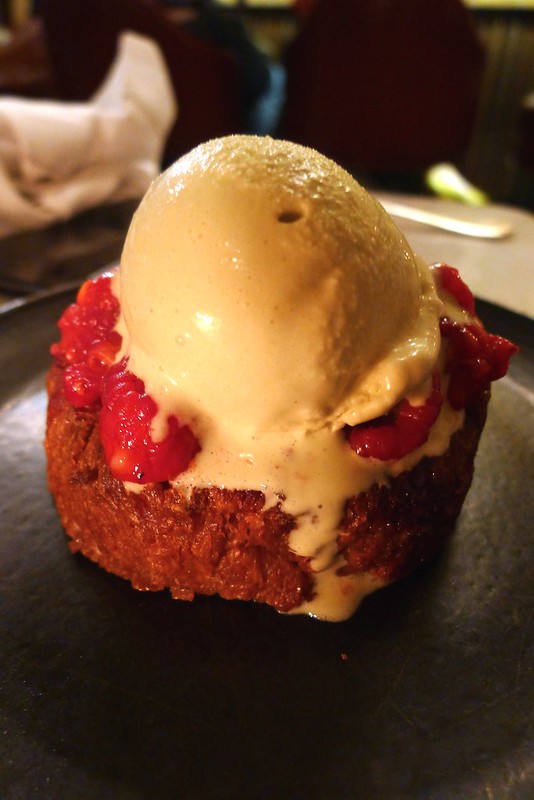 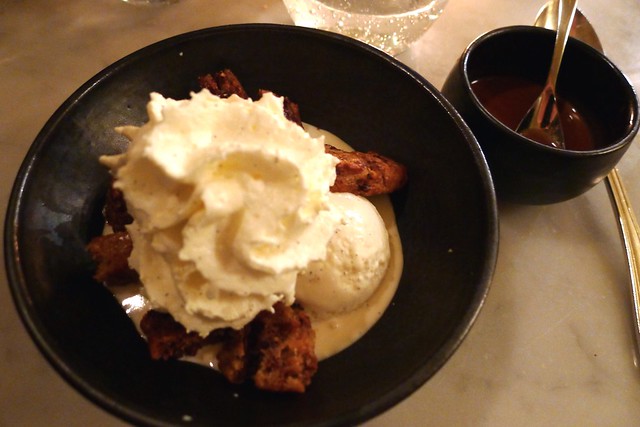 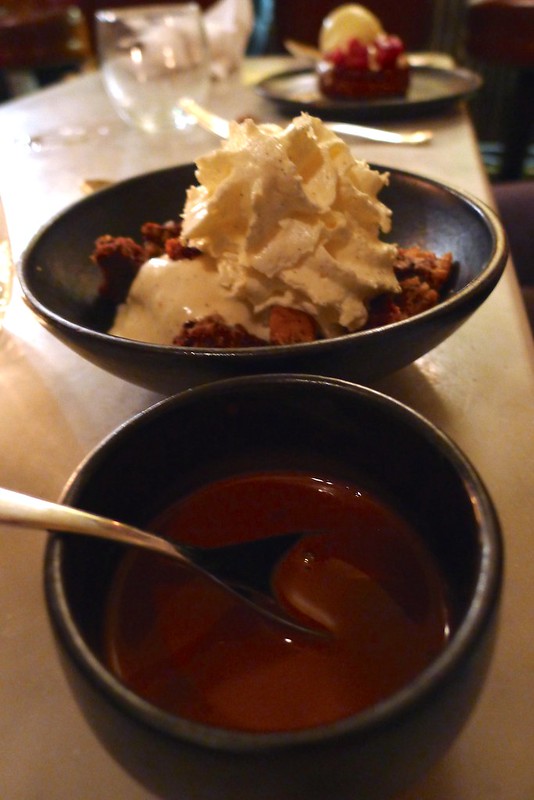 One nice touch at the end of the meal however was coffee with a home-baked madeleine cake, served directly from the baking tray. Delicious! 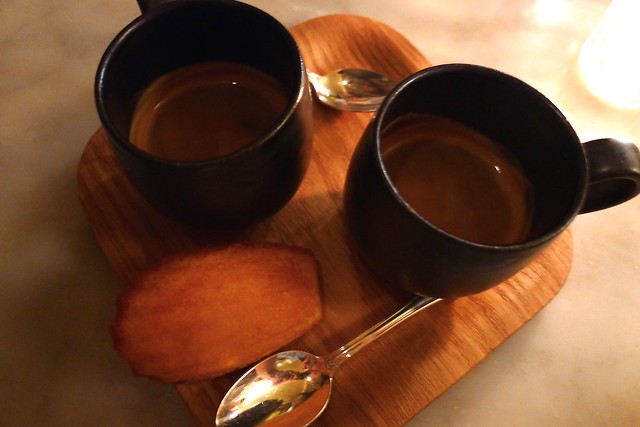 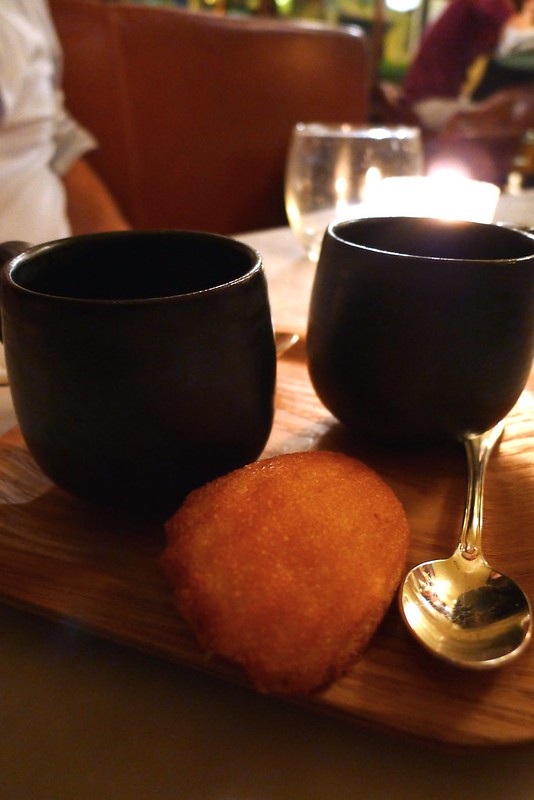 We enjoyed the feel and (most of the) food at Aux Prés. The staff are cool, the interior design is interesting, and the dishes are very obviously created with fresh produce and a lot of care.

With better desserts and decent air conditioning, it would all have been perfect! A visit during the winter months is definitely in order.

To check out all our photos of Aux Prés, simply click here. 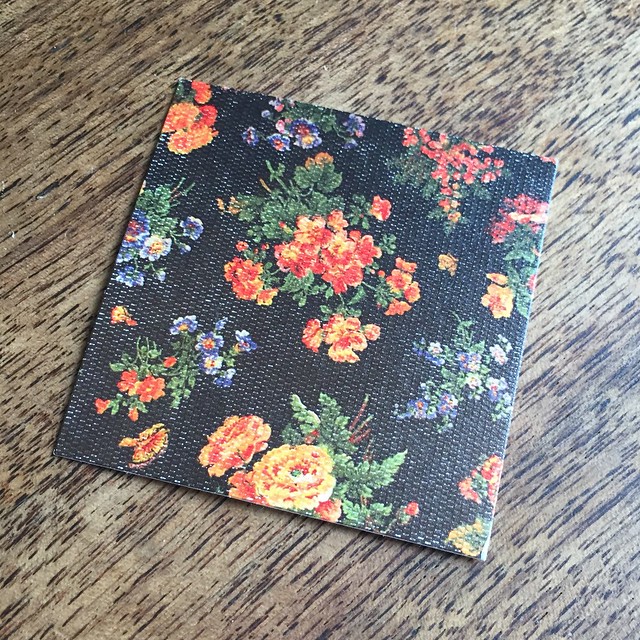 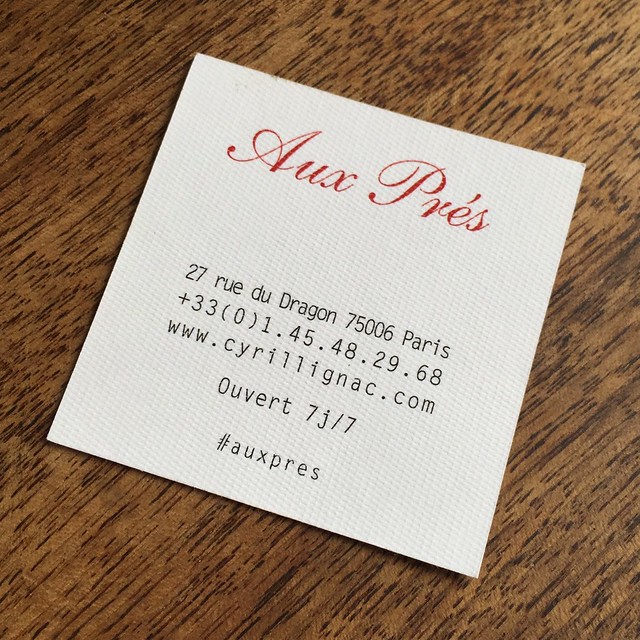