Ask anyone to name an iconic element of French cuisine, and a lot of people will say either onion soup, snails or frogs legs. Not far from our hotels, Roger La Grenouille is specialised in the latter (as you may have gathered from their name).

Now an institution on the Left Bank, their ultra-kitsch interior design featuring hundreds of frogs has just had a makeover, and we went down to see if the food had been given a 21st century update too.

With two main dining areas, one of which overlooks a small, typically Parisian planted courtyard, Roger La Grenouille has committed to its theme 200% – there are frogs on the walls, frogs as statues and of course frogs legs available everywhere on the menu.

If you think the space looks a bit busy now, you should have seen it last year when there were dozens of copper pots hanging from the ceiling and everything was brown, beige or nicotine yellow… 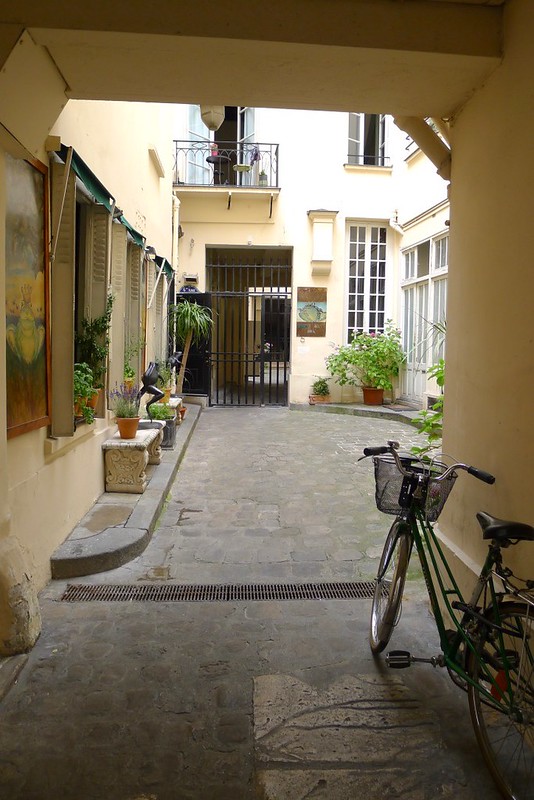 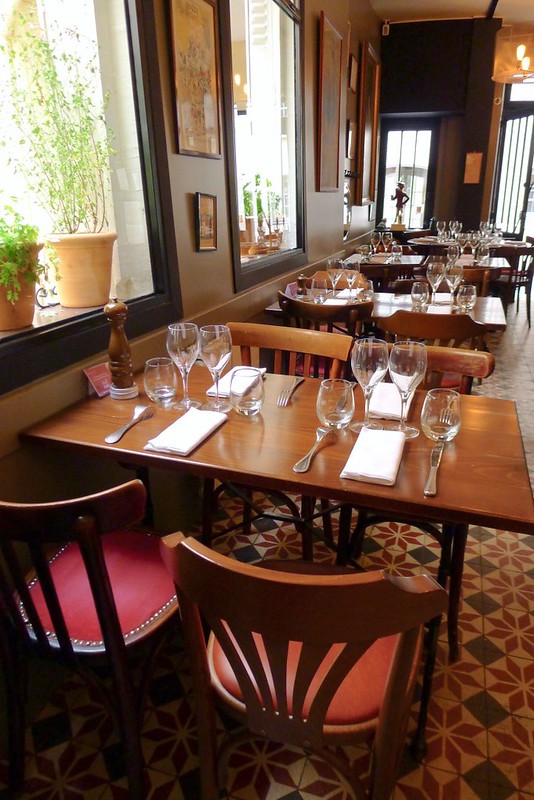 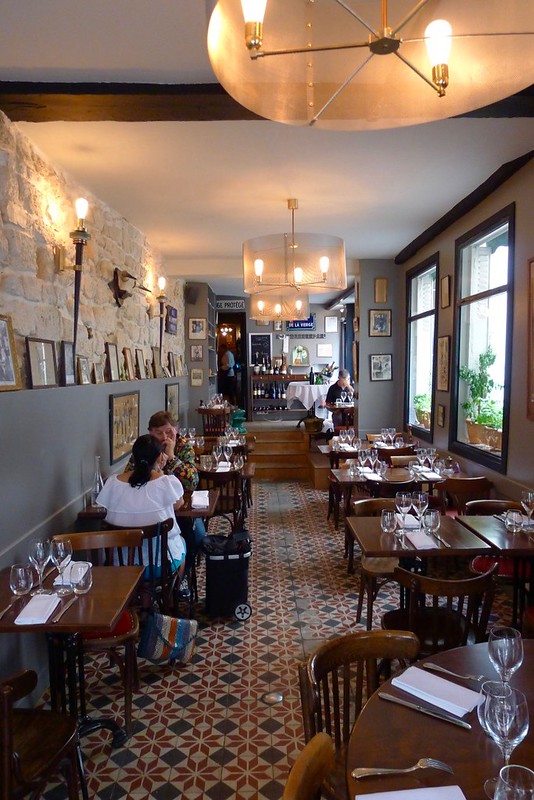 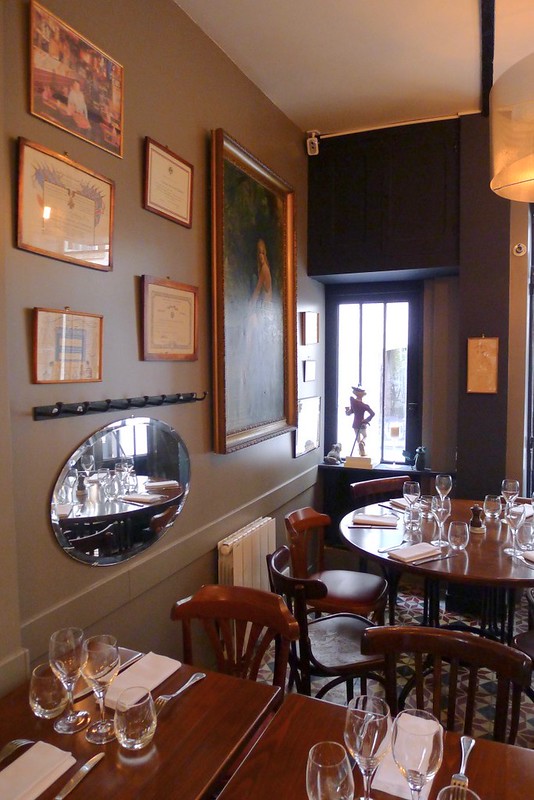 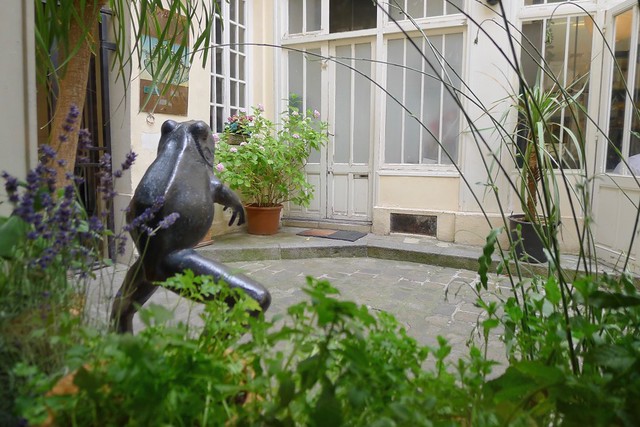 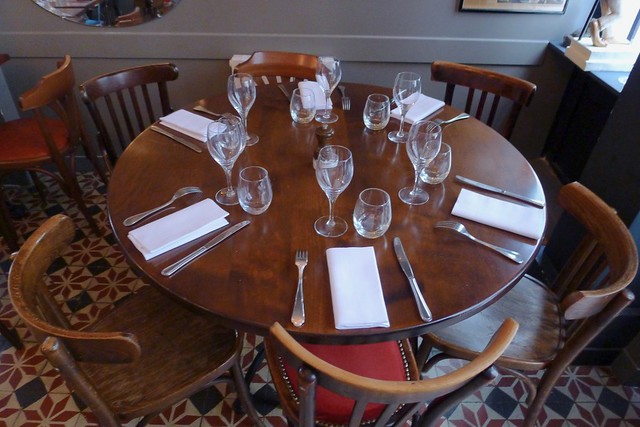 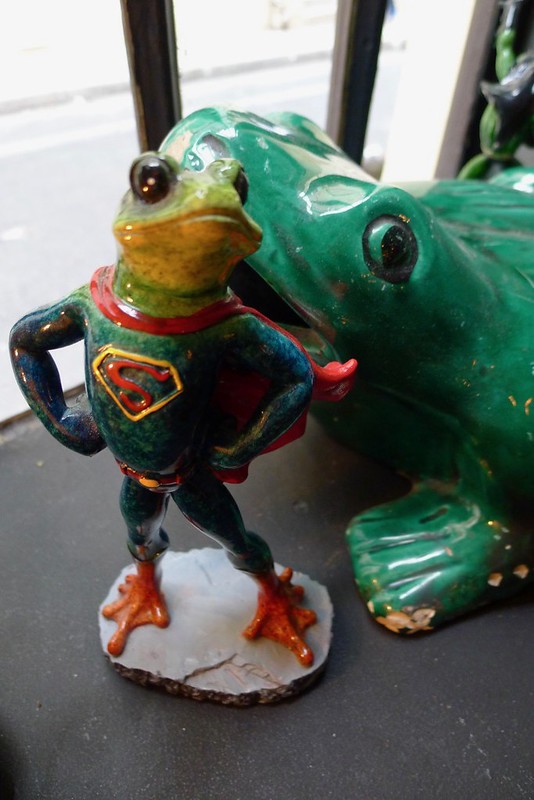 The new look has only been applied to the front dining area – take a look at the room in the back (which doesn’t have any windows) and you’ll get an idea of how much the redo was needed. No-one looks good under this lighting… 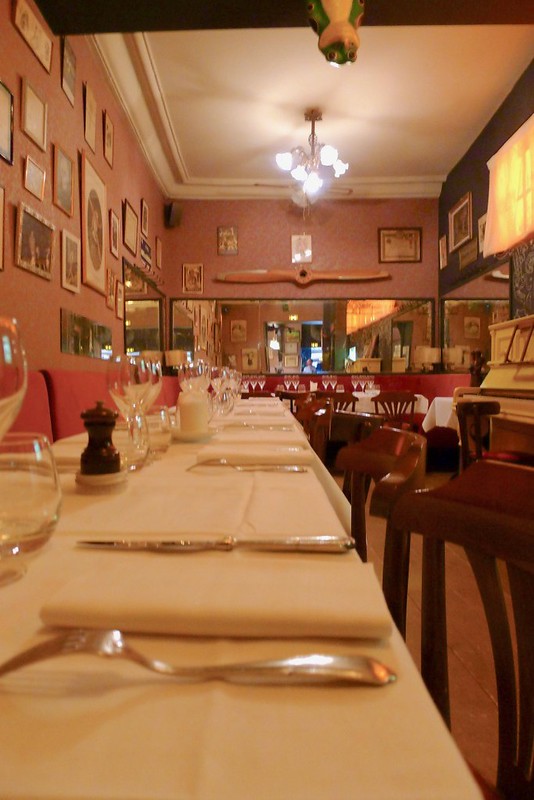 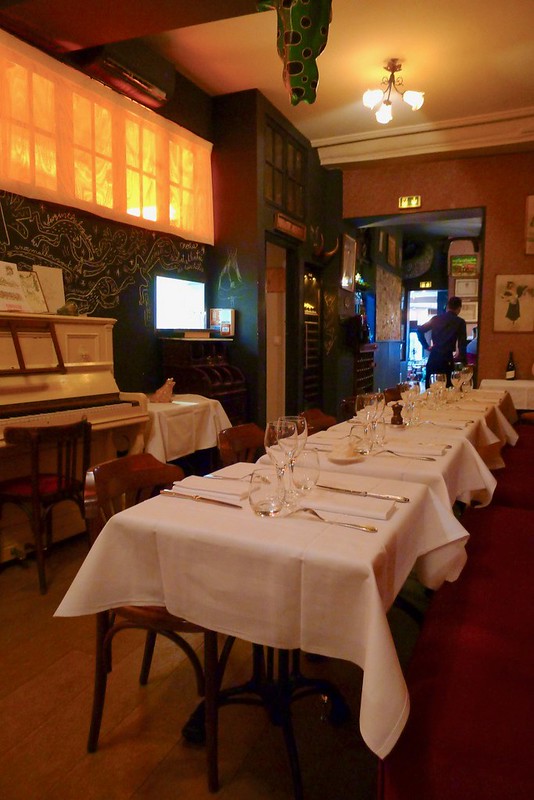 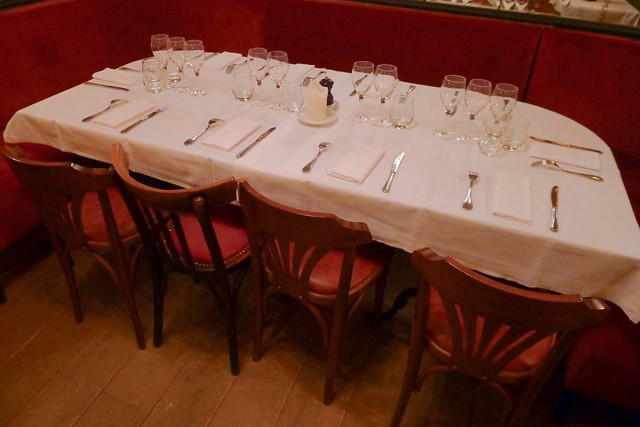 OK, so R-la-G is a tourist fave, be we wanted to check out for ourselves whether the (mainly positive) reviews were justified.

First of all, even after arriving late for our reservation, and finding the place empty apart from one table, the welceom was extremely cordial. Although the waiter couldn’t tell us much about the new look (it was only his second day) the boss came over to our table and we had a very agreeable chat before looking at the menu and ordering our wine.

To start, we chose an iced courgette soup with sesame seeds and a scoop of fresh goat’s cheese, and frog ravioli with a garlic sauce.

The soup was obviously fresh, with a good granular consistency, and was served with toast, hazelnut oil and shallots. Perfect for a hot summer’s day.

The ravioli were tender and perfectly cooked with just enough bite to them. The garlic sauce tended to overcome that of the frog’s legs, but as a whole it was a success.

The only thing that we were less enthusiastic about was the price of everything – 11€ for cold soup and 16€ for ravioli and (we would learn later) 30-odd euros for just 50cl of red wine in a carafe! That’s a little steep. Perhaps visitors to our beautiful city don’t mind paying so much, but we were a little surprised to have burned through 60€ before getting to the main course… 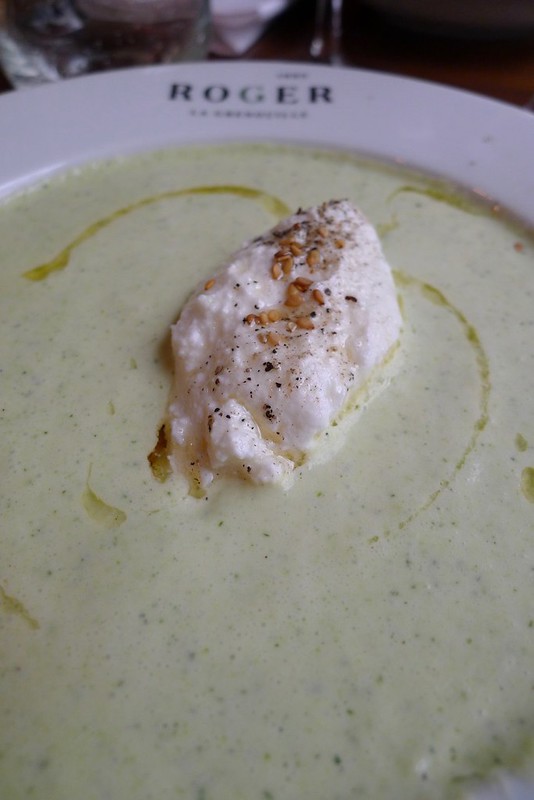 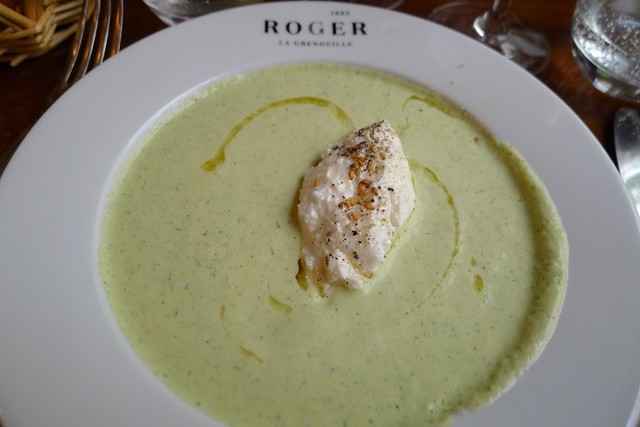 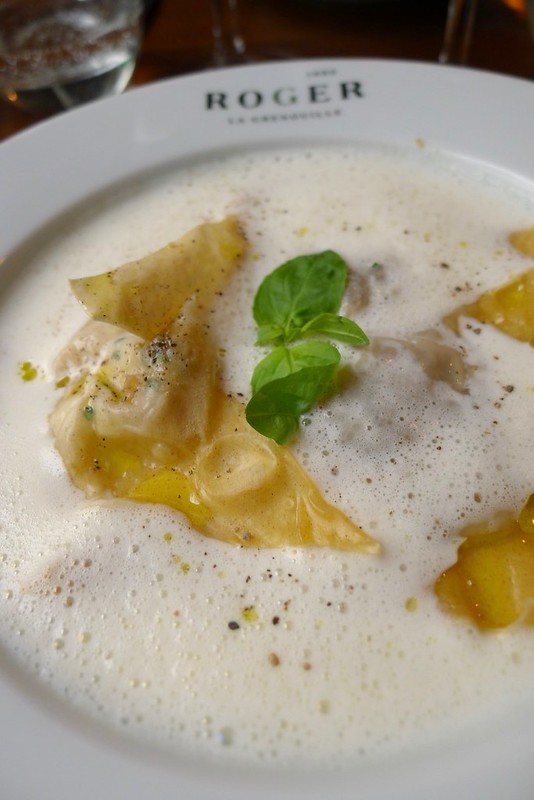 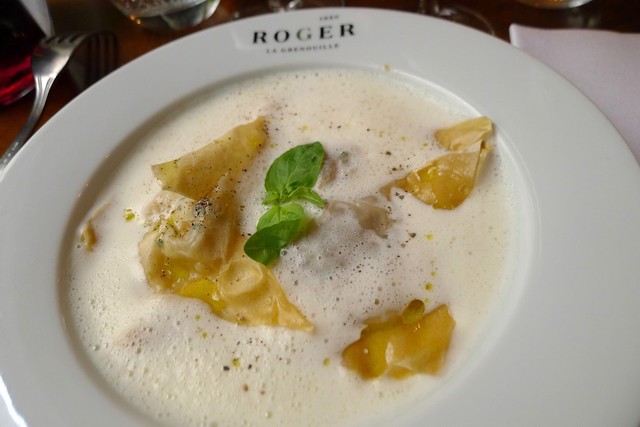 Next, we opted for a seasonal salad with raw & grilled vegetables and stracciatella (the best part of a burrata, apparently), and a “Greenwich” – a frog burger with french fries and tartare sauce.

The salad was generously served and well seasoned with a good variety of different tasted. We also appreciated that it was priced at just 17€.😜

We were slightly surprised that the frog burger seemed to have been deep fried (most definitely not your everyday burger) and served with fried onions on it, you might think the whole thing was a little hard to digest. However, the two served together worked very well, and the texture of the frogs legs was very much present.

Good luck finishing off that mountain of french fries though! 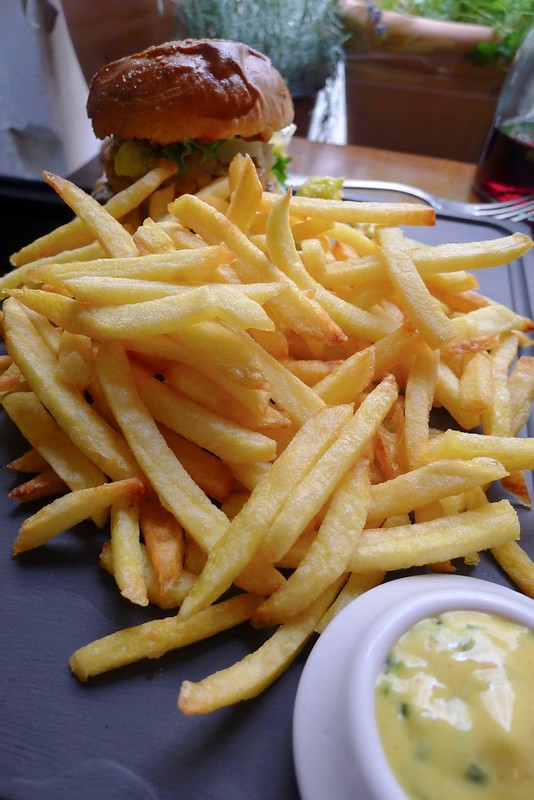 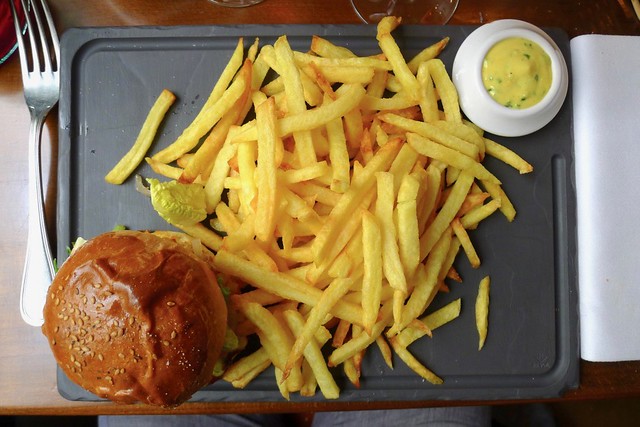 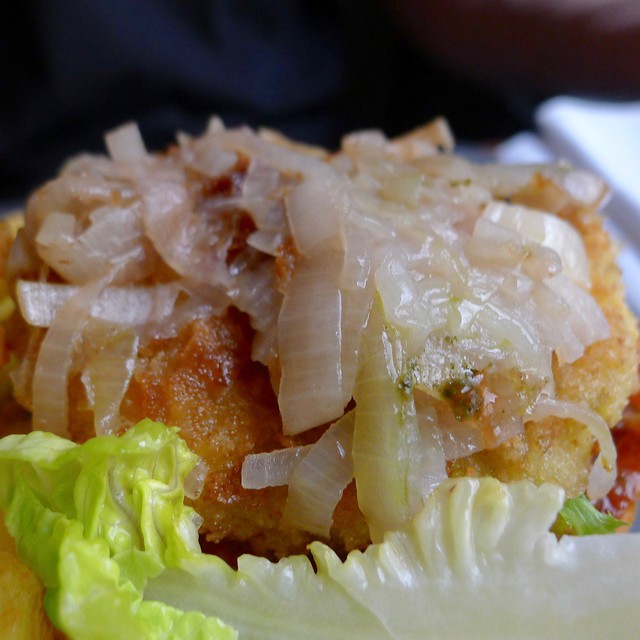 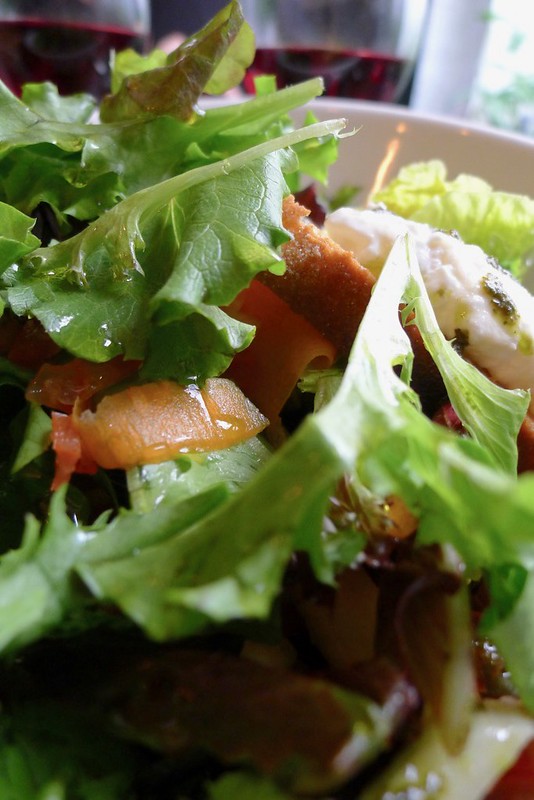 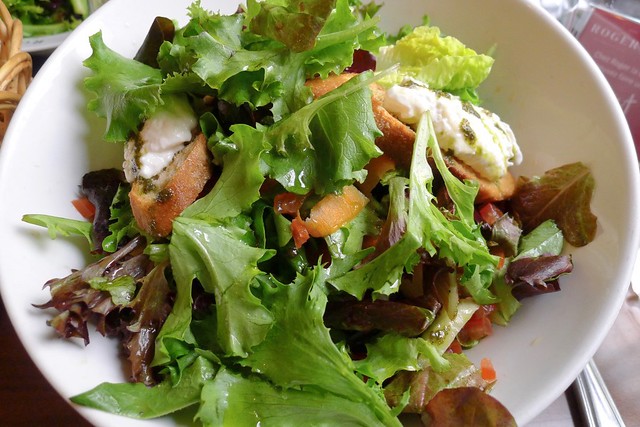 And now time for dessert!

The crumble-style lemon tart was suitably sugary with a strong citrus taste, and came interestingly presented in a glass.

As for the verbena-poached peach with a sablé breton biscuit base and yoghurt ice cream, we found the taste to be perhaps a little too subtle (although perhaps this was a choice made by the chef).

The desserts didn’t disappoint, but once again the price was a little harder to swallow – 11€ is a little dear for a bistrot, even one of this quality. 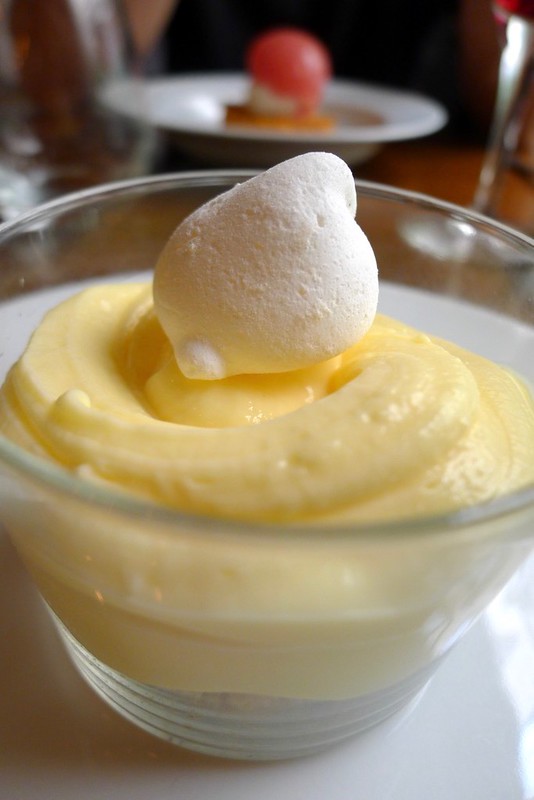 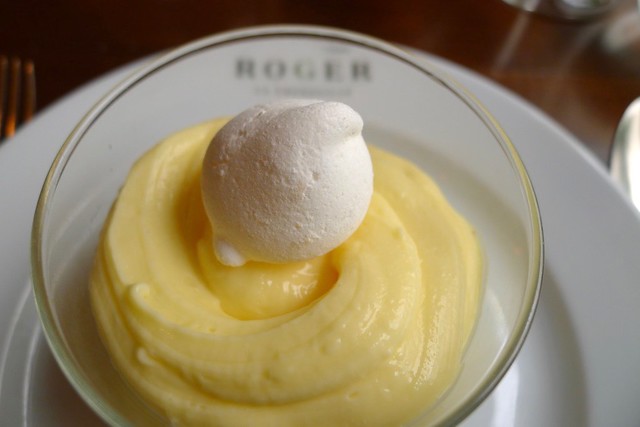 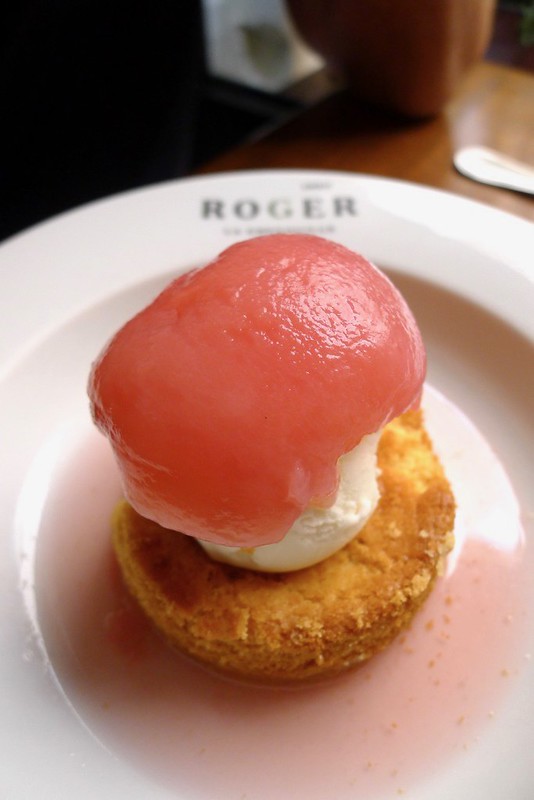 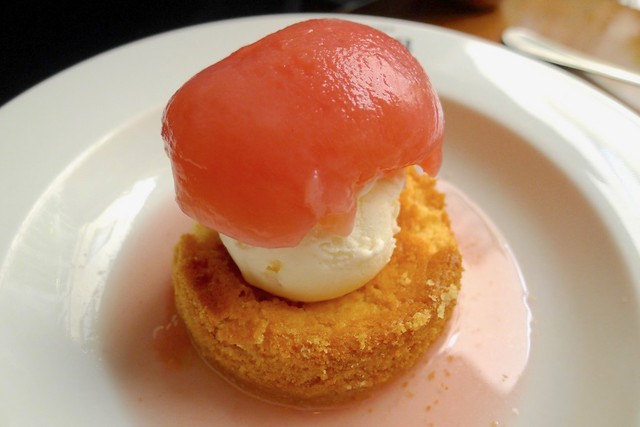 Roger la Grenouille insists on the quality of its ingredients, listing almost all their suppliers by name (some of which we also use for our hotels). It’s an admirable gesture, but this alone cannot explain why the prices are a tad higher than they should be.

That said, the restaurant will afford you a night of good food with a Frenchy twist, and the decor will certainly make you laugh (or cry if you’re stuck in the back room).

It’s also not far from our hotels, making it even more attractive! Perhaps it’s time to find out whether you like frogs legs as much as you think you do? 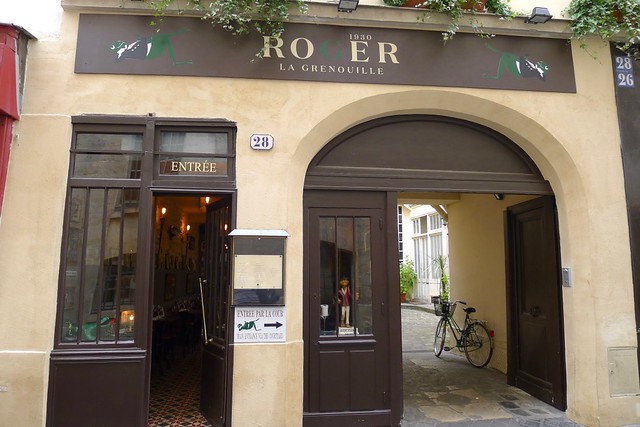 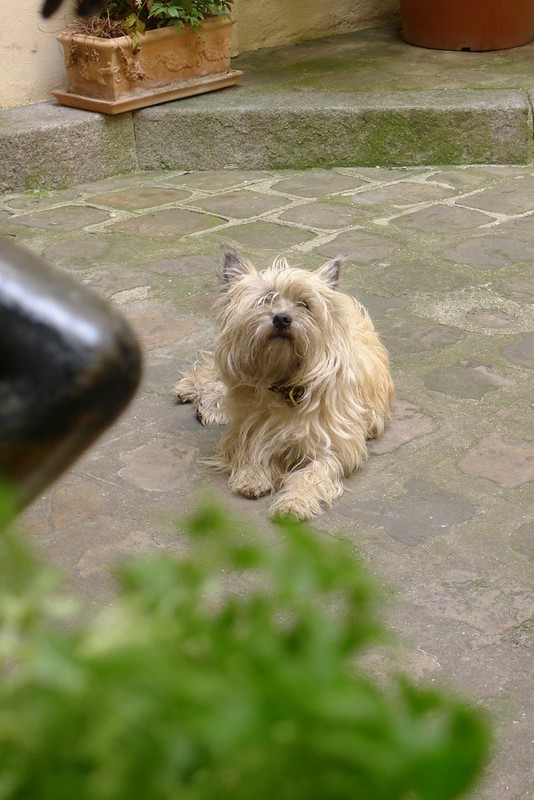