EP7 – named after the plot of land it’s built on – is in a completely new area of Paris near the BNF (our National Library), constructed over the railway lines of gare d’Austerlitz.

Two years ago, this part of town simply didn’t exist, but now there are shops, apartments, offices and… this digitally-orientated space that includes a bar, club and terrace on the ground floor, a smoking area on the first floor and a high-concept restaurant on the second floor.

We went down to this resolutely modern place just two weeks after they had opened, and its future seems very promising…

A new venue in a very new area… EP7 is dynamic, digital and daring.

Of course, it’s more than just a restaurant – here you can dance, drink a cocktail or a beer, smoke (unfortunately) and eat, as well as take part in their yoga sessions on Sundays and appreciate the visuals on the façade’s giant screens, showing info about the are in the morning, artistic pieces in the afternoon, info about current events in the evening (like International Women’s Day the evening we were there) or simply show live what the DJs inside are up to.

The building – designed by agency Randja – is elegant in a modern way, giving interesting views from upstairs both day and nigh. It’s pretty difficult to believe you’re still in Paris… 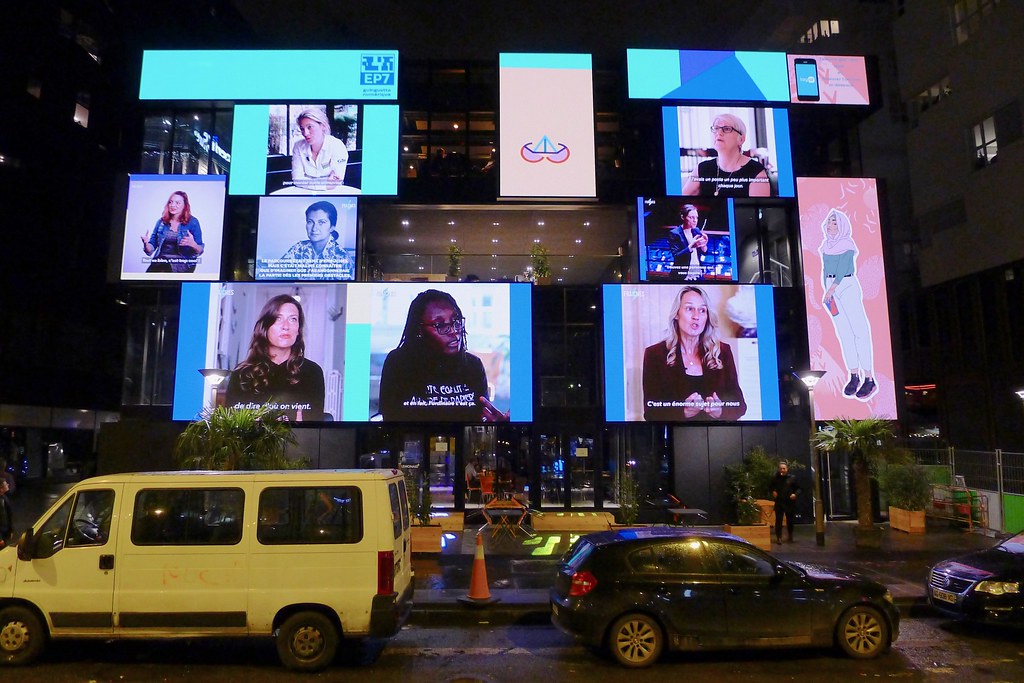 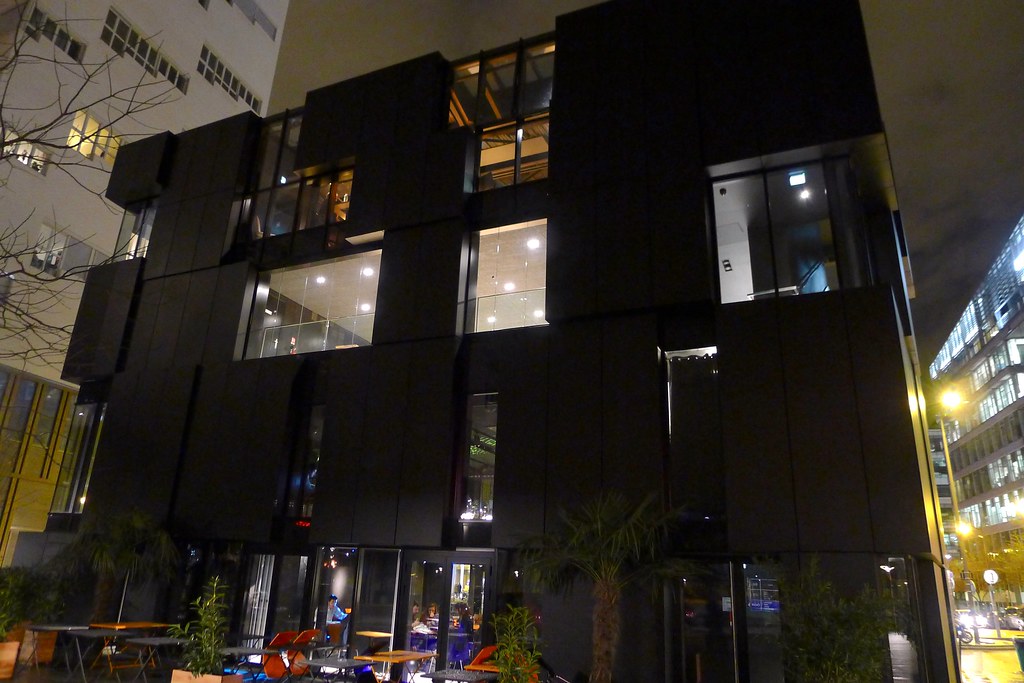 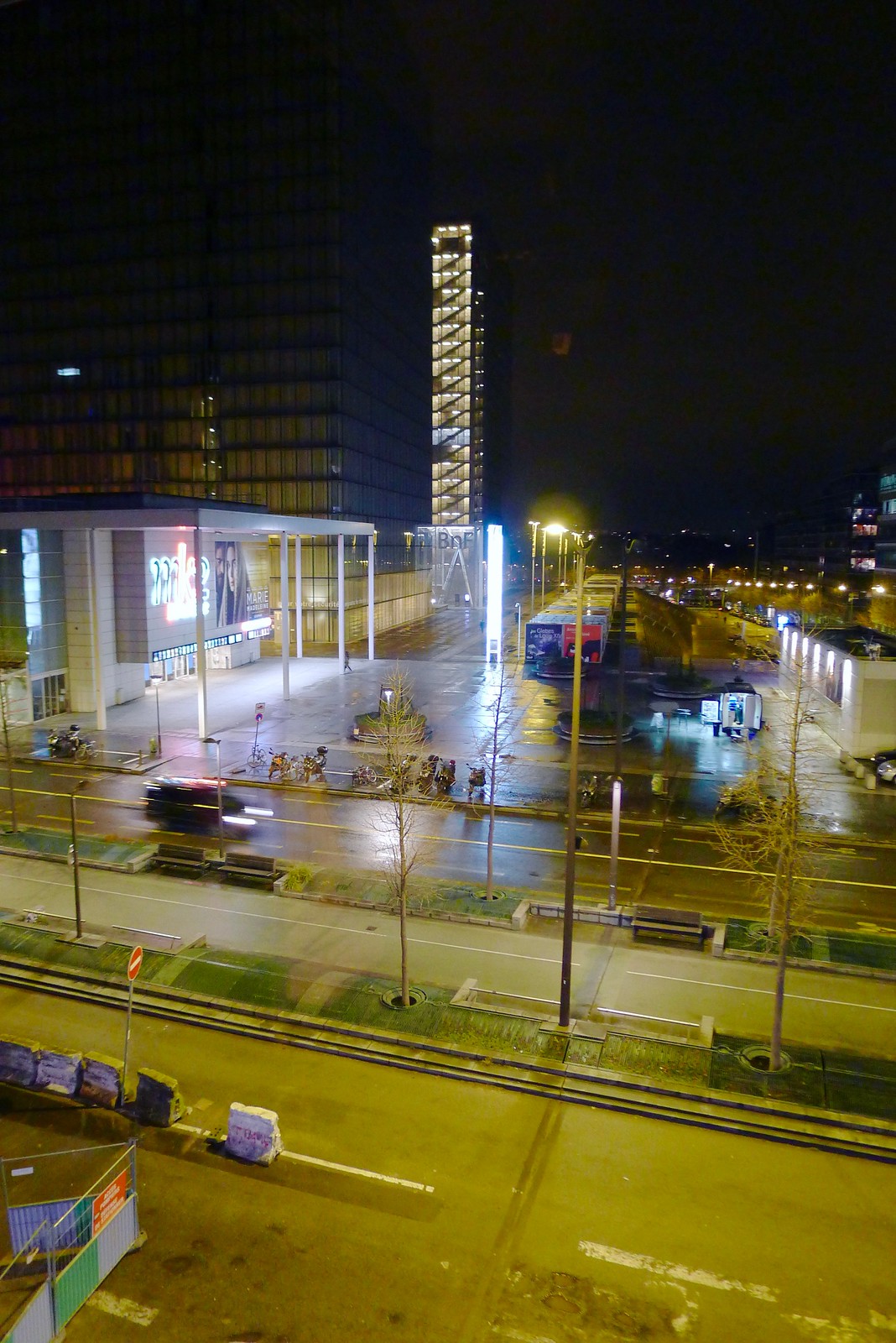 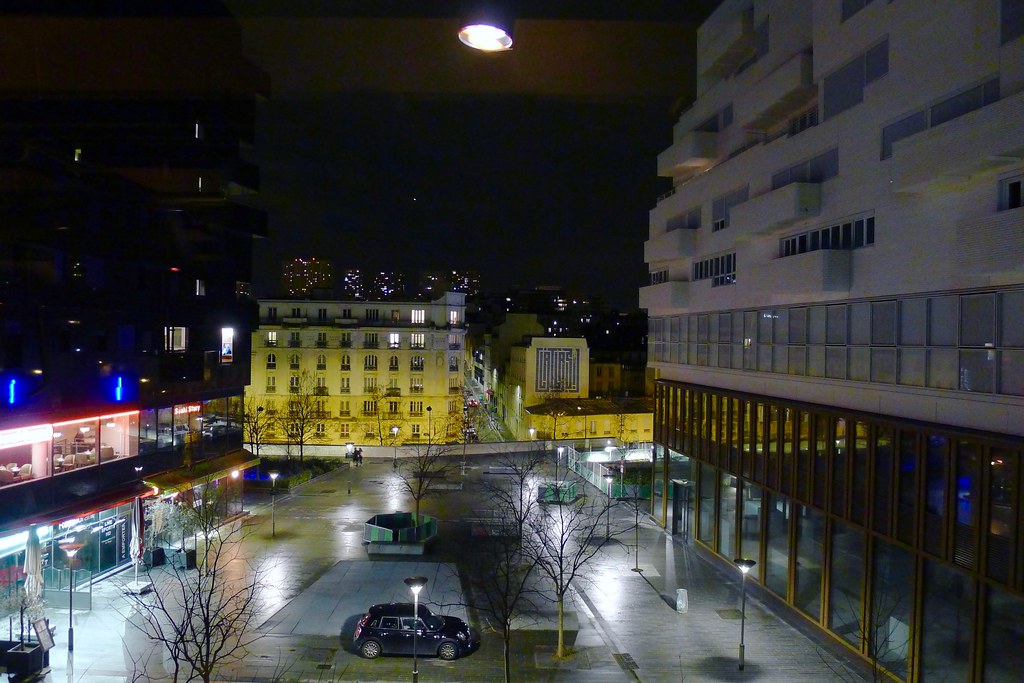 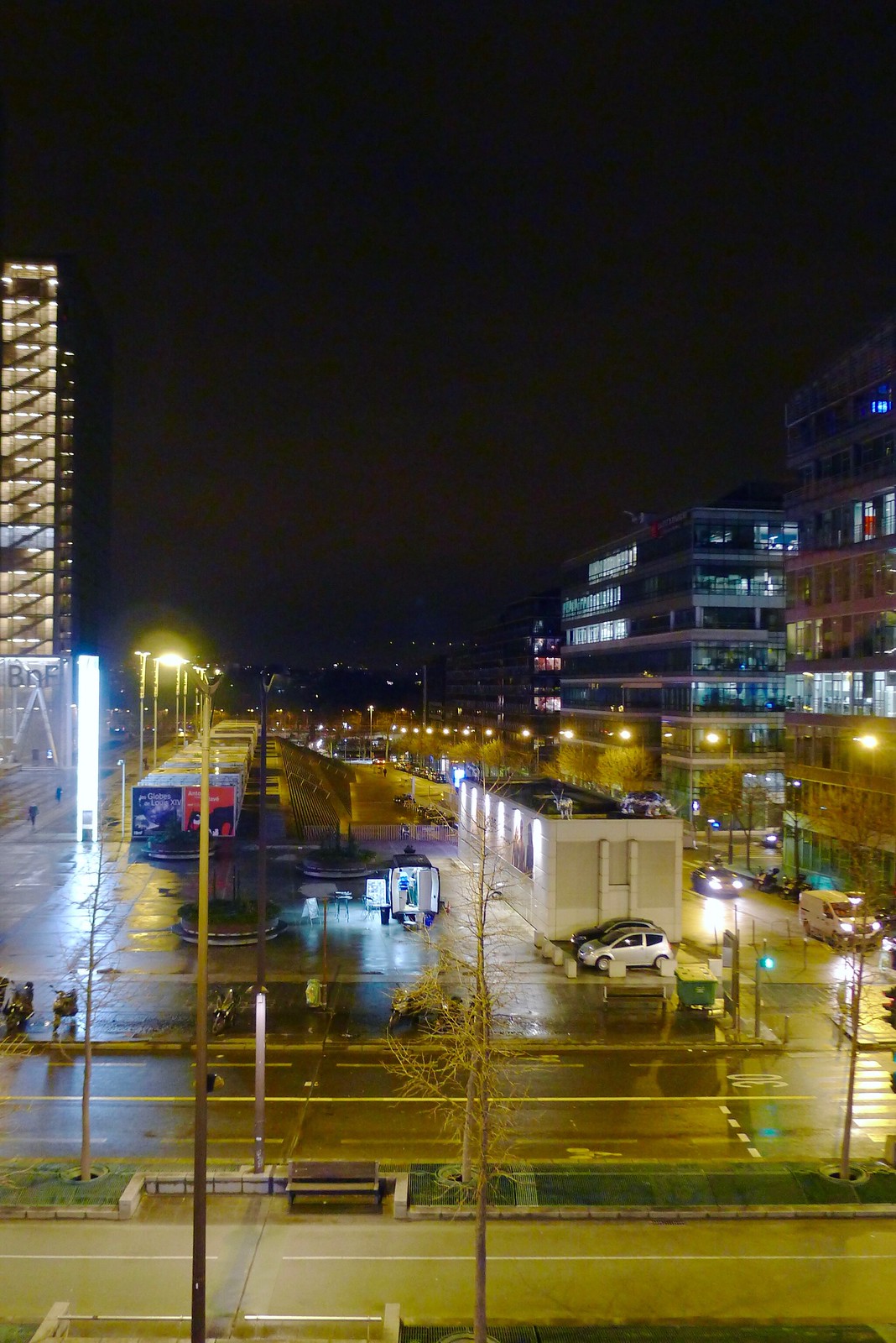 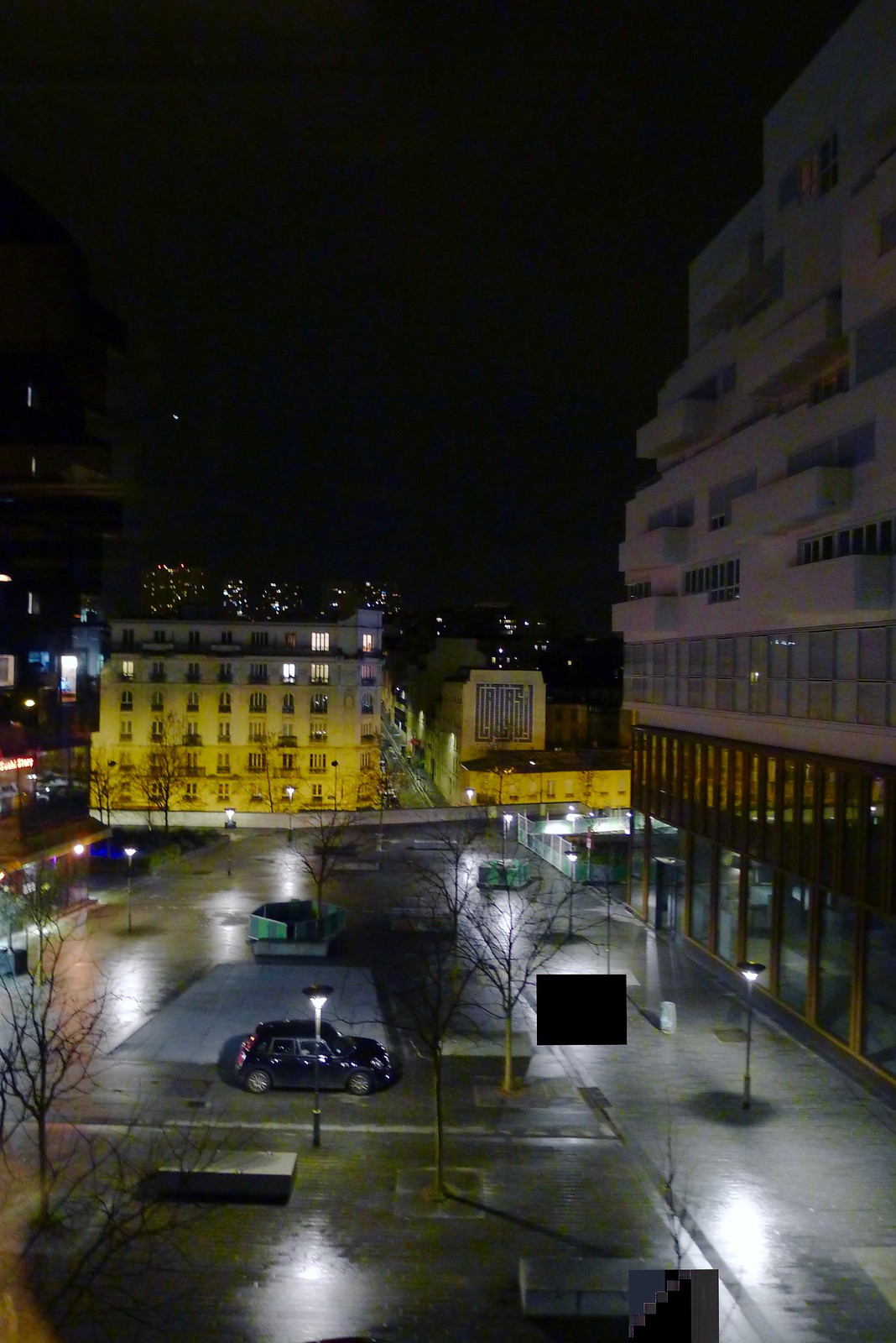 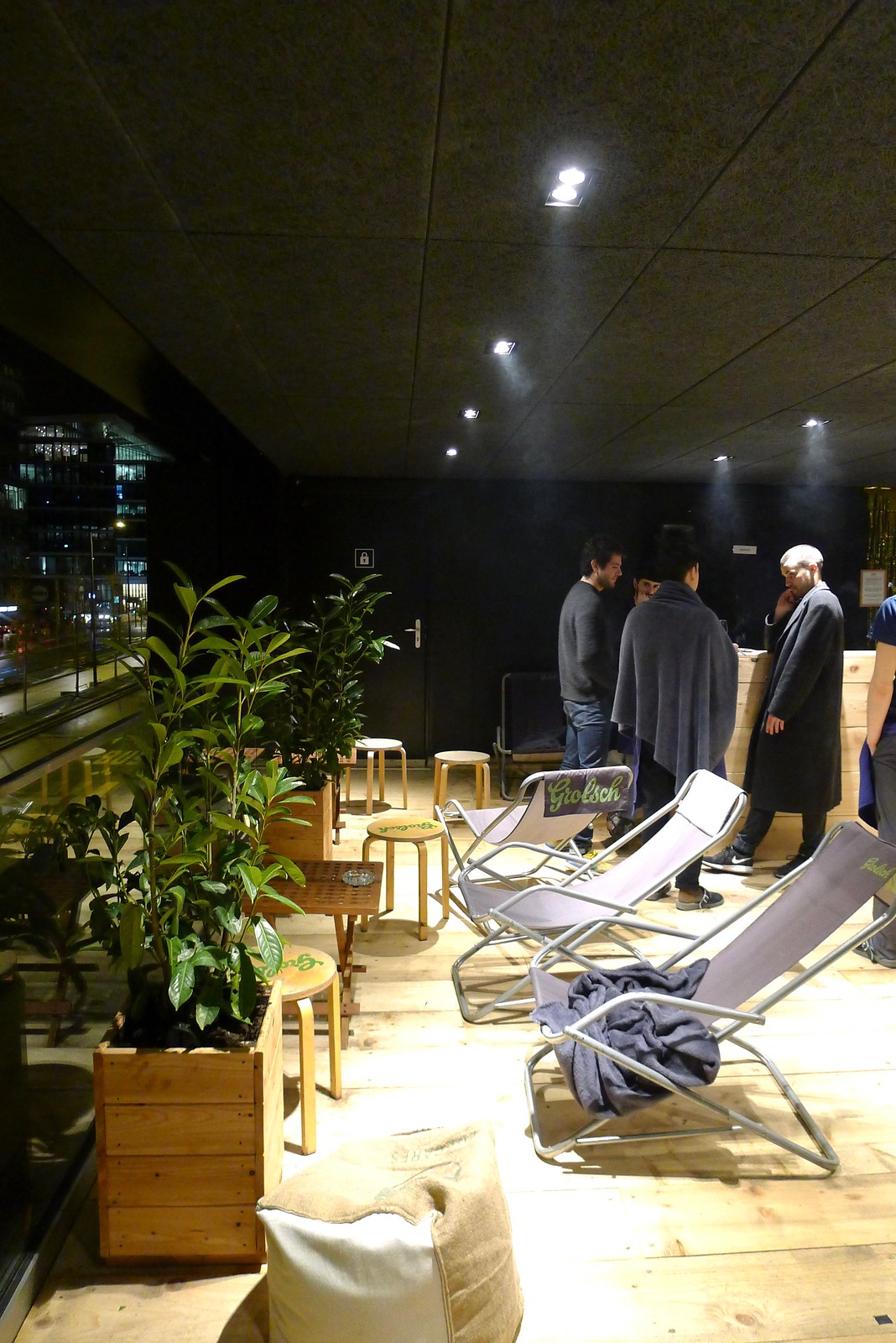 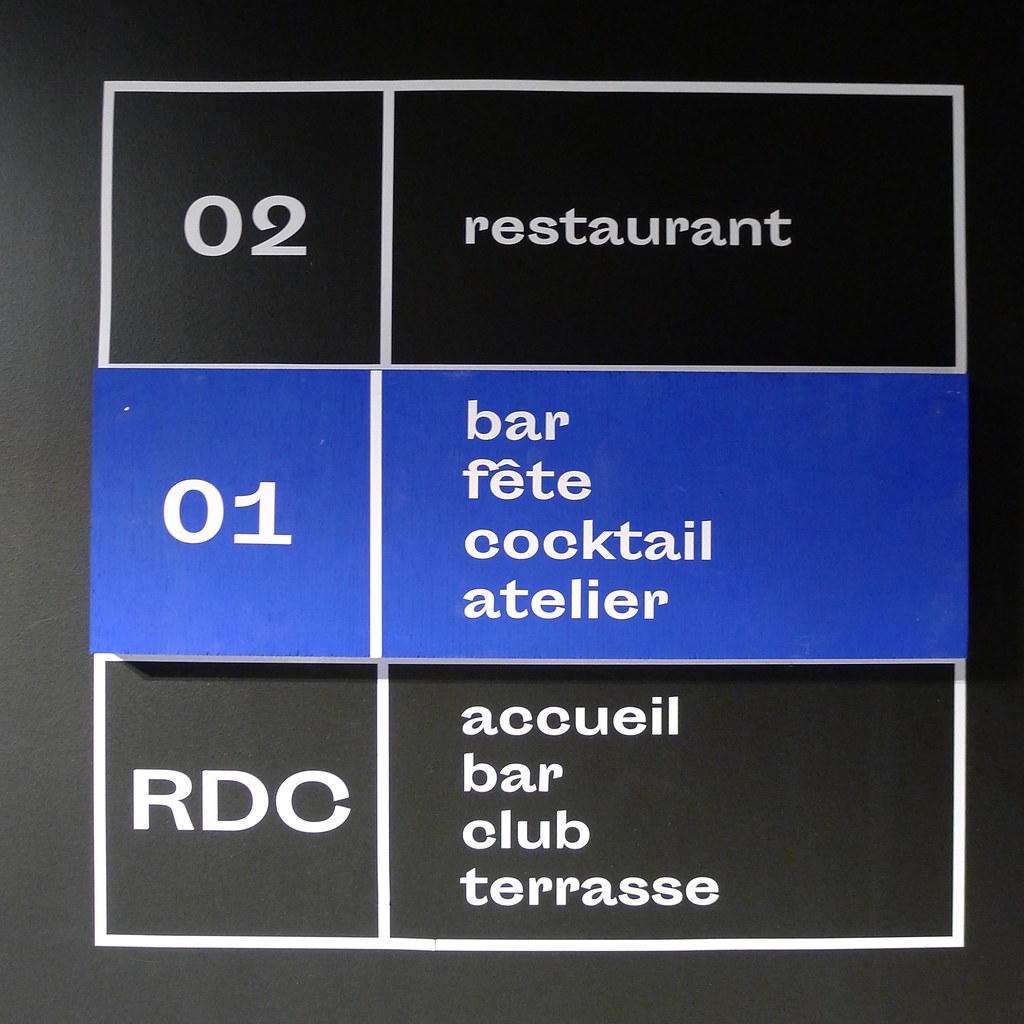 At the top of the building on the second floor is where you’ll find the restaurant EP7, with young chef Adrien Tran in the kitchen. A poster at the entrance explains his background and the concept of the place:

Allowing cuisine and conviviality to soften new technologies – this is the challenge taken up by the team of ep7.

In the kitchen, Adrien Tran. 28 years old, he was born in Paris and grew up in Nantes.

Inspired by a family who loved cooking, Adrien, of Vietnamese origine, returned to Paris to study at the Ferrandi school.

On his CV: three years at Au Passage as assistant chef to Shaun Kelly and Edward Delling Williams, and two years as sous-chef at the Verre Volé with Takao Inazawa.

Interested in all kinds of culinary inspiration, Adrien has huge admiration for Japanese cuisine. He loves cooking fish, which requires care and precision.

At the heart of his cooking, the product: “It deserves respect and attention.”

Don’t ask him what his favourite dish is – he simply lets his imagination and seasonal produce guide the dishes he makes for EP7.

His challenge ➞ to work as much as possible with products from the Paris region.

After this earnest preamble, we enter the restaurant to find a rather neutral room with a lowish ceiling and open kitch along one wall. Should you so desire, you can watch Adrien at work! 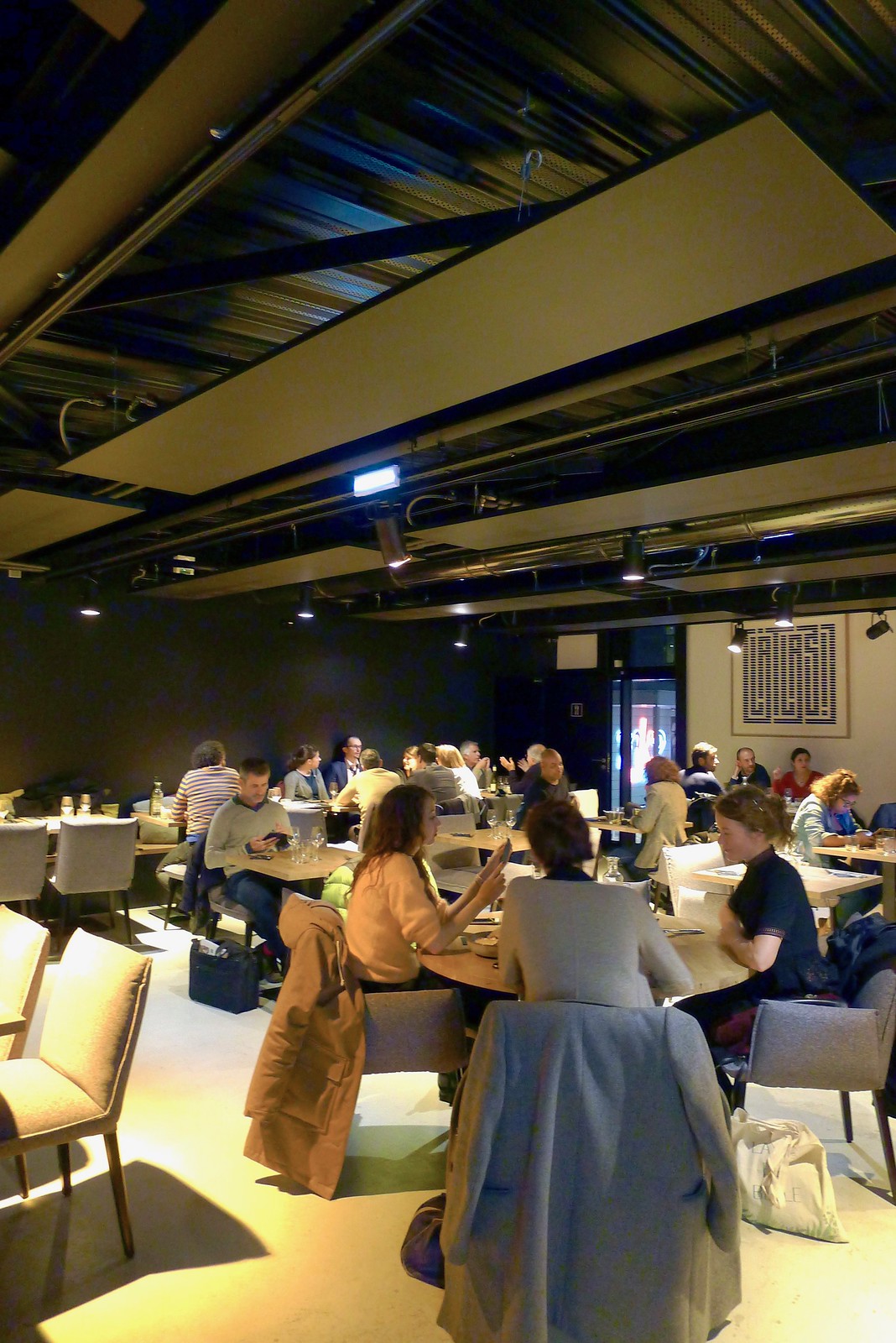 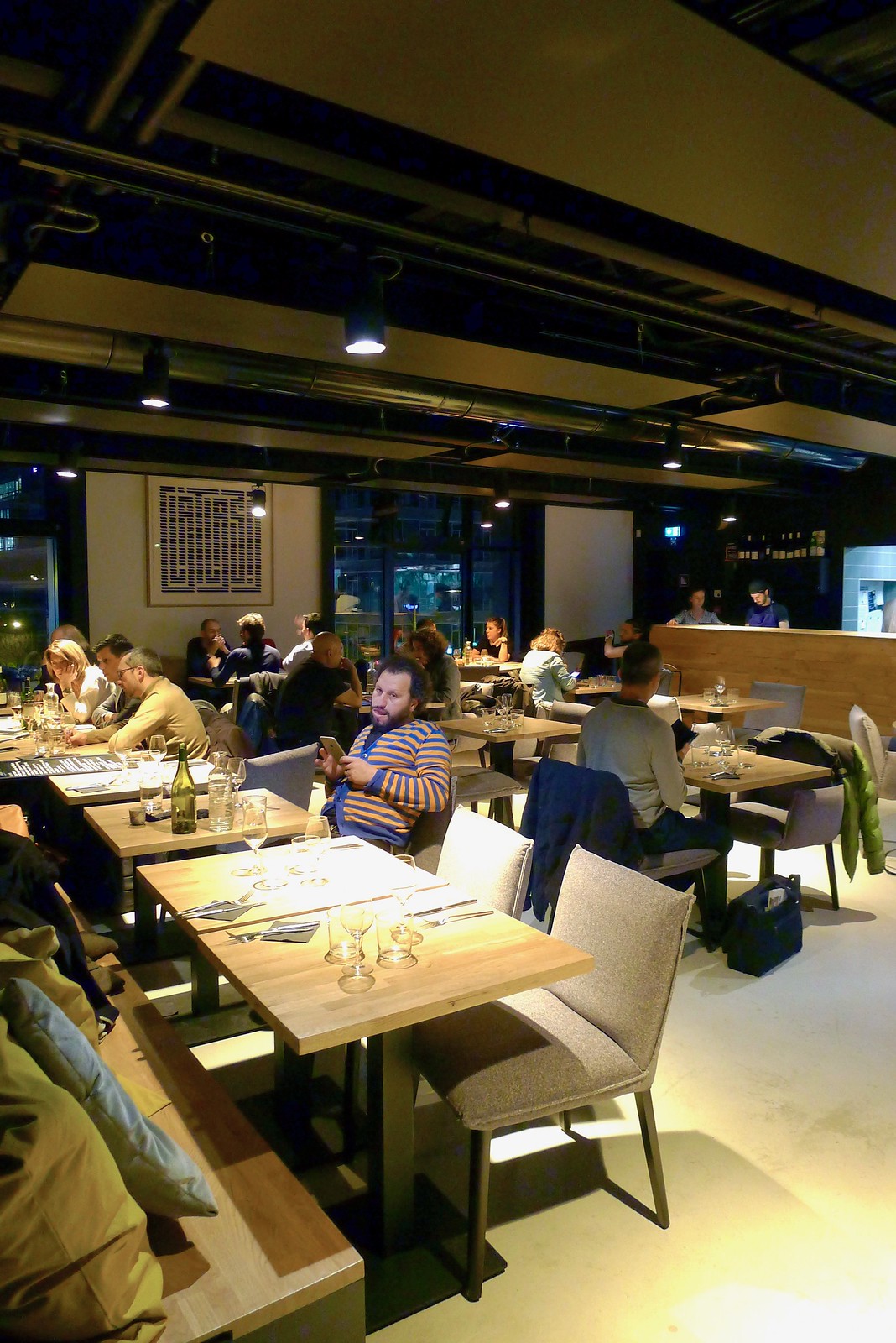 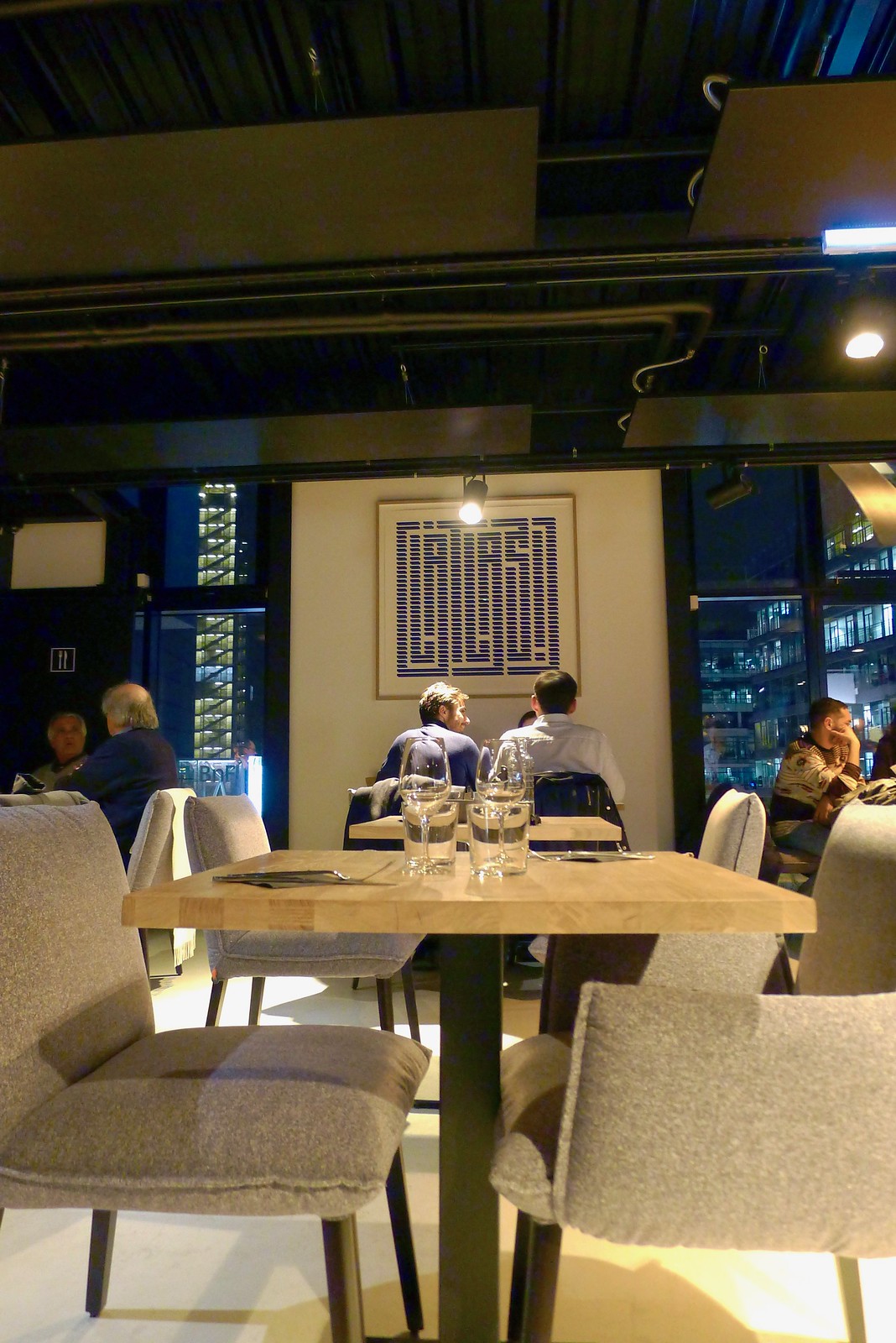 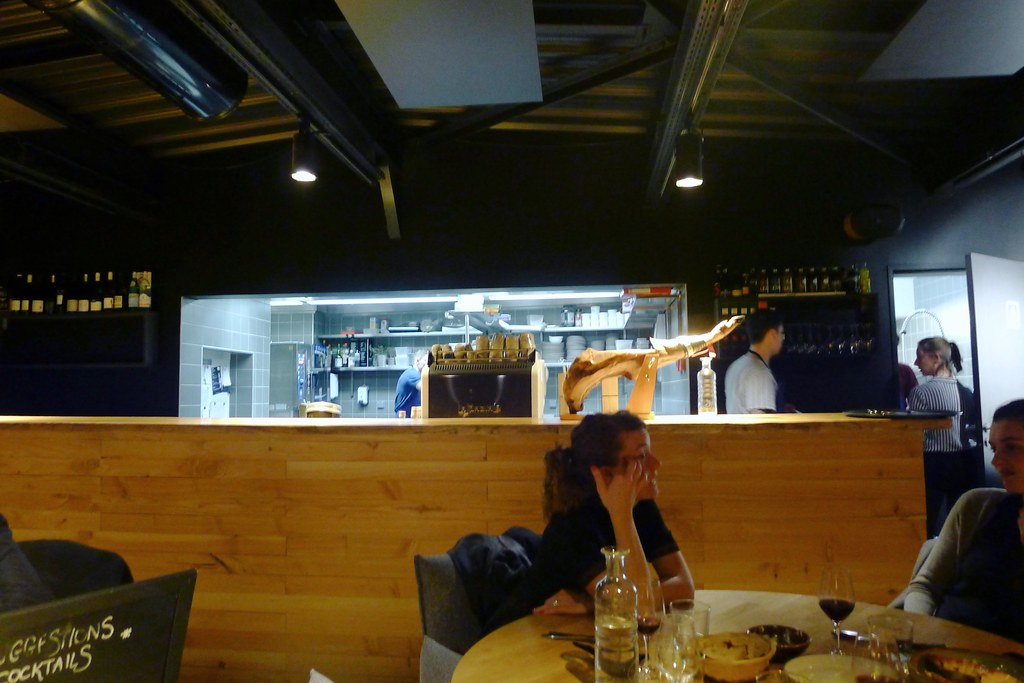 In a neigbourhood not really known for its fine French cuisine, the creativity of the dishes is as surprising as the prices are high.

A first course costs between 8 and 16 euros, mains are around 23 euros and desserts about 8 euros, making a minimum of 40 euros for a three-course meal. That’s daring positioning in this part of town, and it will require a fair bot of word-of-mouth in order for it to work. The night of our visit, the room was not completely full, but then this was only two weeks after their opening night.

A large blackboard displays the menu (which changes daily). 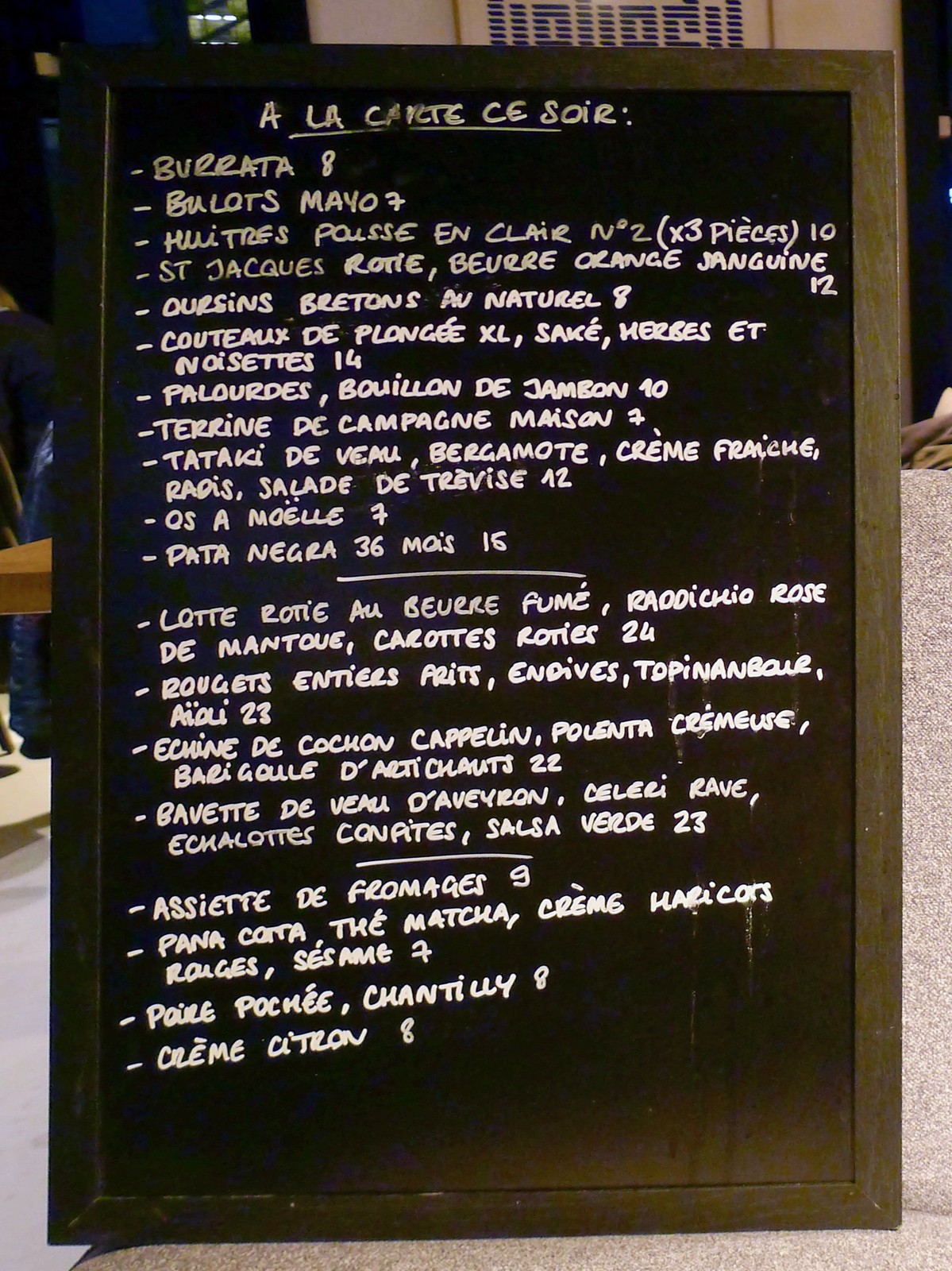 We start with a burrata and sea urchins.

The presentation of the burrata is minimalist to say the least – it’s just plopped into a bowl – although I have to say that with the olive oil, salt and pepper and fresh bread, it was absolutely delicious.

The sea urchins were spectacular too. They usually have quite a light taste, but these were quite strong, with a definite smell of the sea. 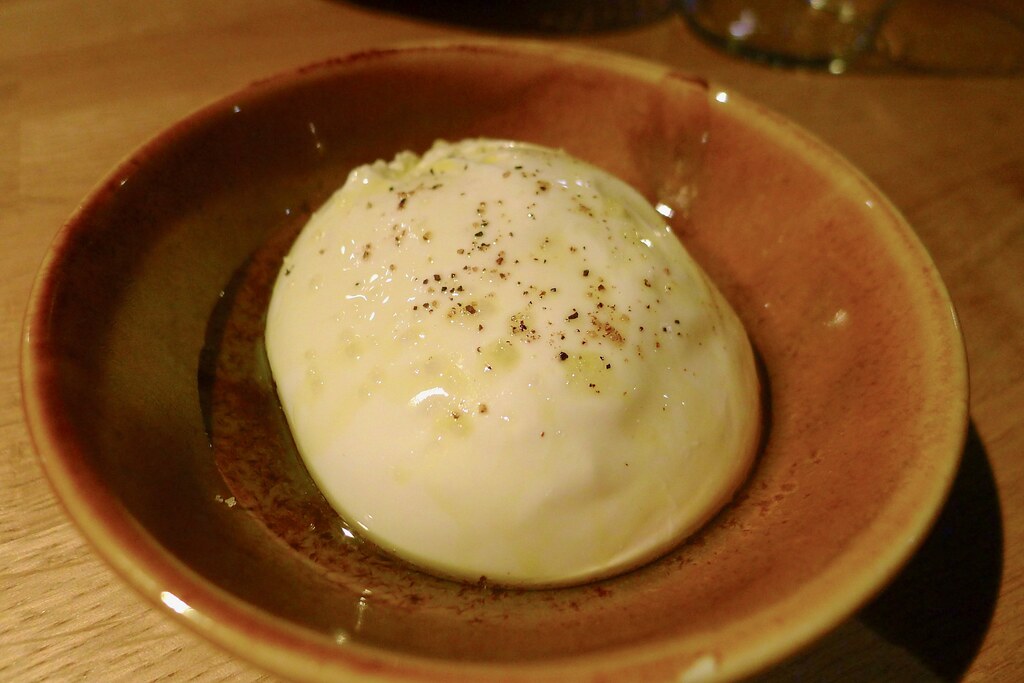 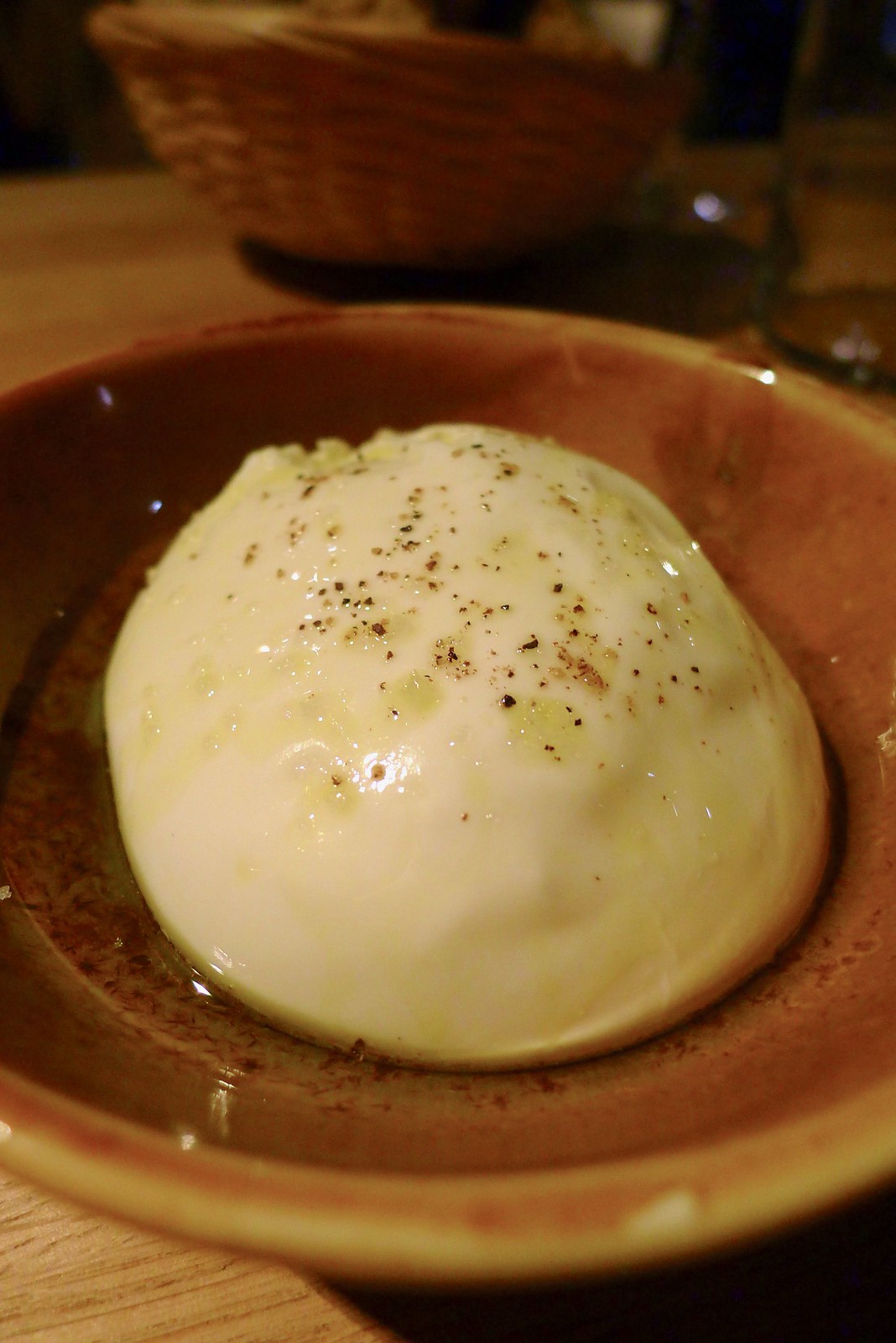 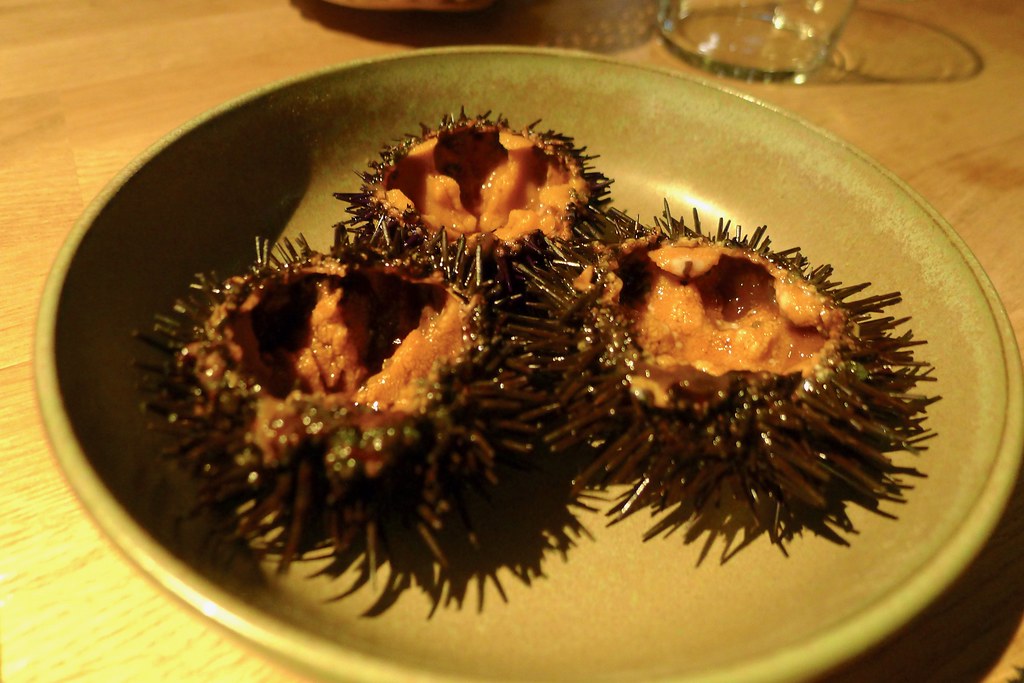 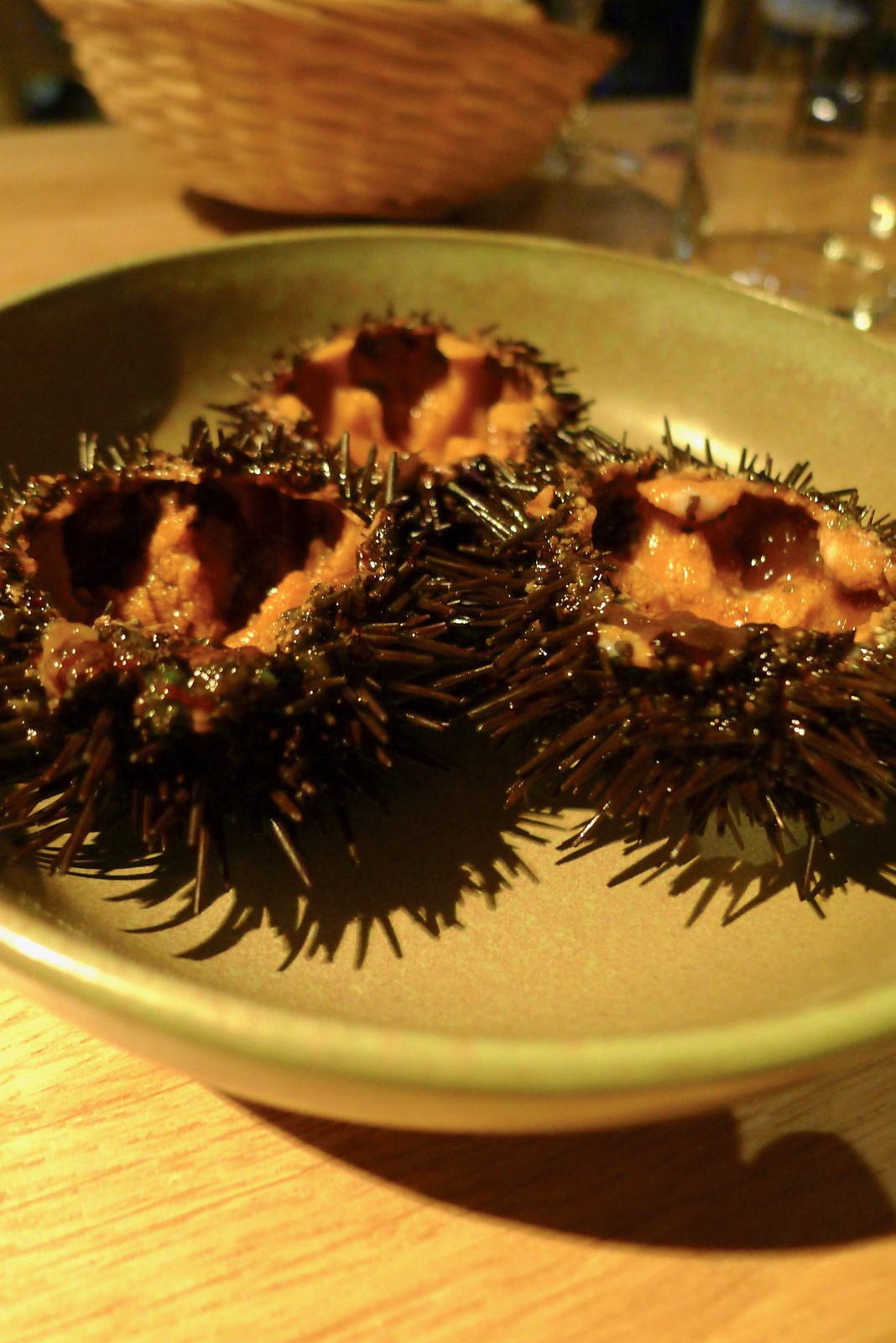 For the main dishes, we chose the two most expensive ones on the menu:

– monkfish roasted in smoked butter, pink radicchio from Mantua and roasted carrots, and
– a flank of veal from the Aveyron region, celeriac, candied shallots and salsa verde

(In passing, it’s interesting to note that the radicchio comes from Italy and the veal from the Aveyron, rather than around the Paris region, as stated in the concept of the place.)

The monkfish was incredibly salty, but bizarrely really good like that! The presentation was also impressive.

The veal was firm, with almost the same consistency as a viande en croûte. The salsa verde went down well too, seemingly a mix of herbs, garlic and olive oil. 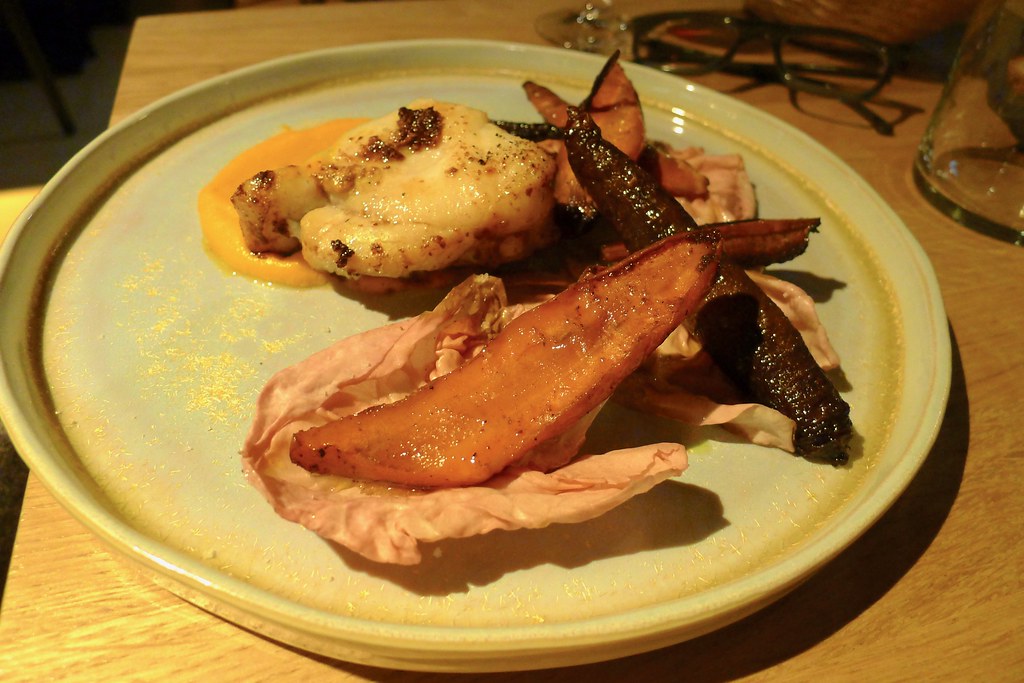 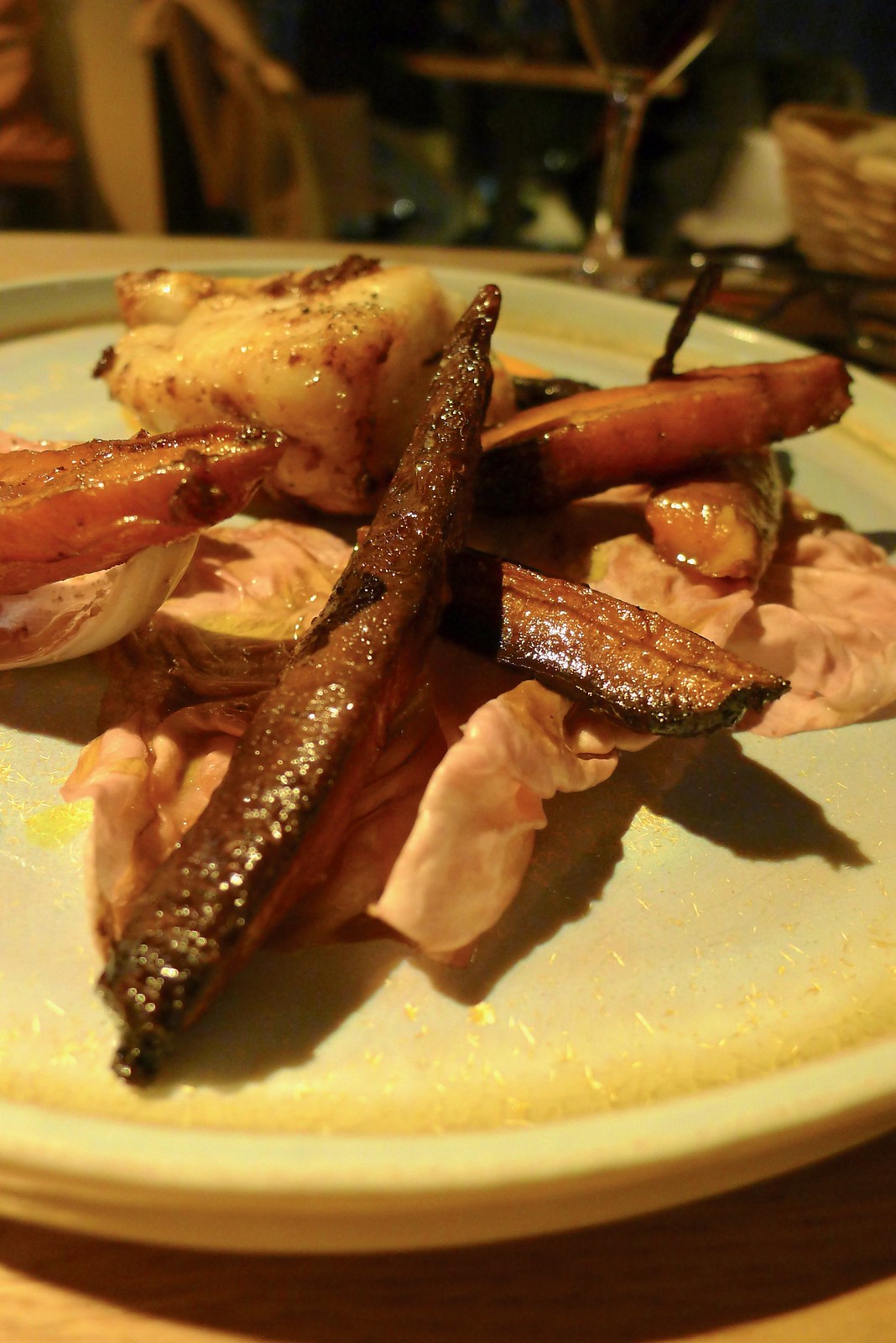 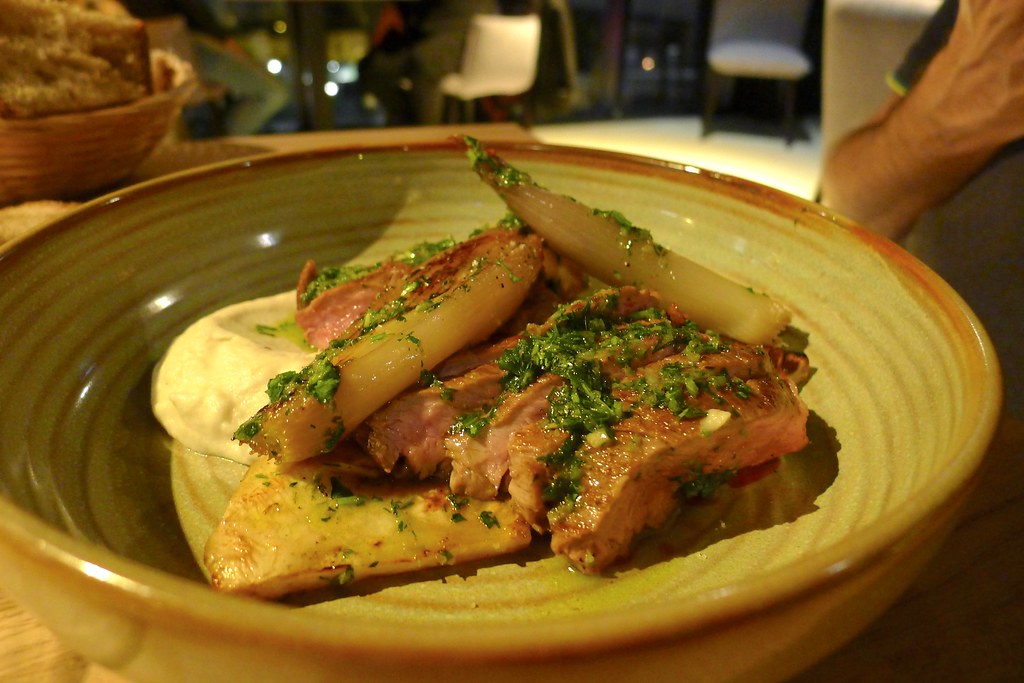 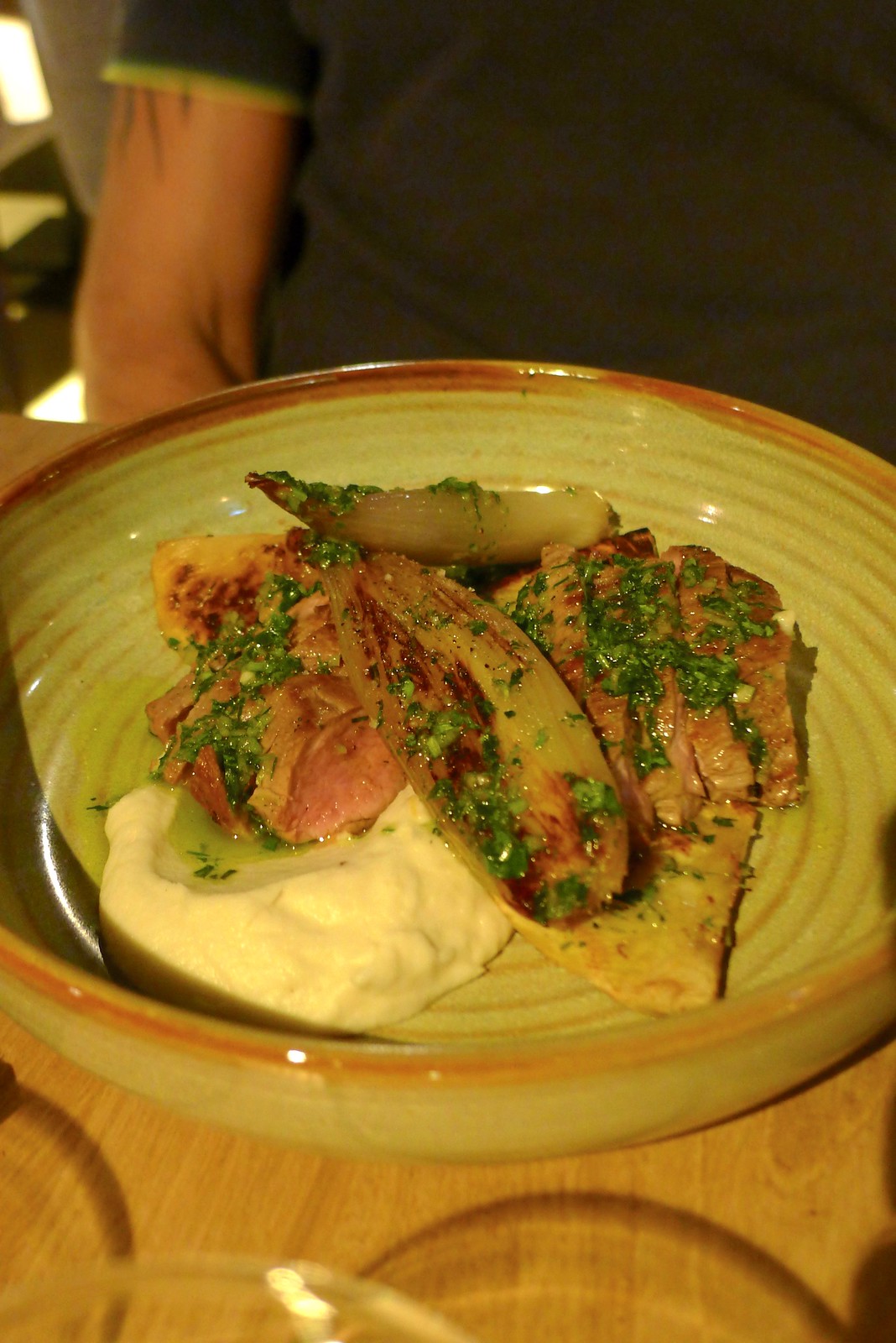 Dessert time! Don’t get excited though – apart from a cheese option, there are only three things on offer. For us, that meant a choice between pana cotta with Matcha tea, creamed red beans and sesame seeds, poached pear with whipped cream or lemon meringue. We chose the pana cotta and the latter.

The lemon meringue is prettily presented in a deconstructed manner with a streak of meringue on one side of the bowl. The lemon itself was suitably sweet – very enjoyable.

Unfortunately, the pana cotta was less of a success (and my dinner partner considers himself a bit of an expert on the matter, having tried dozens of them). Not only was it far too runny (surely this can’t have been on purpose?), but also the taste of the tea was extremely difficult to find. For the end of our meal, it was a bit disappointing. 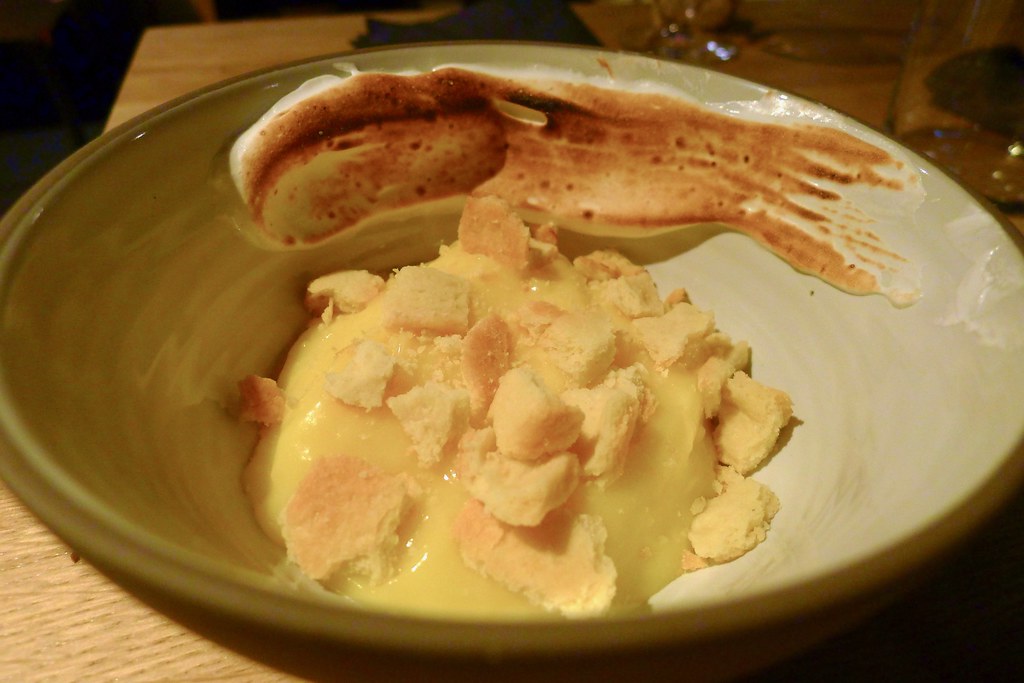 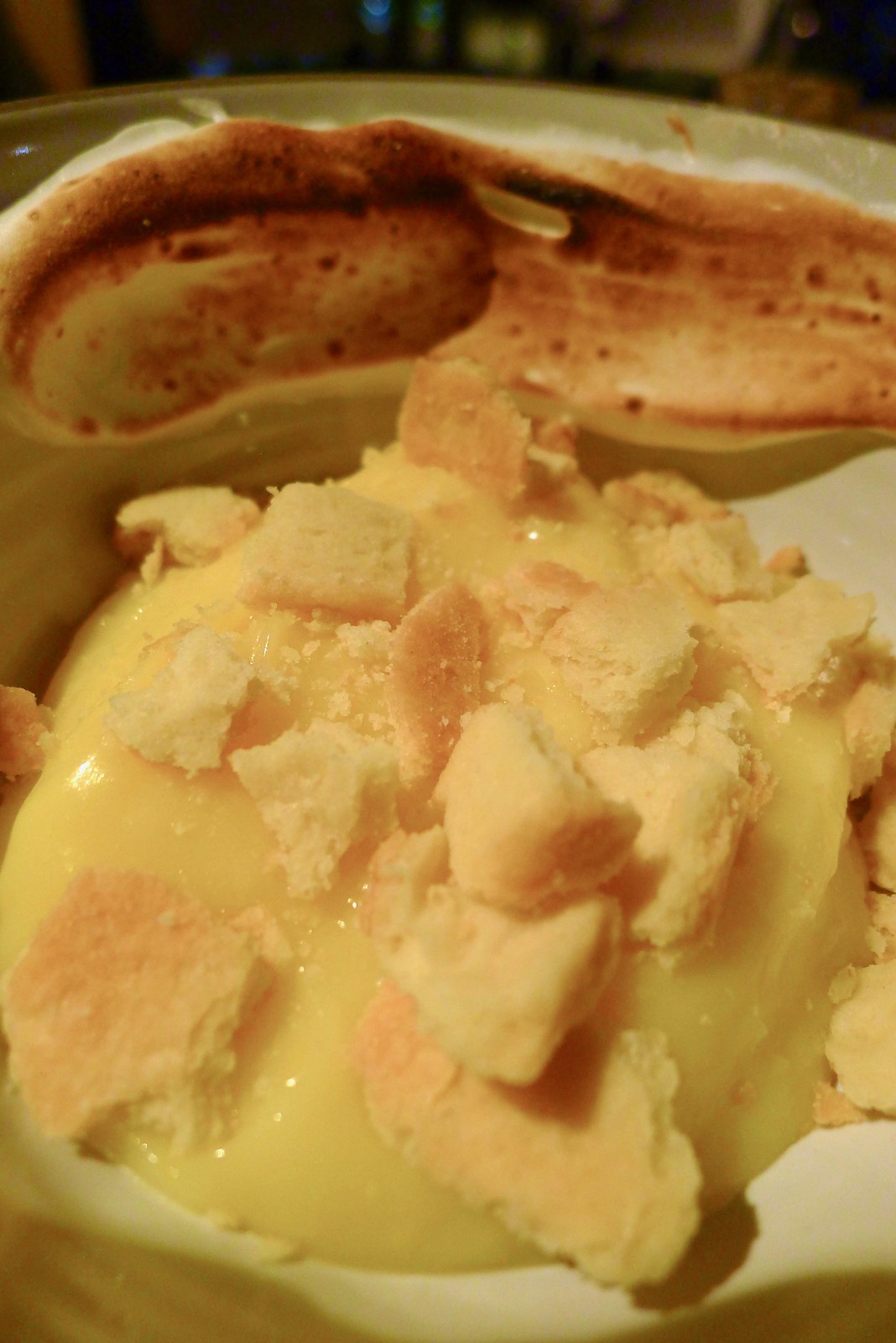 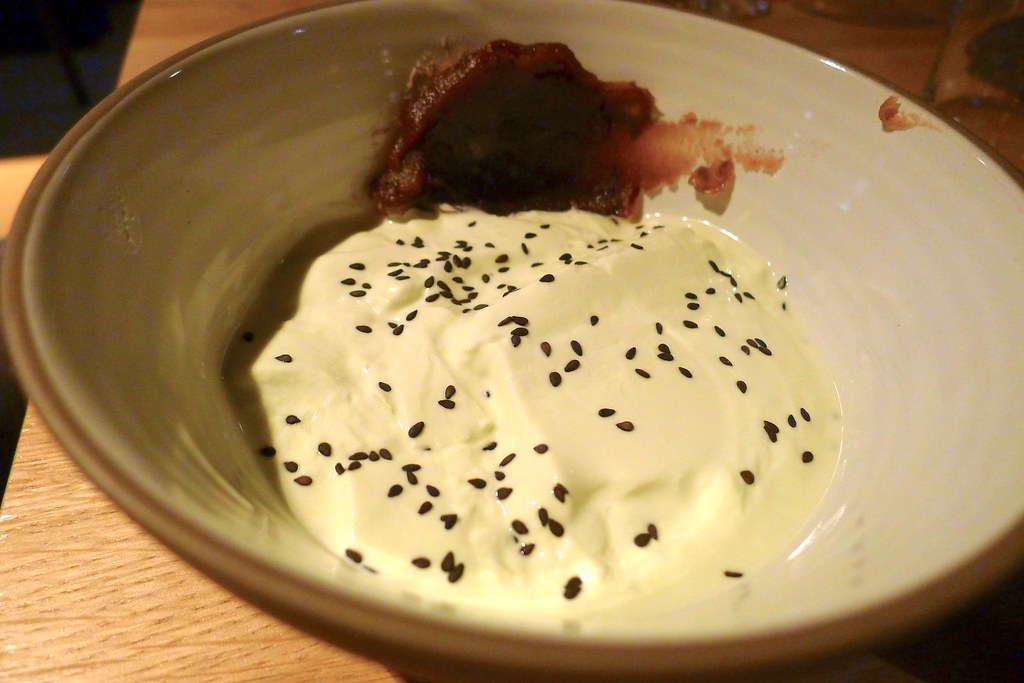 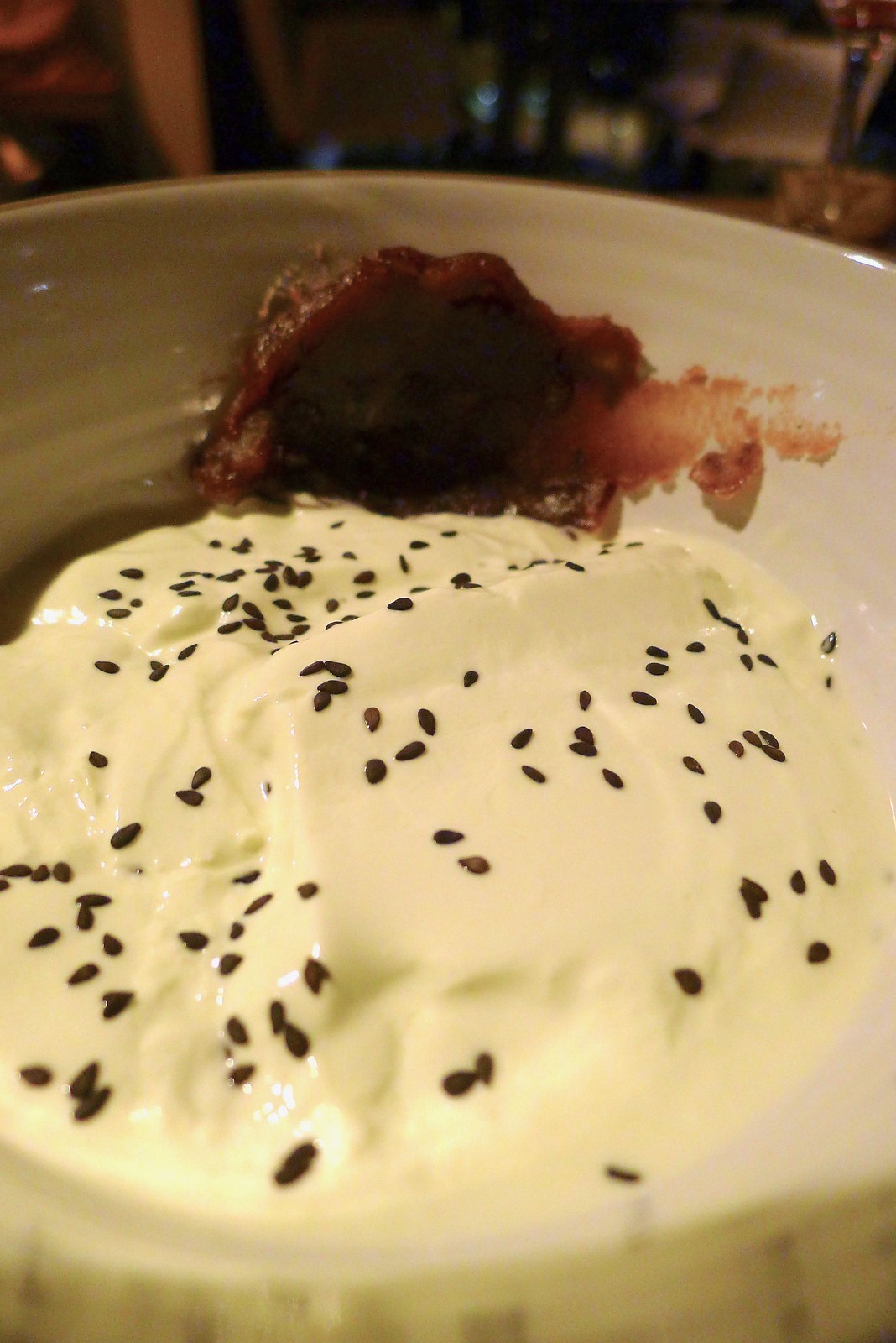 With our meal over, the room starts to empty. It’s late, and most of the team is now on the middle floor of the building, an open terrace used for smoking.

The ground floor bar is completely empty too. 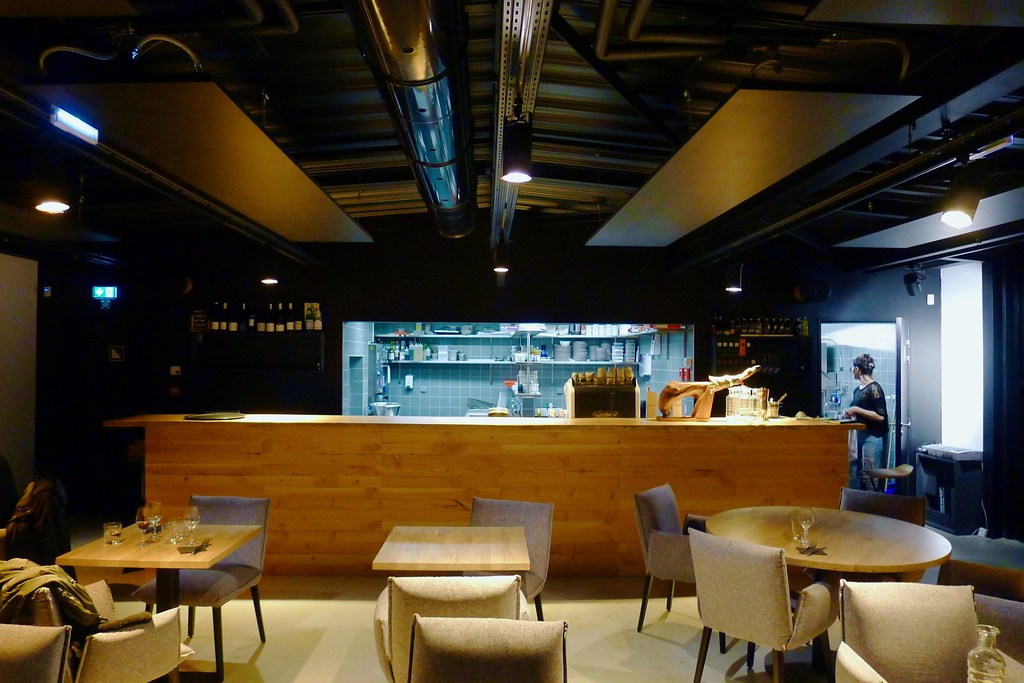 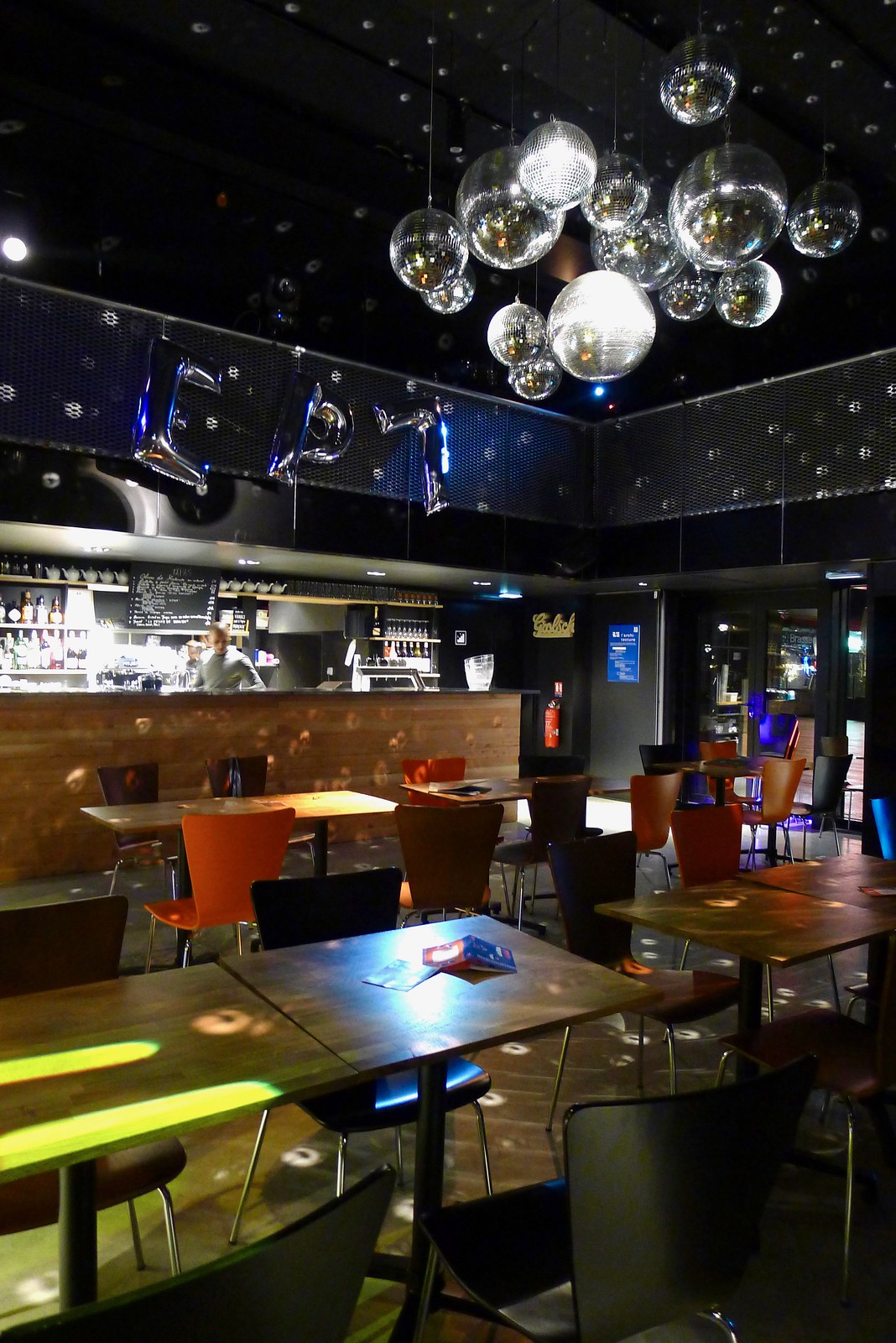 EP7 is undoubtedly poised to get very busy, very soon. We can easily imagine their terrace being packed during the day, and the bar and restaurant heaving with people at night.

The place has a new approach mixing good music, good food and visual creativity. Oh, and the restaurant staff are adorable.

We enjoyed our night there, although it certainly wasn’t cheap, and there were as many great successes as small disappointments. Let’s give them a bit of time to sort things out – we have no doubt it will become a very cool place to eat in the near future.

The EP7 restaurant (here) is open for lunch and dinner from Tuesday-Saturday, and the bar is open every day of the week from 9.30am-2am!

To check out all our photos of EP7, simply click here.