We visit the Atelier des Lumières

A Parisian experience, Art and Culture

In a former 19th century foundry, the Atelier des Lumières has just opened with a concept you won’t find anywhere else in Paris. It’s the first ‘digital art centre’ in the city.

In this huge, high space, HD projections are accompanied by surround sound to incredible effect.

Culturespaces, which already manages the Jacquemart-André Museum and the Maillol Museum near our hotels has just opened its new space in Paris – the Atelier des Lumières, and it’s quite astonishing.

Originally, the space – over 3,000m² – was a foundry, created in 1835 by the Plichon brothers, but after a century of profitable trading, the company fell on hard times between the two World Wars.

In 1935, the Martin family invested the space, using it as a showroom for their machine tools, but after they moved out in 2000, the space remained empty before being rented to Culturespaces in 2013.

A little like the son et lumières shows in the summer (for example, the one at Invalides at the moment), the idea is to present a cultural programme combining high definition projections, animation and music.

When you enter the dark space, it’s a little difficult to understand exactly its dimensions. It’s only after a few minutes that your eyes acclimatise and you can really see how vast the place is. 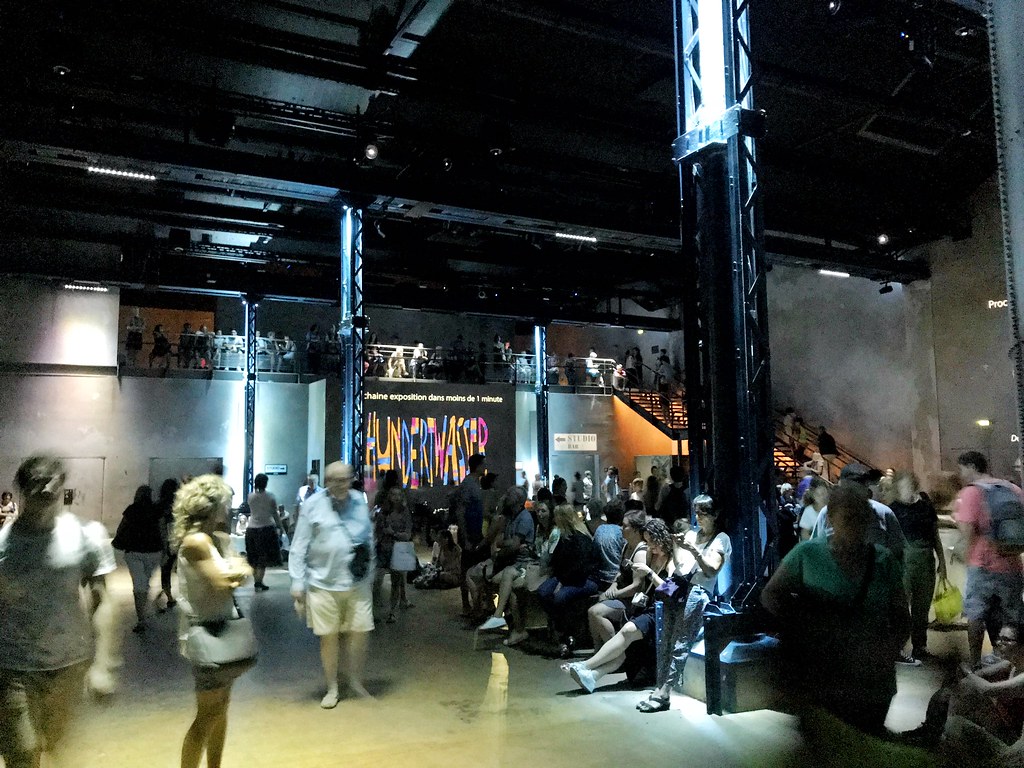 Currently, there are three programmes being shown one after the other each day:

– Gustave Klimt, until 11th November, is the longest of the three shows (around twenty minutes).

– Hundertwasser, in the Wake of the Vienna Secession is shorter and also runs until 11th November.

– And Poetic_Ai by the Ouchhh collective (17 minutes long) which continues until 31st August, is quite avant-garde, with experimental electronic music.

A short version of this is shown in the main room, but the full video can be seen in the intimate bard, under the mezzanine which is at one end of the huge room.

The bar allows you to be at the heart of the video, projected 360° around you. It’s quite the experience.

And starting 7th Septembre, Poetic_AI is being replaced by a new films called Colours X Colours. Once again, it’s in the Studio that you’ll be able to see it close up and in full.

All the exhibitions are shown non-stop (you don’t need to turn up at a particular time) and you can either sit in one spot for a particular view, or walk around the space during the projections and see how the experience is different from the various areas.

For example, there’s a large empty column in the middle of the room that you can enter (to see the projections inside it), a room with mirrors on every surface (a wild experience), a mezzanine for a view of most of the room and even a water pool sunk into one corner, with projections on the bottom!

It’s impressive how different the room can look depending on the different projections. Even the floor is used as a screen, and seeing Klimt’s images so big is pretty increidble. 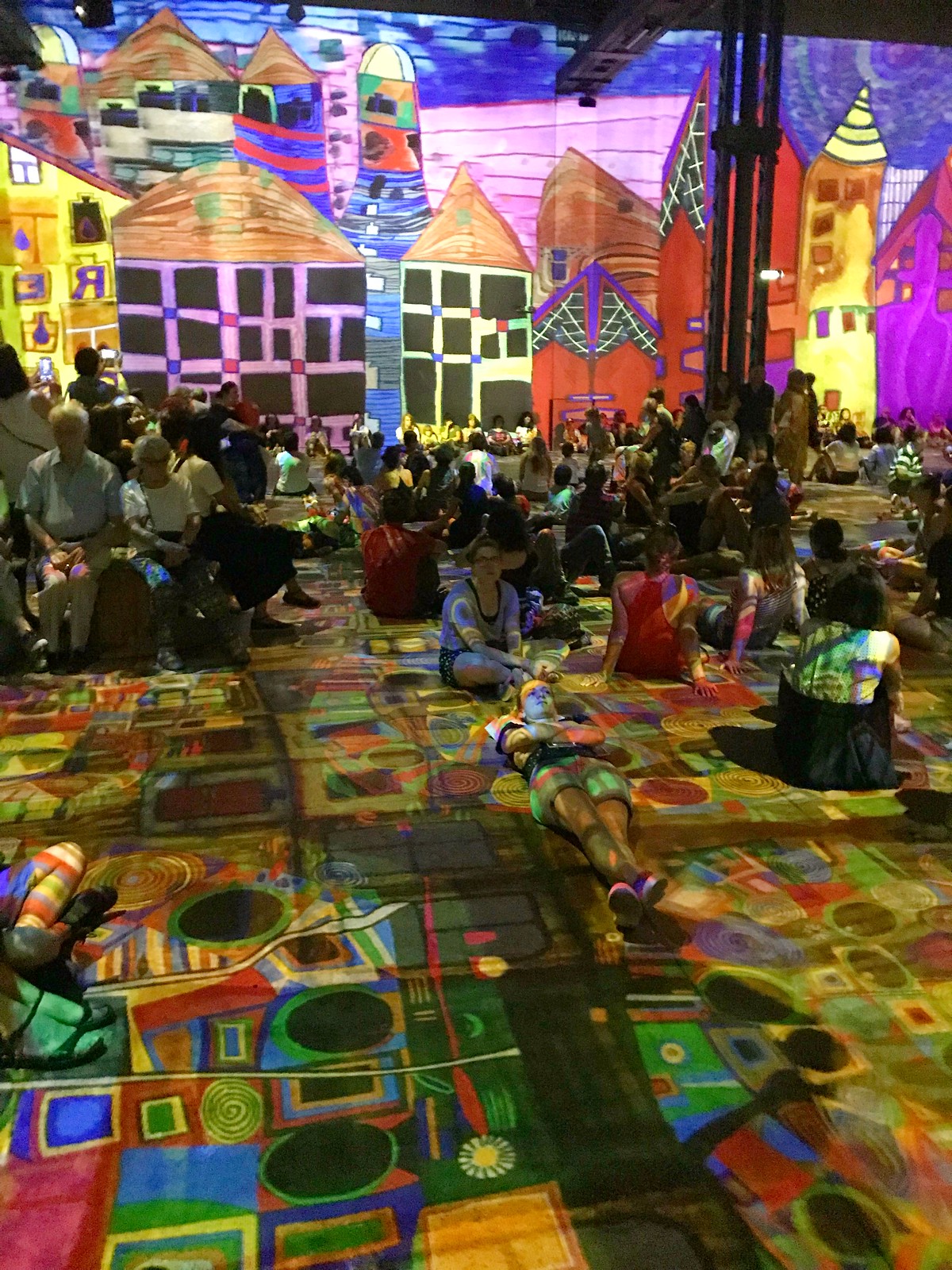 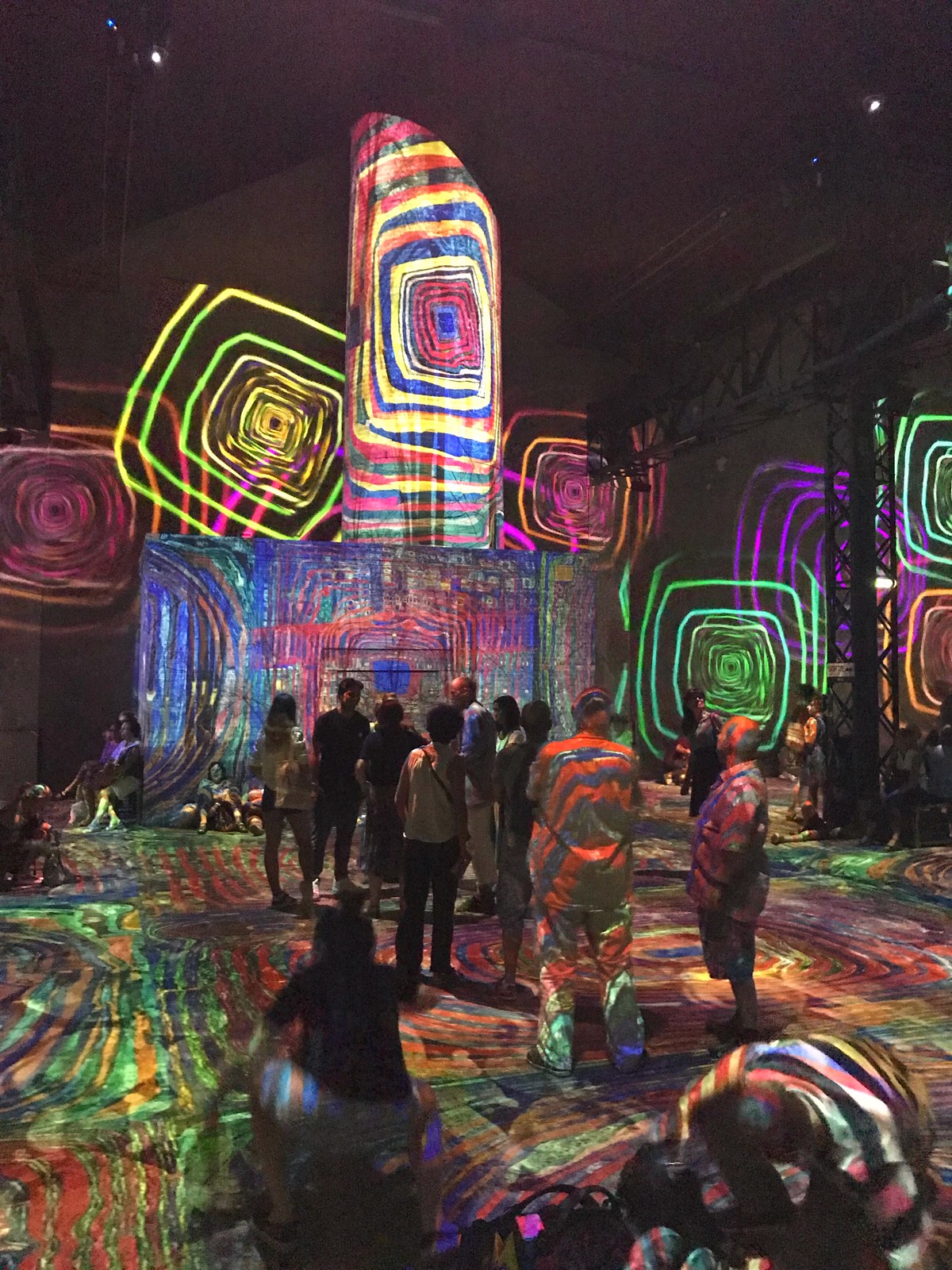 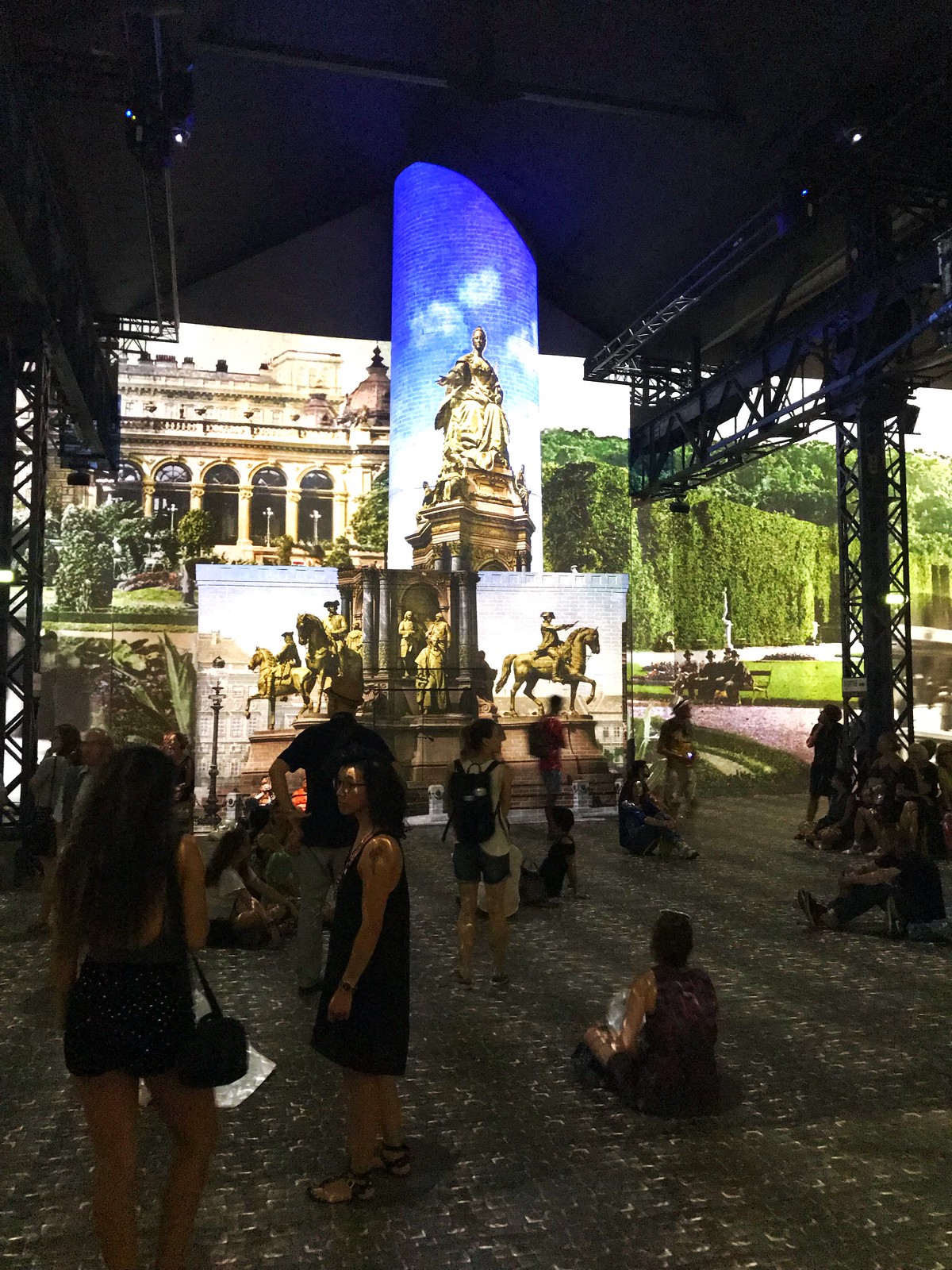 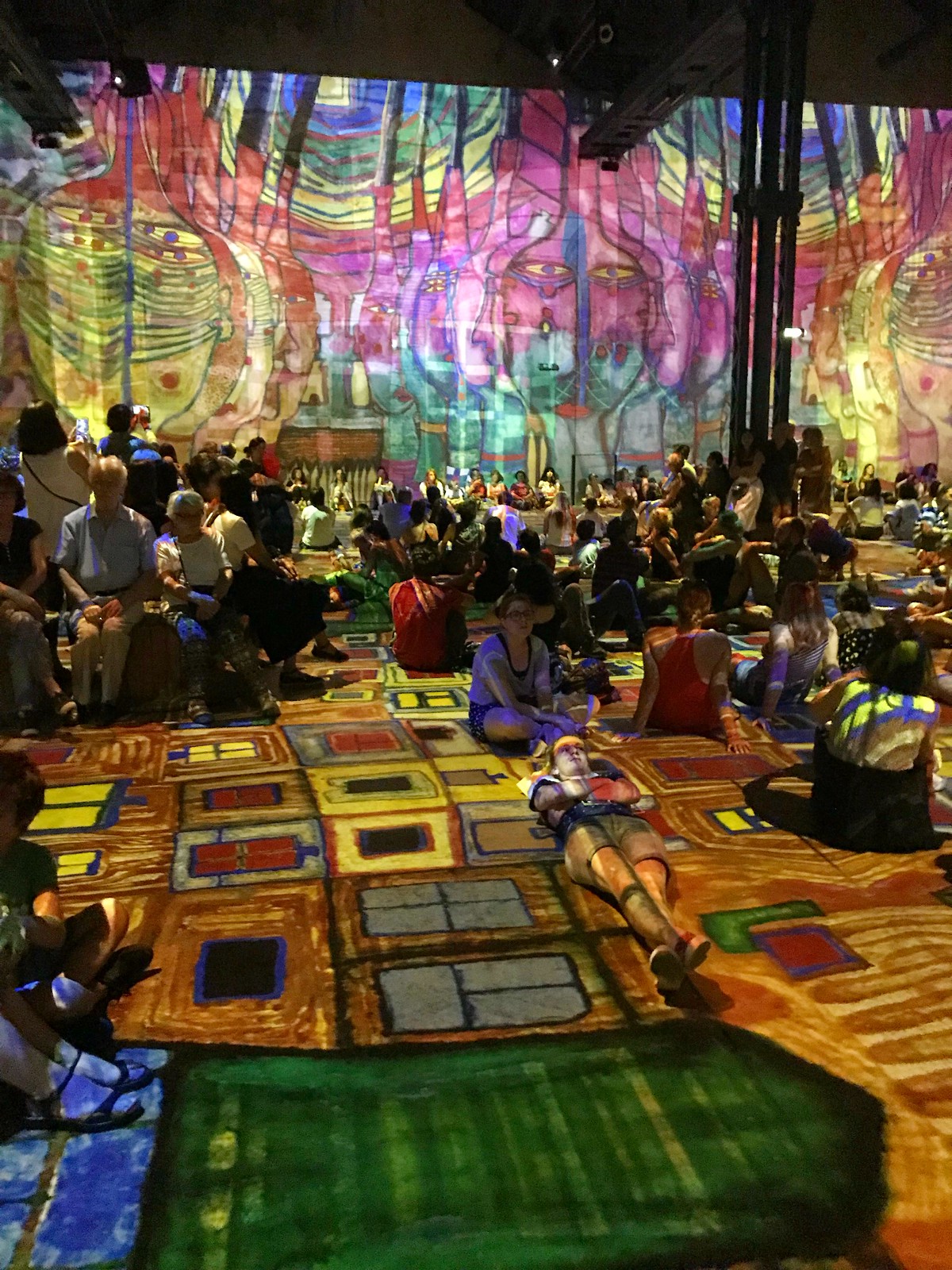 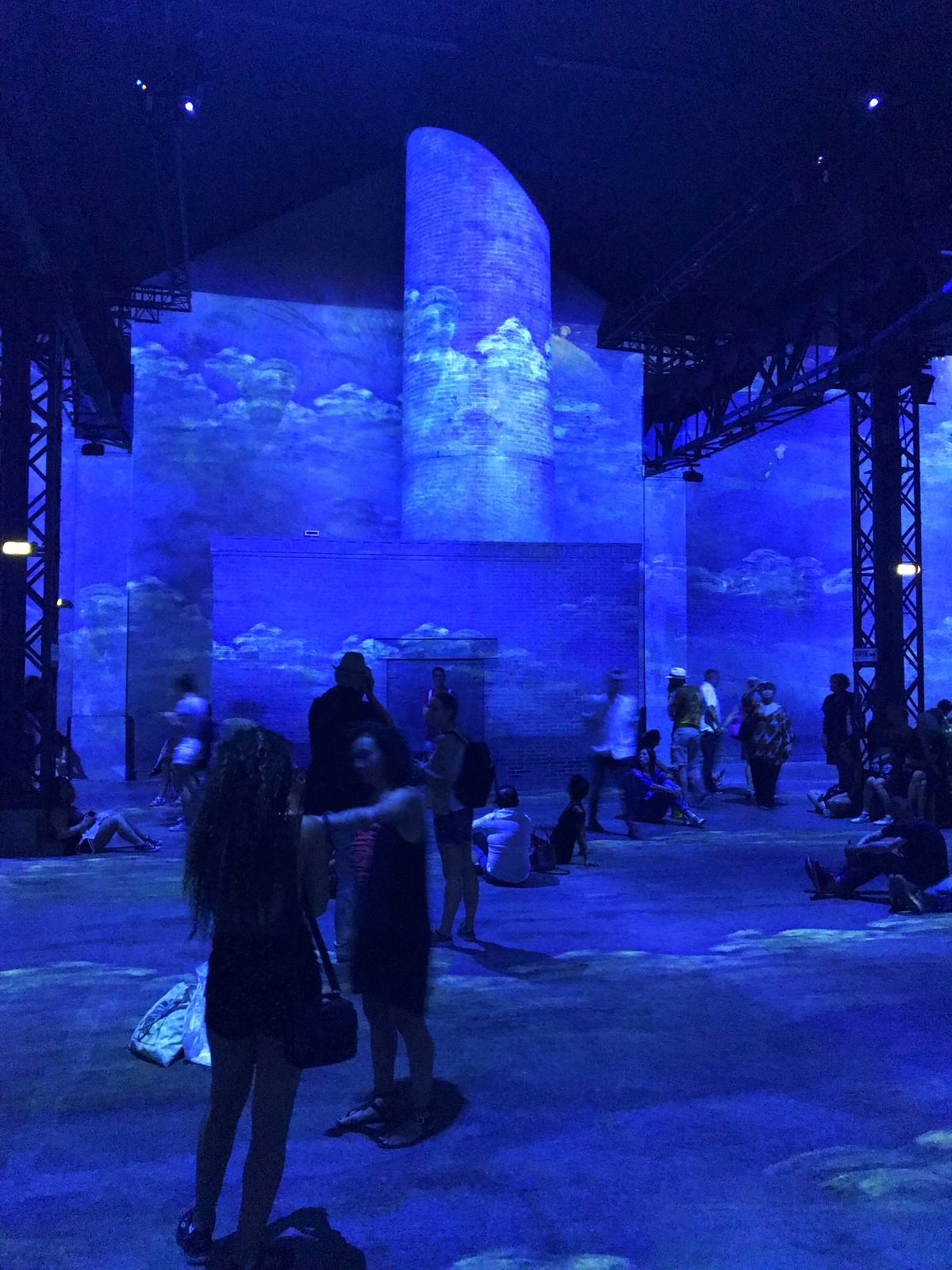 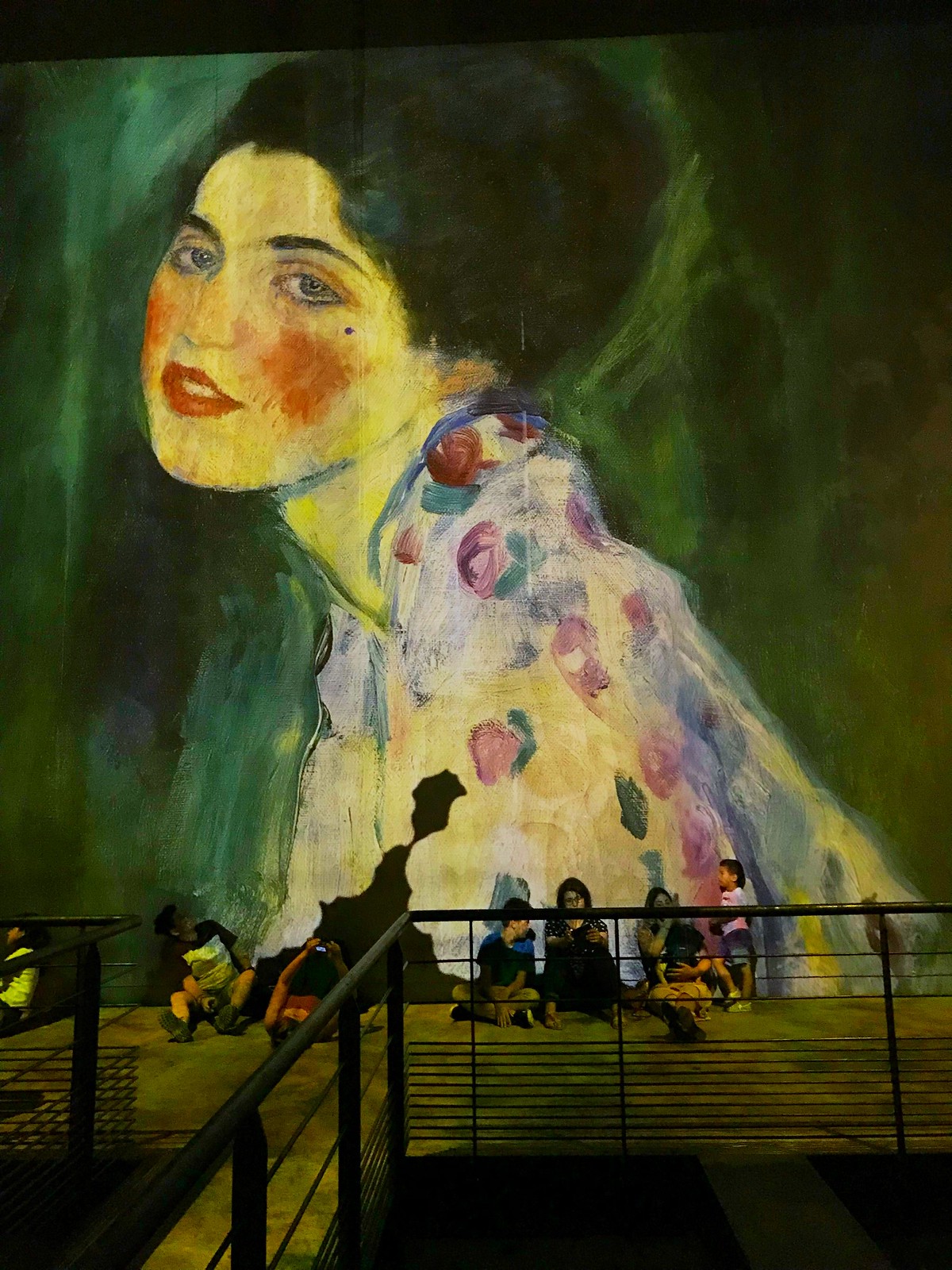 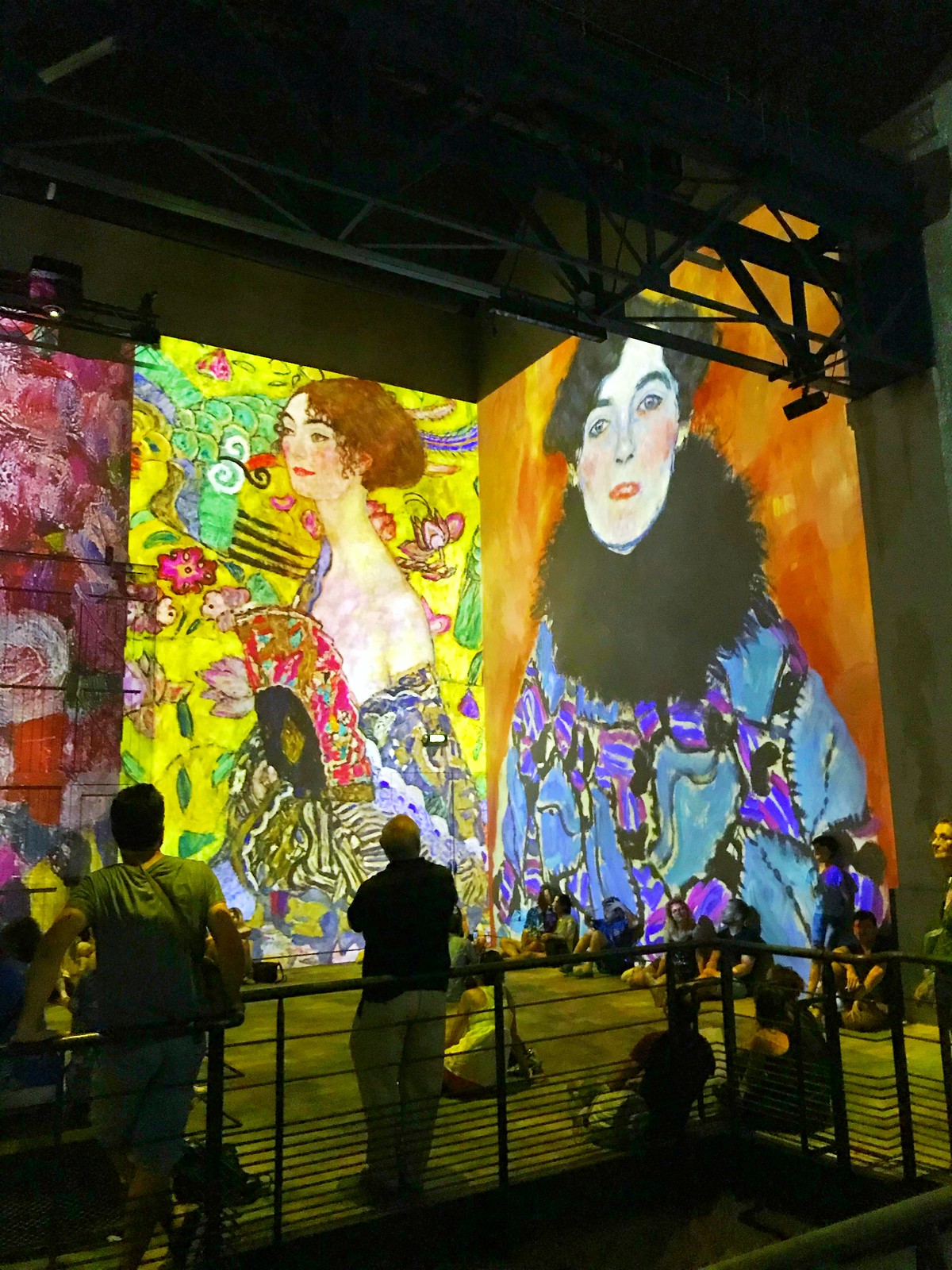 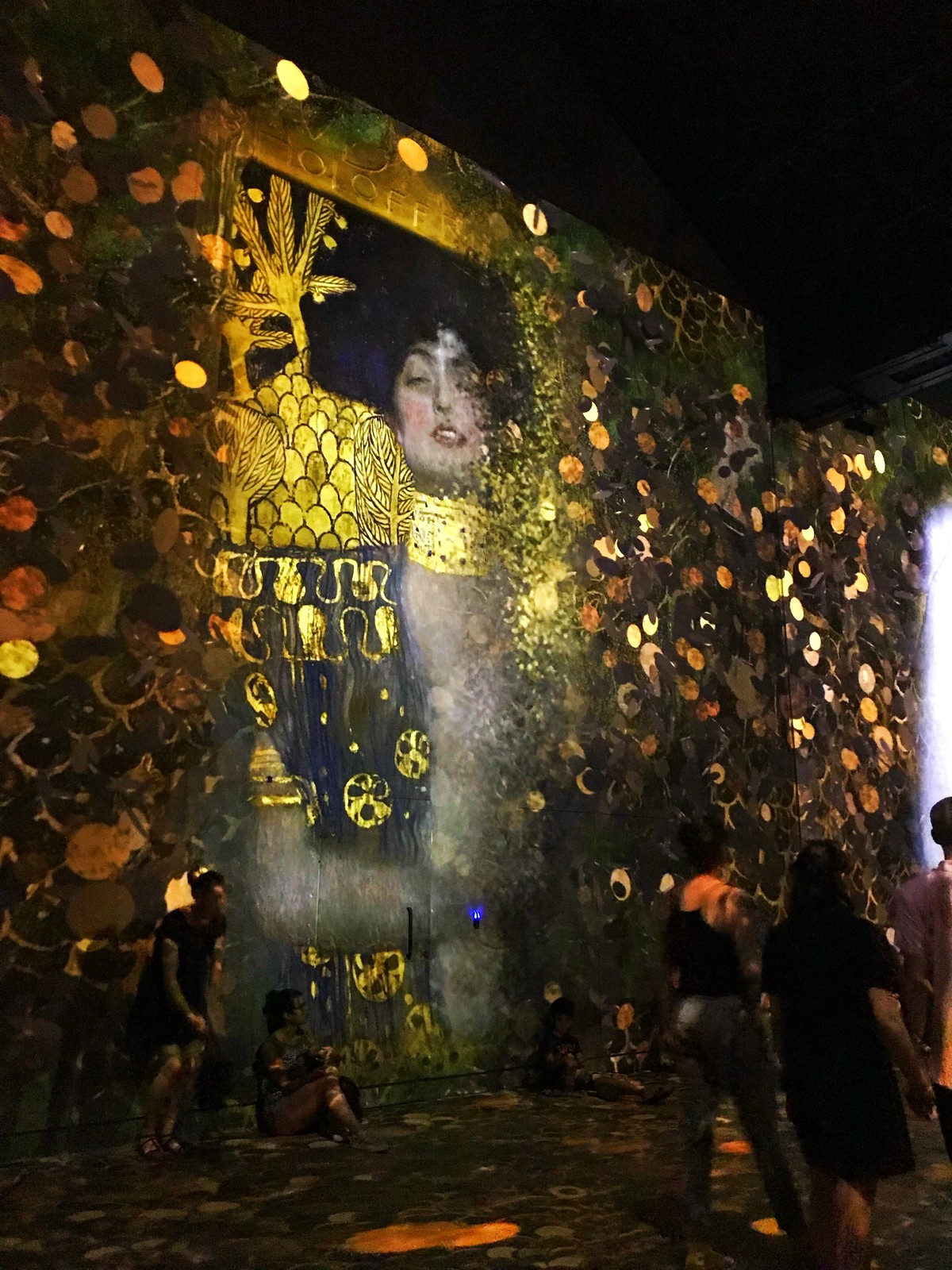 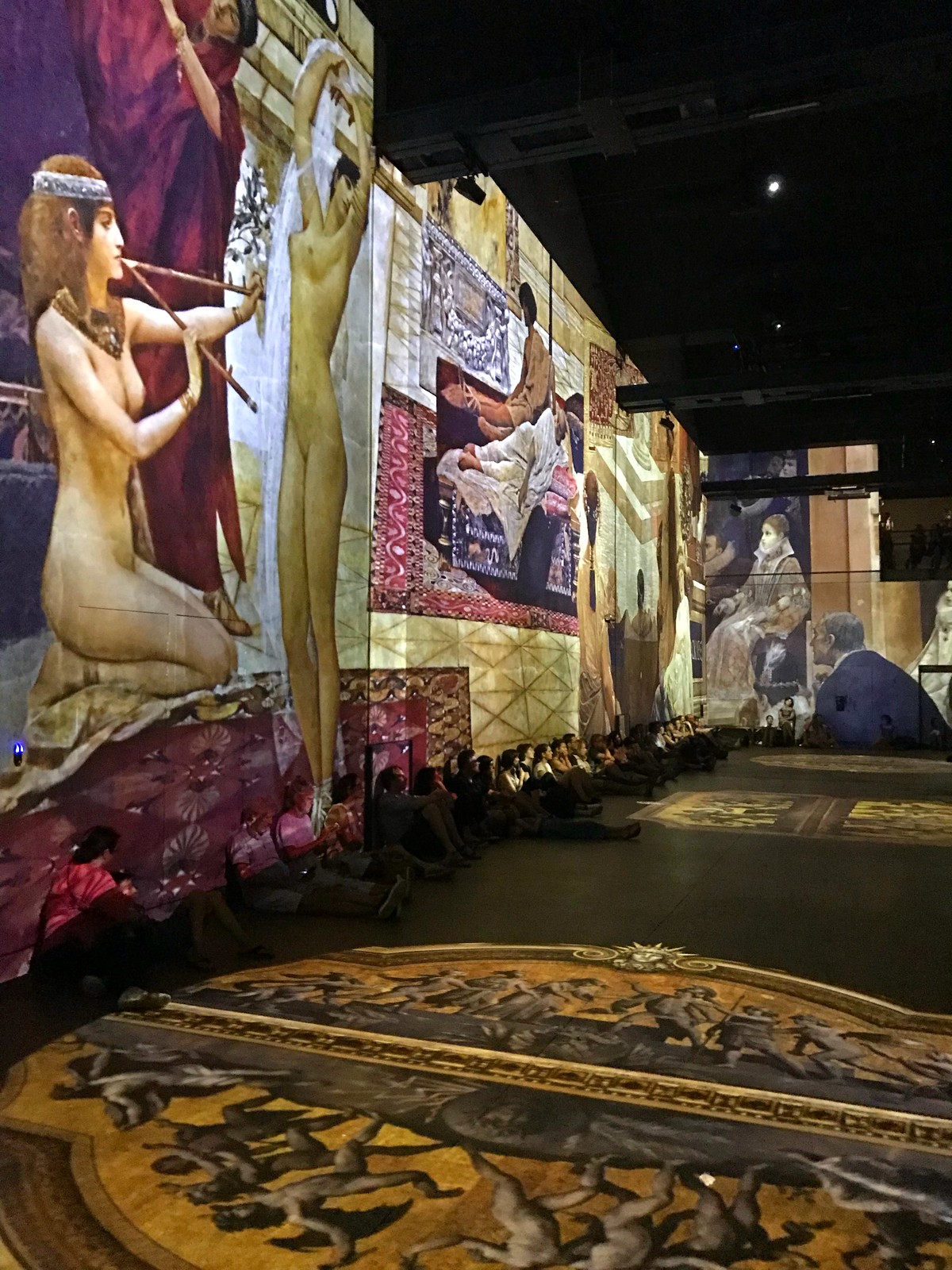 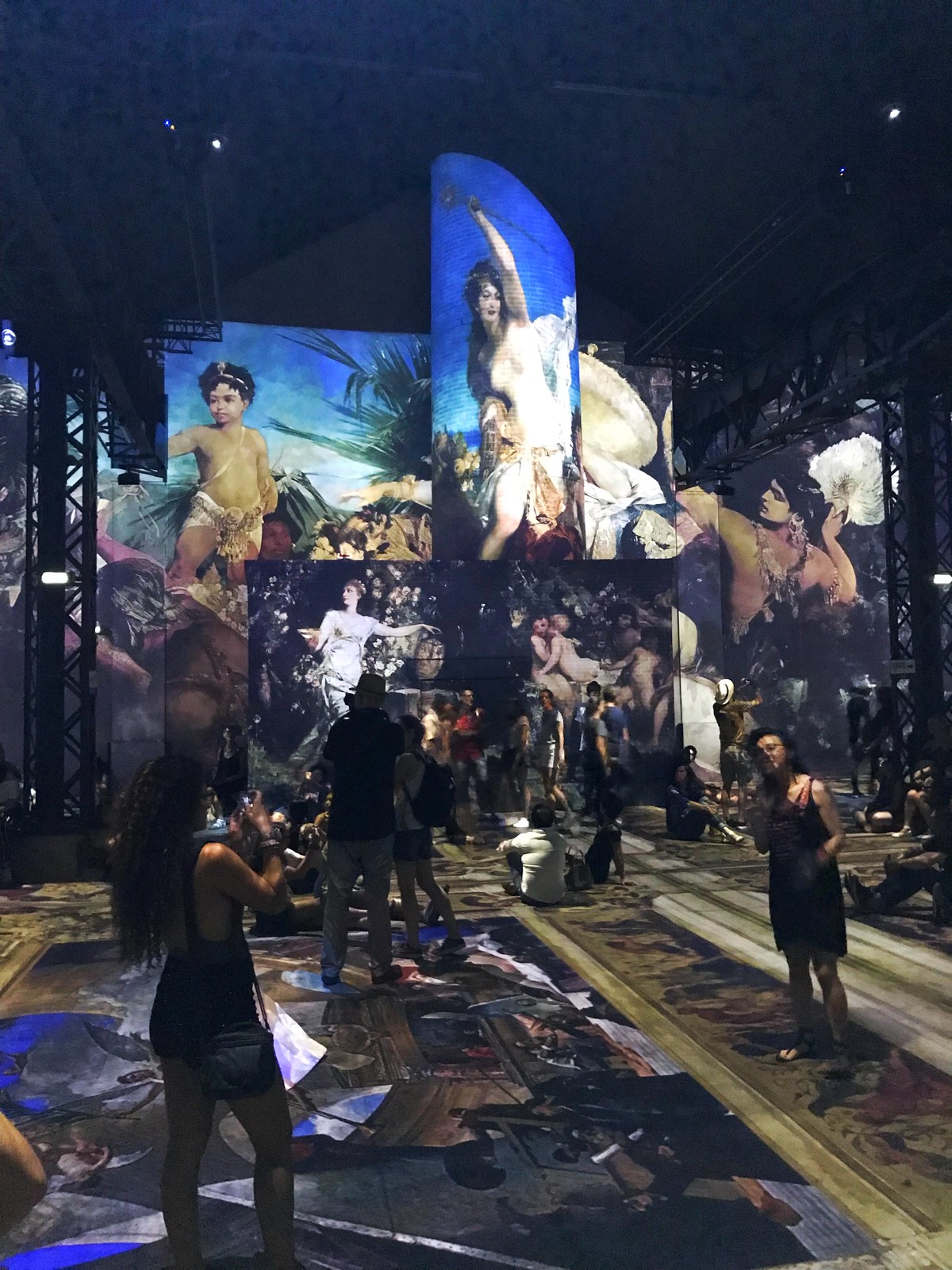 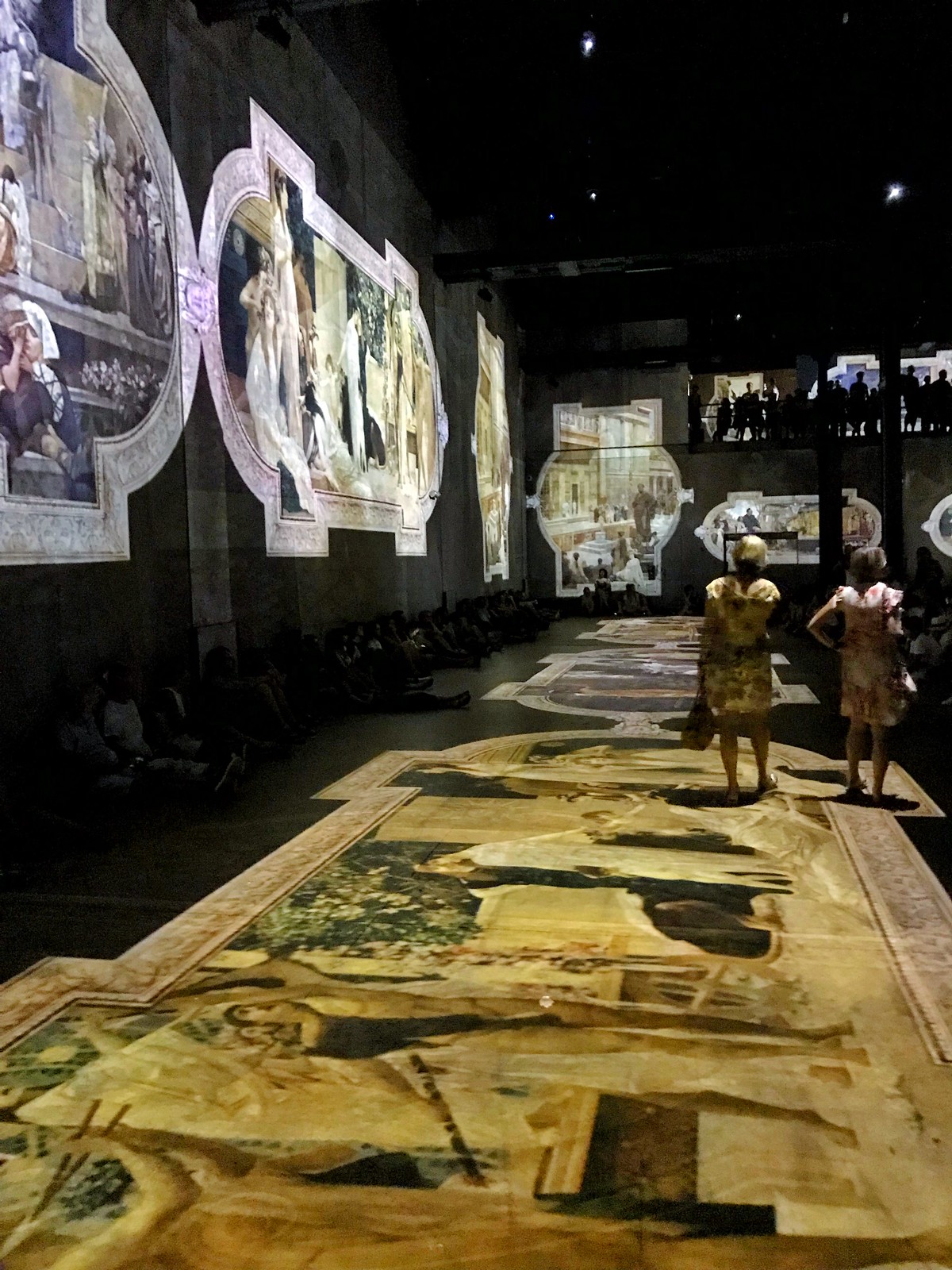 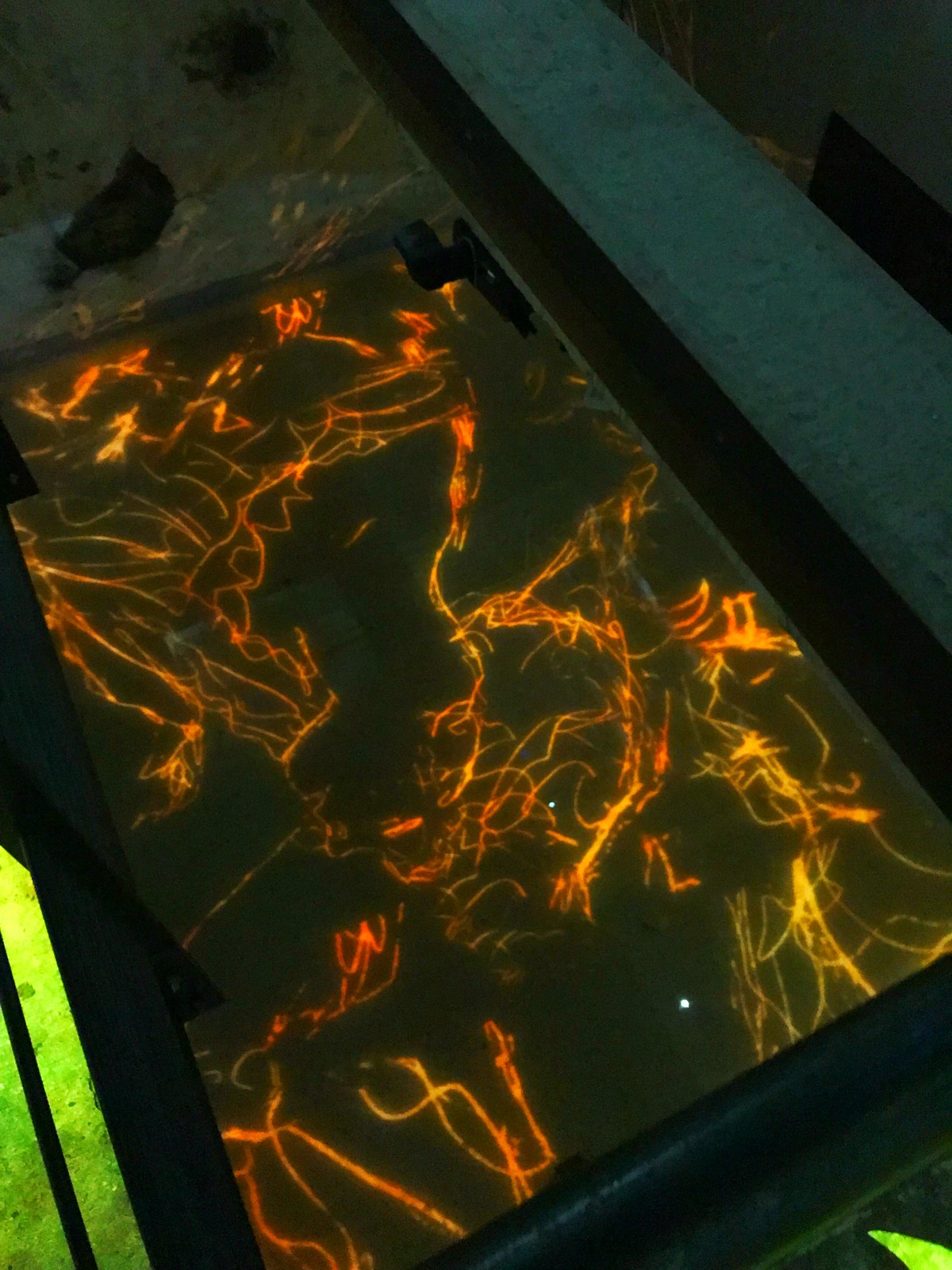 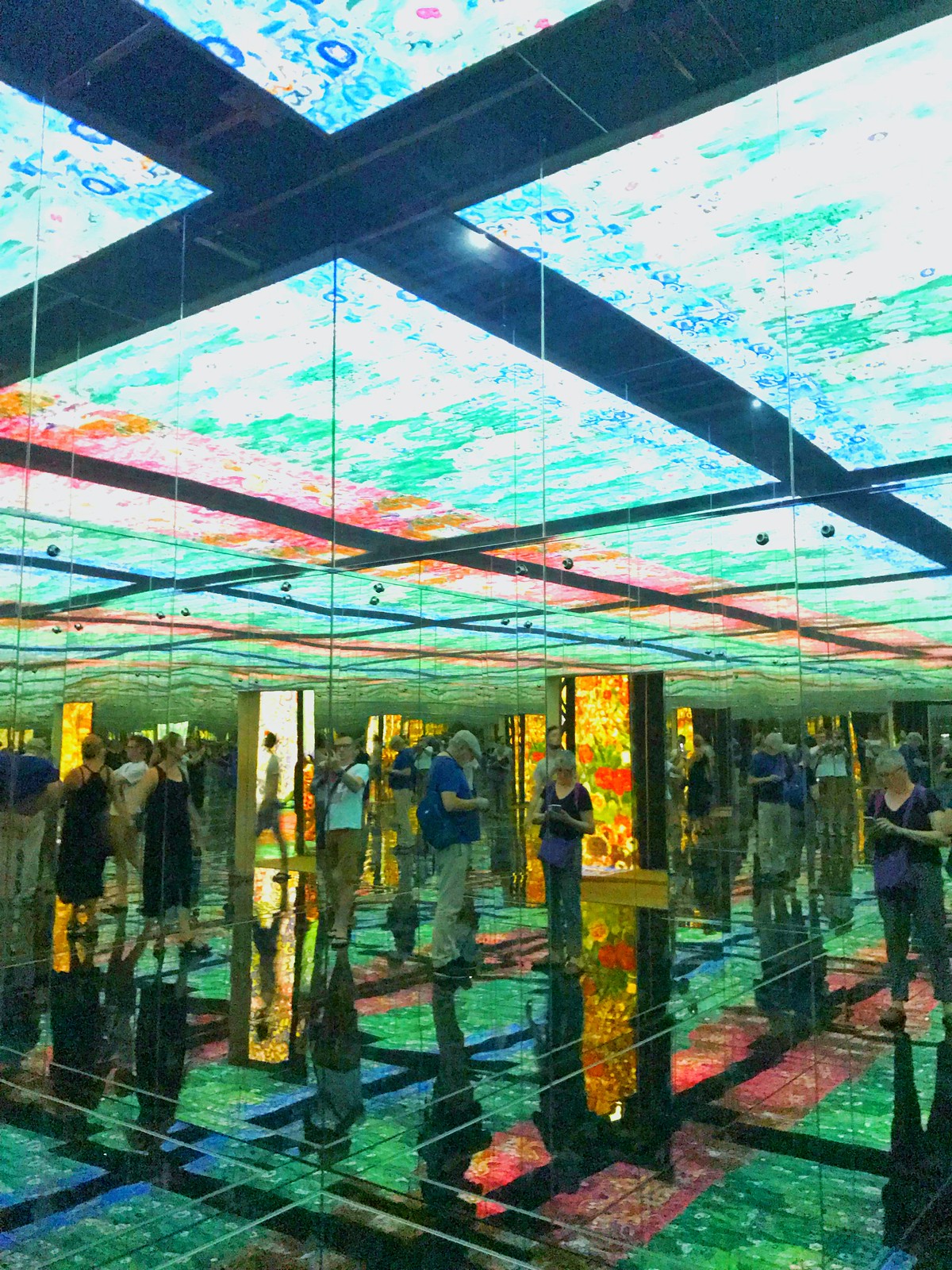 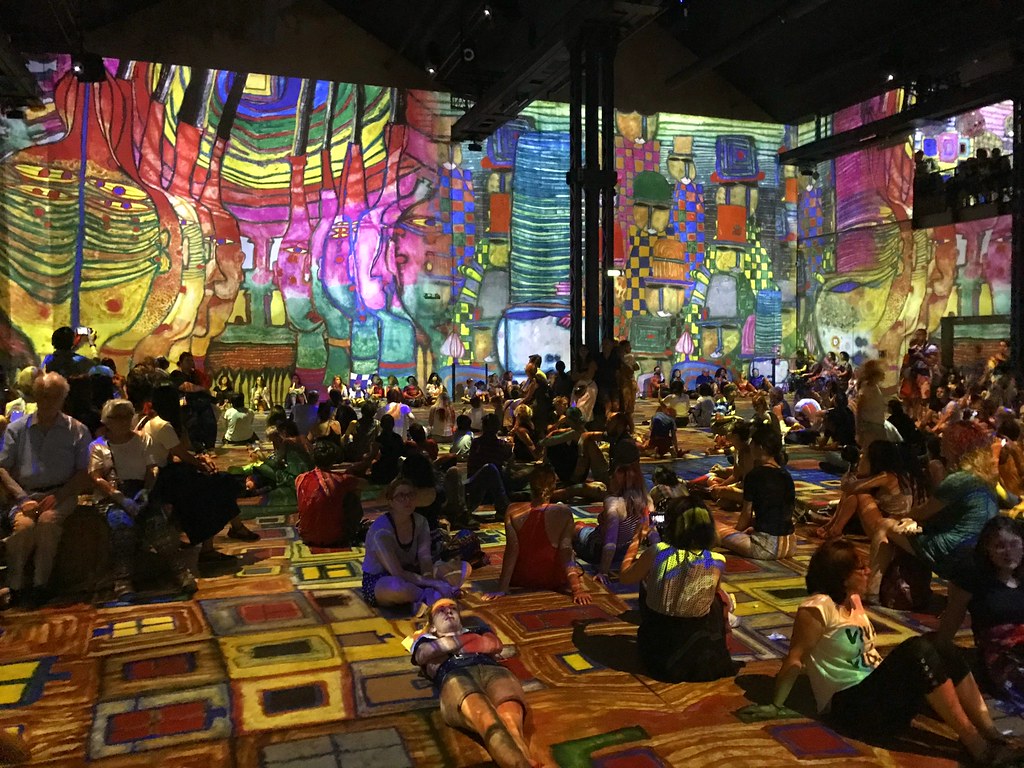 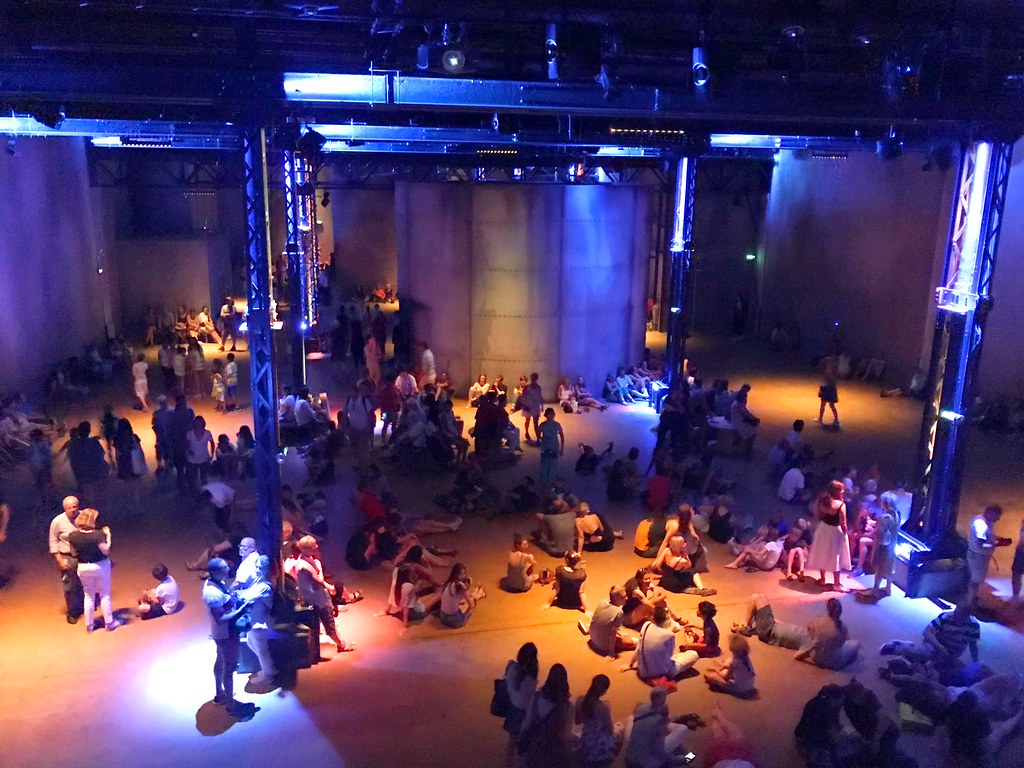 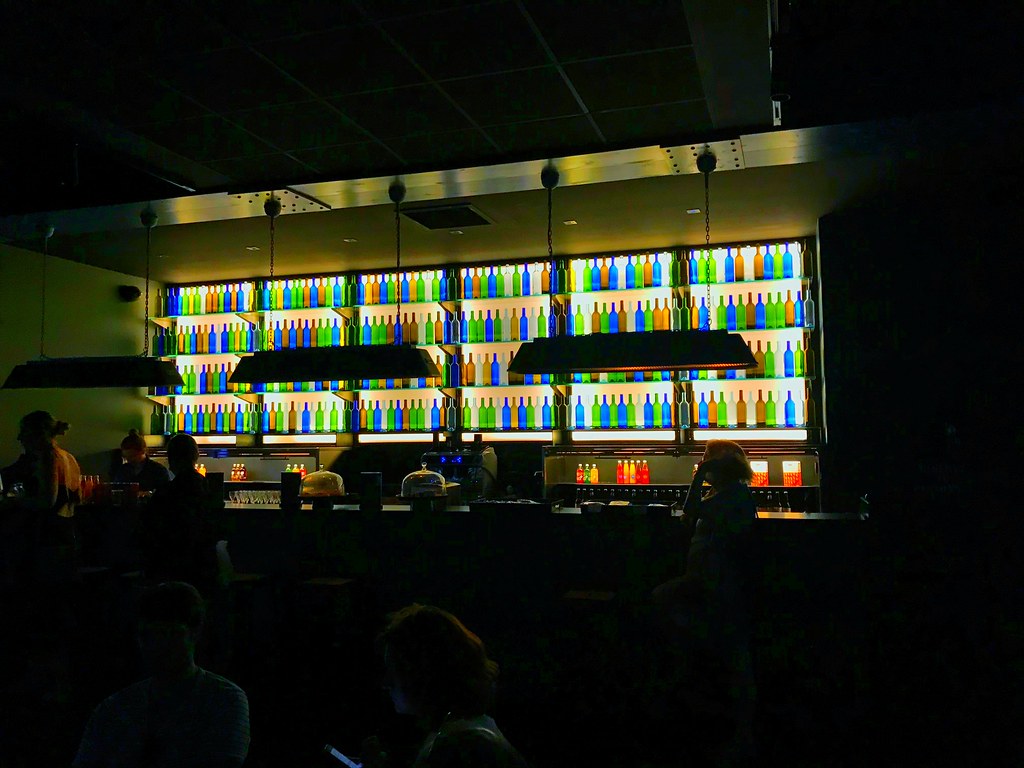 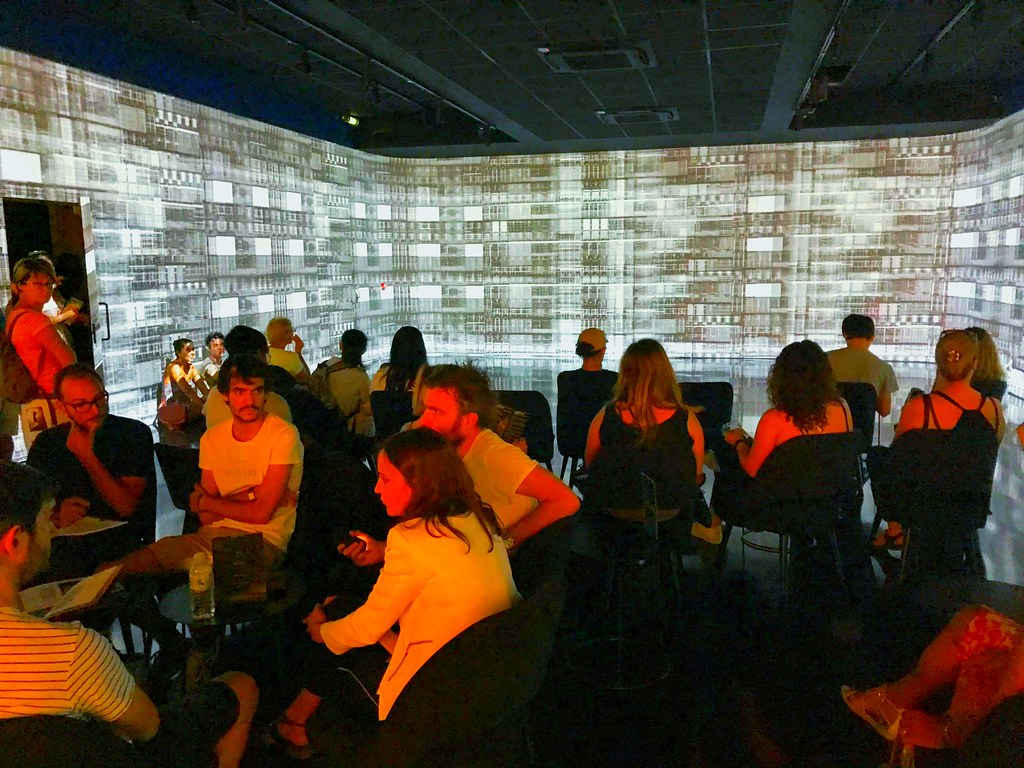 The idea behind the place is pure genuis. The visitors are of all ages, from all countries of the world (because there’s not text, the show is universal), the room can be adapted to any style of art, and allowing visitors to come at any time makes visiting simple.

Just one thing – make sure you book your tickets online. The ticket office at the entrance closes at 3pm most days, and is completely closed at the weekend (because it creates huge queues outside).

And don’t forget to check out the bookshop / giftshop before leaving. We never realised there were so many Klimt-related products! 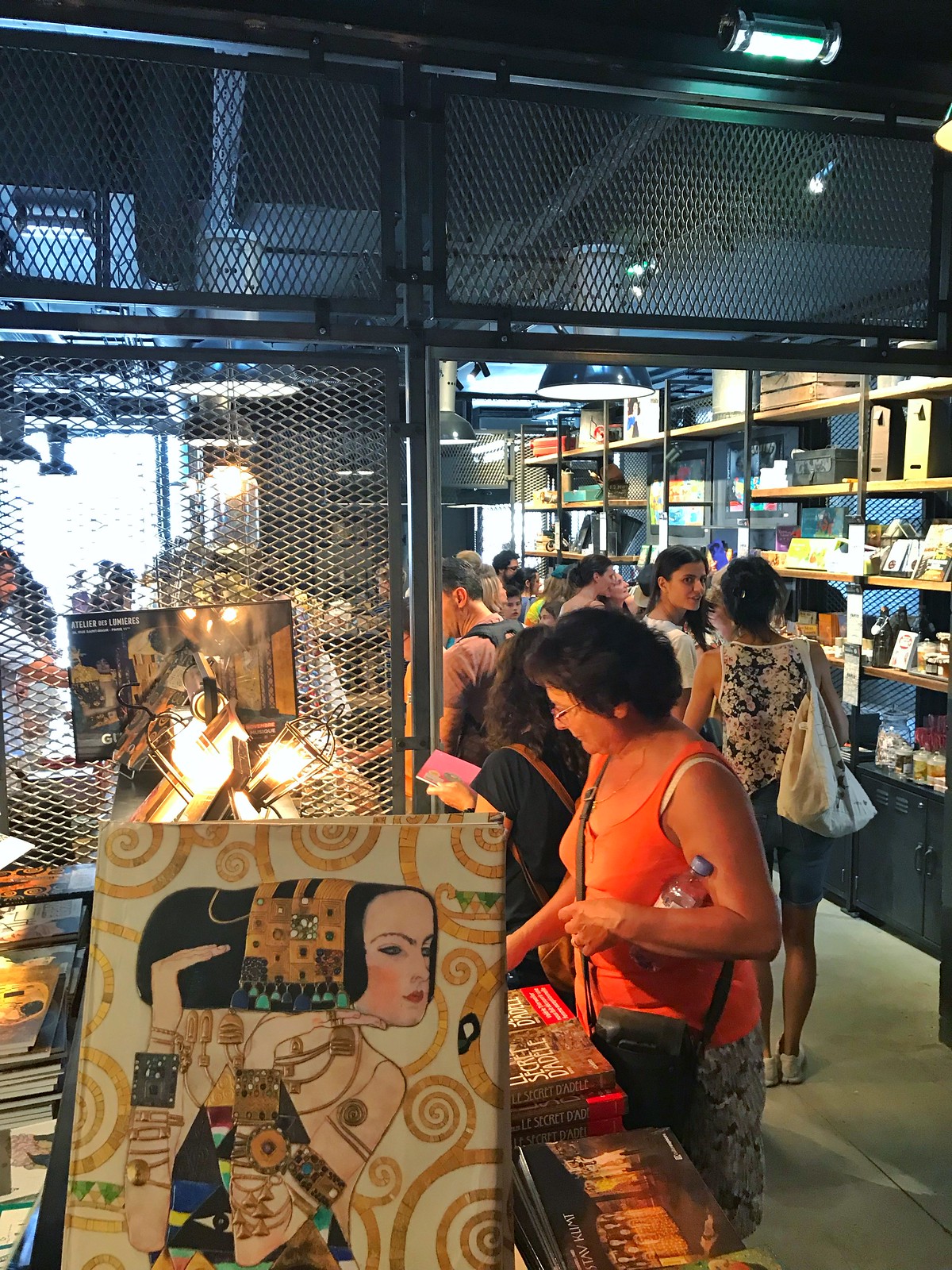 We’ll admit it – we were a little sceptical before visiting the Atelier des Lumières, but once inside we were amazed. It’s really a new approach to culture. Bravo!

Ticket office closed from 3pm onwards during the week, and completely close at the weekend